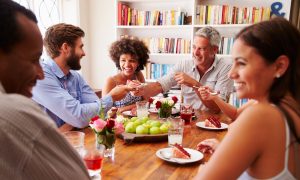 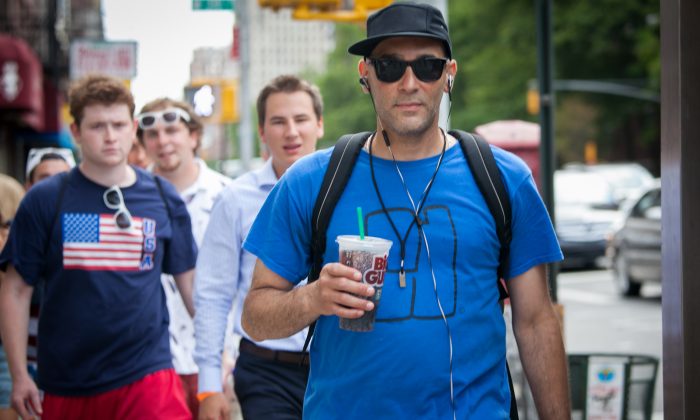 A man drinks a Big Gulp drink from 7-Eleven, in Manhattan, on June 26, 2014. Soda is one of the biggest sources of added sugars in the American diet. (Samira Bouaou/Epoch Times)
US

Why the FDA's new rule is controversial
By Andrea Hayley

Consumers have just scored a major victory against the sugar lobby, one that has the potential to reverse decades of debilitating chronic disease trends. For the first time ever, the FDA will require processed food manufacturers to inform consumers how much sugar has been added to their food.

The change is part of an overhaul of the ubiquitous Nutrition Facts label, the place where information such as calories, number of servings, and percentage of daily recommended amounts is listed on an estimated 800,000 packaged foods items.

The new line item for added sugar will allow consumers to see what has long been hidden from public view: that copious amounts of refined sugars are lurking in their salad dressings, beverages, condiments, and frozen dinner entrees.

Some of the other changes include the addition of line items for vitamin D and potassium, since these are key nutrients needed for bone and heart health, and the removal of vitamins A and C, since most people don’t have trouble getting enough of these in their diet.

Serving sizes will also change to reflect what people actually eat in one sitting, and the numbers of calories will be displayed in a larger font size. The changes will go into effect for most manufacturers in mid-2018.

It is estimated that 85 percent of processed foods contain added sugar, and it is a fact that Americans consume way more of it than what is considered healthy by most health professionals.

The position of most food manufacturers all along has been that a lack of exercise and overconsumption is to blame for our ill health.

Lauren Kotwicki, press officer for the FDA, said in an email, “There is strong and consistent evidence that healthy dietary patterns are characterized, in part, by lower intakes of sugar-sweetened foods and beverages.”

She added that with the previous label, consumers could not tell how much added sugar was in a product, since the line item for sugar did not differentiate between naturally occurring and added sugars. Under the new rules, a 20-ounce bottle of coke would be listed as 130 percent of the recommended daily allowance of added sugars, according to The Associated Press.

Kotwicki said the FDA recognizes that added sugars can be a part of a healthy dietary pattern, but “if consumed in excess, it becomes more difficult to also eat foods with enough dietary fiber and essential vitamins and minerals and still stay within calorie limits.”

Sugar is a carbohydrate, which is one of the three major macronutrients the body needs, along with protein and fat. In addition to sugar, starch, and fiber are also carbohydrates.

For decades now, in response to consumer demand for reduced fat products (prompted by previous government recommendations), manufacturers have been replacing fat with sugar. Sugar is the most commonly used carbohydrate in food processing, since starch is generally tasteless, and fiber tends to decrease shelf life.

The reason we have increased consumption is that the sugar is addictive.
— Robert Lustig, M.D.

The problem is that chronic diseases with roots in diet and lifestyle have soared along with our increasing sugar consumption. However, correlation does not imply causation, and so scientists have been studying the effects of sugar on the human body, looking for proof of a link.

When I asked Robert H. Lustig, M.D., a professor of Pediatrics in the Division of Endocrinology at the University of California–San Francisco, about the science, he said there have been six studies published within the last three years that show causation between sugar consumption and four diseases: Type 2 diabetes, heart disease, fatty liver disease, and tooth decay. He was an author of three of them.

Lustig has dedicated his life to studying the health effects of sugar. He is well-known for his viral 2009 lecture “Sugar: The Bitter Truth,” which has received nearly 6.5 million views on YouTube.

The position of most food manufacturers all along has been that a lack of exercise and overconsumption is to blame for our ill health. They say its up to consumers to regulate what they eat. They also maintain that all calories are the same. Why single out sugar?

In response to the FDA’s new guidelines, the Sugar Association released a statement attacking the FDA: “The extraordinary contradictions and irregularities, as well as the lack of scientific justification in this rulemaking process are unprecedented for the FDA.”

Sugar from food in its natural state is processed differently in the body than refined sugars.

It also stated: “It is a fact that sugars, whether intrinsic or added, break down to glucose, fructose, and galactose, and the body can’t tell the difference.”

A proprietary survey of 152 doctors in the United States, Europe, and Asia found that 86 percent believed sugar consumption is linked to the development of obesity

But researchers are now able to show that sugar from food in its natural state is processed differently in the body than refined sugars and that added sugars lead to disease.

James J. DiNicolantonio, Pharm.D, another prominent voice in the sugar debate, said in an email that he and his colleagues “have shown it’s the ‘added’ sugars that drive Type 2 diabetes, hypertension, and cardiovascular disease,” and he sent links to the published studies.

The difference has to do with how added sugars are metabolized (chemically transformed) in the body. The new science has far-reaching implications for the prevention of disease, the future of our food and agriculture industries, and ultimately, what we eat.

Major investment banks Credit Suisse and Morgan Stanley have both examined the science about sugar and published research reports based on the enormous potential impact of sugar-related disease on the economy and what that means for investors. Morgan Stanley even talked about the dangers in terms of “diabesity,” referring to the twin killers obesity and diabetes.

Credit Suisse estimates the global health care costs due to obesity are already in excess of $600 billion. For Type 2 diabetes, the costs are $470 billion globally and $140 billion in the United States alone.

Back in 2013, when Credit Suisse published “Sugar: Consumption at a Crossroads,” scientists had not yet proven a causal link for the dangers of sugar consumption. However, a proprietary survey of 152 doctors in the United States, Europe, and Asia found that 86 percent believed sugar consumption is linked to the development of obesity, 91 percent believed there was a link to Type 2 diabetes, and 74 percent to non-alcoholic fatty liver disease.

Lustig says he is not surprised by the sugar lobby’s denial of the science.

“This is their gravy train, their juggernaut, what allows their profit margins to soar,” he said. “The reason we have increased consumption is that the sugar is addictive,” he added.

Lustig pointed out that until the American Psychiatric Association changed its definition for addiction (DSM-5) in 2013, it was difficult to show that sugar was addictive because it was hard to separate the effect of caffeine in most sugary drinks from the sugar.

While sugar exists in dozens of forms, such as brown sugar, cane sugar, corn syrup, invert syrup, and honey, there are two that are most common, and the sugar market is dominated by them, according to the Credit Suisse report.

When you consume whole food—the fiber, starch, fat, and protein that are intrinsic in the food—work together to assist the body’s metabolism.

The first is sucrose, or common table sugar, which accounts for 82 percent of the sugar market. It comes from either refined sugar cane (75 percent) or sugar beets (20–25 percent). This includes raw sugar, organic sugar, powdered sugar, and so on—anything that you scoop and add to food or drink.

The second is high fructose corn syrup (HFCS), which is the most common form of sugar used in carbonated beverages. It accounts for 7 percent of the total market, and corn is its source.

The remainder of the sugar market is comprised of chemically processed, high-intensity sweeteners such as saccharin, aspartame, sucralose, and the only naturally occurring option, stevia, which comes from a plant.

Lustig and others have discovered that fructose, making up 50 percent of the disaccharide sucrose (also known as table sugar) and making up as much as 65 percent of HFCS, has a particularly negative metabolic effect in the body when it’s consumed as an added sugar.

While Lustig can explain the biochemistry in excruciating detail (which he does in his video), the simplified version is that fructose can only be metabolized by the liver, and the liver can’t handle it in large quantities.

“It overwhelms the liver, and the mitochondria [in the liver] have no choice but to turn the fructose into liver fat,” Lustig said.

To put this into perspective, he says glucose, the other common form of sugar in the body, is metabolized by all of the body’s organs, and only 20 percent goes to the liver.

One of the most interesting studies on this issue to date is published by Lustig in the journal “Obesity.”

It involved 43 Latino and African-American youth between the ages of 8–18, all of whom were obese. After baseline tests were completed, their food was catered for nine days, and tests were done again.

Their diet was not necessarily healthy. It wasn’t filled with vegetables. It simply aimed to maintain the same caloric intake as before and only restricted added sugar consumption, which had been around 400 calories a day for the youth. Weight was carefully monitored, and more food was given if weight loss occurred, according to the study.

The reduced sugar diet resulted in significant reductions in diastolic blood pressure, lactate, and LDL-cholesterol, which are all improved markers for metabolic health. Study participants also showed improvements in glucose tolerance and hyperinsulinemia. “Every aspect of their metabolic health got better,” Lustig said.

The good news is that recently, with increased public awareness, consumption of sugar is starting to decline in some developing countries, including the United States.

The decline is uneven and tends to be led by people with higher levels of income and education. In North America, yearly consumption was down 7 kilograms (about 15 pounds) per person between 2001 and 2011, according to the FAO, cited by the Morgan Stanley report.

The report’s authors also suggest that not enough attention is being given to the decline and its impact on industry.

They point out that carbonated soft drinks are the biggest category losers, with annual growth in the market segment at 1.1 percent compounded annually, versus 5.4 percent for other bottled drinks.

Coca Cola, PepsiCo, and Dr Pepper Snapple Group are the most exposed, the report says, and they account for 75 percent of the global market.

Major Sources of Added Sugars in the American Diet