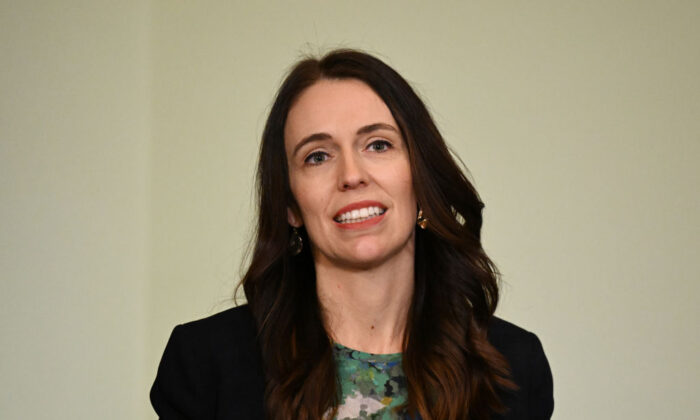 Ardern Warns Against ‘Black and White’ View of Competition With Beijing

Prime minister says no need to frame Ukraine conflict as "democracy vs. autocracy"
By Rebecca Zhu

Rebecca Zhu
Rebecca Zhu is based in Sydney. She focuses on Australian and New Zealand national affairs. Got a tip? Contact her at rebecca.zhu@epochtimes.com.au.
View profile
Follow
and Daniel Y. Teng

New Zealand Prime Minister Jacinda Ardern has spoken out against framing the conflict in Ukraine and countering ongoing Chinese aggression through a “black and white” lens, saying nations do not need to choose between autocracies or democracies.

Ardern’s latest views stand in stark contrast to that of U.S. President Joe Biden, who has vowed to fight for a free and open Indo-Pacific region against increasing Chinese aggression.

“This is what this is about, democracy vs. autocracy—we have to make sure democracy is delivered,” Biden said in May.

In a speech to Australia’s Lowy Institute on July 7, Ardern instead, appeared to soften her language towards Beijing arguing that many countries had played a role in the Pacific region for many years.

“It would be wrong to characterise this engagement, including that of China, as new,” she said. “It would also be wrong to position the Pacific in such a way that they have to ‘pick sides.’”

“These are democratic nations with their own sovereign right to determine their foreign policy engagements. We can be country neutral in approach, but have a Pacific bias on the values we apply for these engagements.”

She said there was a need to ensure the region remained from coercion and that nations should engage with multilateral bodies like the Pacific Islands Forum.

“Ultimately, rather than increased strategic competition in the region though, we need instead to look for areas to build and cooperate,” she said.

“The honest reality is that the world is bloody messy. And yet, amongst all the complexity, we still often see issues portrayed in a black and white way. This is one of the challenges to an independent foreign policy.”

Ardern said the world was “bloody messy” and pointed to the Ukraine conflict as an example.

She said the war was “unquestionably illegal and unjustifiable” and Russia “must be held to account.”

“While there are those who have shown overt and direct support, such as Belarus, who must also see consequences for their role, let us not otherwise characterise this as a war of the west vs. Russia. Or democracy vs. autocracy,” she said.

“It is not,” she added. “Nor should we naturally assume it is a demonstration of the inevitable trajectory in other areas of geostrategic contest.”

“We won’t succeed, however, if those parties we seek to engage with are increasingly isolated and the region we inhabit becomes increasingly divided and polarised.”

She summed up her government’s foreign policy as: collectivism or global cooperation, values, and place.

Ardern said multilateral institutions like the United Nations was “imperfect” and have failed.

“And when they do fail, our first port of call must always be to find ways to make them stronger.”

She said there was no better failure than that of the UN’s response to the war in Ukraine because of Russia’s position on the Security Council.

“A morally bankrupt position, in the wake of a morally bankrupt, and illegal war. Under these circumstances, waiting for our multilateral institutions to act was not an option for New Zealand.”

Ardern’s stance on Beijing has noticeable softened in recent weeks, with her latest speech calling for “shared interests” to be pursued.

Yet previously the Labour government appeared firmly aligned with allies the United States and Australia.

During a visit to the White House in May, Ardern told reporters New Zealand was in an “increasingly contested” region and that engagement in the area had to be “on our terms, respectively” and not in response to Beijing.

In a joint statement by the United States and New Zealand, the governments expressed “grave concerns” on the Chinese Communist Party’s (CCP) human rights record.

Later, during the NATO summit in Madrid in June, Ardern said the CCP, in recent times, had become “more assertive and more willing to challenge international rules and norms.”

“We must respond to the actions we see,” she said.

In response to both speeches, Beijing rejected Ardern’s comments warning that they were “not helpful” for deepening trust between the two countries.

The spokesman of the Chinese Embassy in New Zealand claimed the regime would be “willing” to work with New Zealand through “win-win cooperation” by having mutual respect and dropping differences.