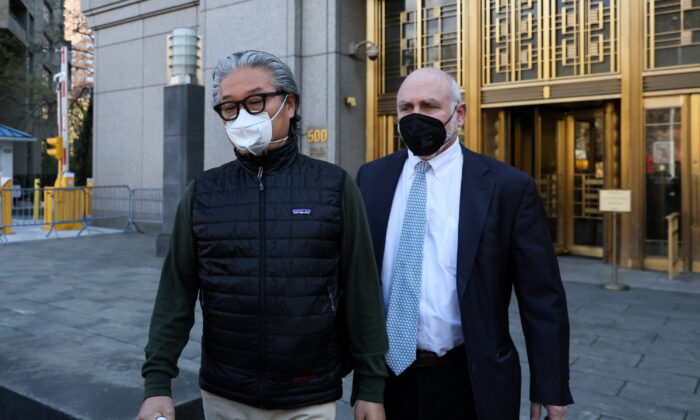 Sung Kook (Bill) Hwang, the founder and head of a private investment firm known as Archegos exits the Manhattan federal courthouse in New York on April 27, 2022. (Shannon/Reuters)
Crime and Incidents

NEW YORK—Archegos Capital Management LP made a last-ditch effort to falsely persuade banks its survival was not at stake in an unsuccessful bid to forestall the sudden collapse of the $36 billion private investment firm, U.S. prosecutors said.

The accusation came in a 12-page letter filed on Thursday night in Manhattan federal court, where Archegos’ owner Sung Kook “Bill” Hwang has pleaded not guilty to 11 charges of fraud, market manipulation, and racketeering conspiracy.

Prosecutors said Archegos misled banks dozens of times in the six months before its March 2021 demise about its liquidity and how concentrated its portfolio was, in order to borrow money and make huge bets on stocks through total return swaps.

The letter said Archegos’s strained finances led to a March 24, 2021 meeting where senior executives including Hwang and co-defendant Patrick Halligan, then its chief financial officer, decided to falsely tell banks that the firm’s inability to meet margin calls was “a liquidity issue, not a solvency issue.”

Those counterparties began unwinding Archegos’s positions on March 26, 2021. The New York firm’s collapse caused about $10 billion of losses at banks including Credit Suisse and Nomura, and wiped out more than $100 billion of shareholder value.

Lawrence Lustberg, a lawyer for Hwang, said in an email the new accusations appeared to confirm that Hwang had “nothing to do” with any misrepresentations to banks. He also said he was confident the case would end in Hwang’s “complete vindication.”

Prosecutors said the letter will give Hwang and Halligan, who has also pleaded not guilty to their April 2022 indictment, “awareness of the types—and often the very words—the government will use as examples” to prove their guilt at trial.

The next case conference is on Sept. 8. No trial date has been set.