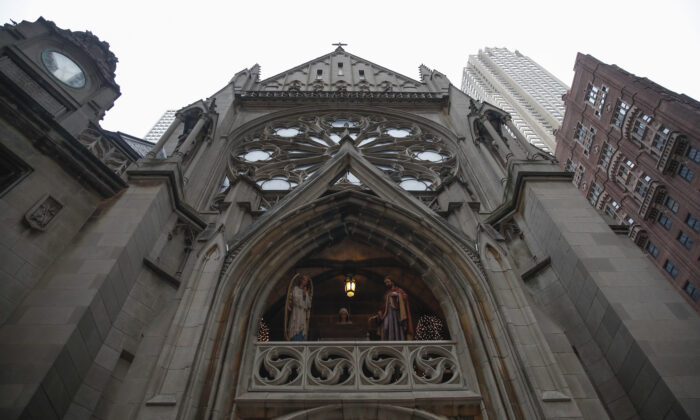 The Archdiocese of Chicago in Chicago, Illinois, on Jan. 2, 2019. (Kamil Krzaczynski/AFP via Getty Images)
Illinois

An $800,000 settlement has been reached between the Archdiocese of Chicago and individuals who accused five clergymen of sexual abuse, lawyers for the plaintiffs have confirmed.

The claims were made against five religious leaders, including the Rev. George Clements, a prominent black Catholic priest, and civil rights activist who marched with Martin Luther King Jr. in Chicago, Alabama, and Mississippi.

He also became the first Catholic priest in the Chicago area to adopt a child in 1981.

Clements served as pastor at Holy Angels Parish in the Bronzeville neighborhood from 1969 to 1991, as well as a number of other parishes in Chicago, and became the second black priest to be ordained in the Chicago Archdiocese.

In August 2019, shortly before his death, an allegation of sexual abuse was made by a now 54-year-old Chicago-area man who said he was between 7 and 12 years old when the abuse occurred.

The victim claims that the alleged abuse took place between 1974 to 1979 while Clements was pastor of Holy Angels Parish in Bronzeville.

At the time, Cardinal Blase Cupich, who serves as archbishop of the Archdiocese of Chicago, asked Clements “to step aside from ministry” while an investigation was launched.

Clements told the Chicago Sun-Times in 2019 that the allegation was “totally unfounded.”

But Boston-based attorney Mitch Garabedian, who represents the abuse victim, confirmed to the Sun-Times on Tuesday that the settlement between the Archdiocese of Chicago and alleged victims was reached in February.

Garabedian said that the alleged abuse was “the worst you can imagine” and took place “at least 20 times” between 1974 to 1979 in the church rectory—where priests reside—in Clements’s car, and also during a camping trip.

“When my client reported the abuse to his mother, his mother locked him in the closet and said, ‘Don’t ever talk about Father Clements like that again,’” Garabedian said.

Garabedian said the settlement was the result of investigation and mediation, noting that because the claim fell outside of the statute of limitations, a lawsuit was not filed, the Chicago Tribune reported.

Attorney Garabedian said the $800,000 in settlement money will also be shared by the alleged sex-abuse victims of four other Catholic clergymen who were based in Chicago, according to ABC 7 Chicago.

The Epoch Times has contacted a spokesperson for the Archdiocese of Chicago for comment.