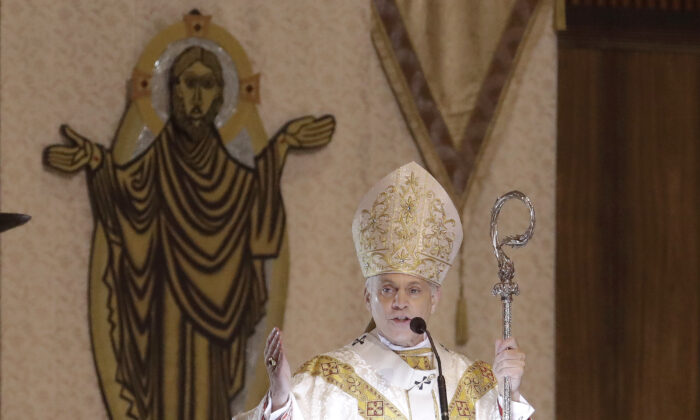 Archbishop Who Barred Pelosi From Communion Passed Over in Promotion

The archbishop who recently made waves by announcing that he was barring House Speaker Nancy Pelosi (D-Calif.) from Communion due to her outspoken support of abortion was passed over in Pope Francis’s latest cardinal assignments.

The pope chose as a cardinal Bishop Robert McElroy of San Diego, who has previously said that bishops shouldn’t forbid politicians who support abortion from taking Communion despite Catholic teachings being clear that abortion is a moral evil.

McElroy was one of 21 cardinals named, but the only one from the United States. He received the promotion despite Archbishop Salvatore Cordileone—who denied Pelosi Communion—being of higher rank.

McElroy said in a statement that he was “stunned and deeply surprised” by the appointment as a cardinal, which means he will be part of a body that selects and advises popes.

McElroy is scheduled to be installed on Aug. 27 during a ceremony in Rome.

Cordileone congratulated McElroy, noting that he served in San Francisco before leading the diocese of San Diego.

McElroy and Cordileone became the faces of opposing views in the Catholic Church on abortion in 2021. Cordileone at the time said that human life begins at conception and abortion “deeply wounds the woman and destroys the foundation of a just society,” adding that those of the Catholic faith “must be a voice for the voiceless and the powerless” and that “there is no one more defenseless than a child in the womb.”

Because Communion is only meant for true believers, or people who follow the teachings, people who support abortion shouldn’t be allowed to take it, Cordileone said.

McElroy challenged that view, saying that bishops and others who were moving to exclude pro-abortion politicians such as President Joe Biden from Communion were wrong. He said the Communion was “being weaponized for political ends” and wondered why bishops were focusing on support for abortion and euthanasia as opposed to racism.

Pope Francis seems to share McElroy’s position, telling reporters in 2021 that he never refused Communion for anybody and that bishops should manage problems “as pastors” lest they take “a political stance on a political problem.”

“What must the pastor do?” he said at the time. “Be a pastor, don’t go condemning. Be a pastor, because he is a pastor also for the excommunicated.”

Afterward, the U.S. Conference of Catholic Bishops, which had been weighing communicating clearly that bishops should deny Communion to abortion supporters, issued a document whose only apparent reference to such a matter said that “lay people who exercise some form of public authority have a special responsibility to embody Church teaching in their service of the common good.”

But Cordileone on May 20 announced that he was barring Pelosi from receiving Communion, citing how she’s become even more pro-abortion over the years while using her Catholic faith as justification for her stance.

“After numerous attempts to speak with her to help her understand the grave evil she is perpetrating, the scandal she is causing, and the danger to her own soul she is risking, I have determined that the point has come in which I must make a public declaration that she is not to be admitted to Holy Communion unless and until she publicly repudiate her support for abortion ‘rights’ and confess and receive absolution for her cooperation in this evil in the sacrament of Penance,” he said.

The move drew support from other bishops, but not all.

Pelosi decried the action, calling it “very dangerous,” and questioned why people who support the death penalty weren’t likewise punished.