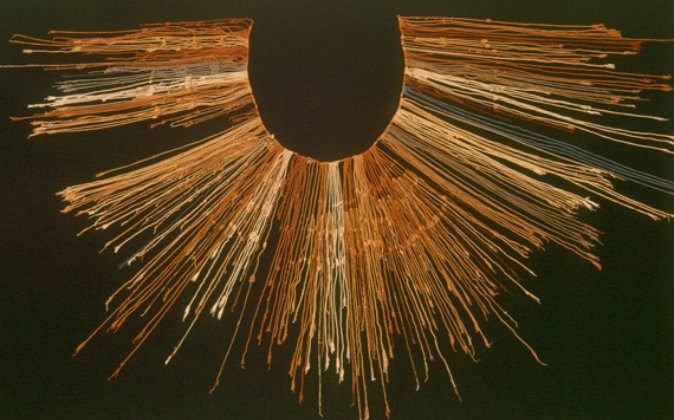 An Inca quipu, from the Larco Museum in Lima. (Wikimedia Commons)
archaeology

Archaeologists Uncover Ancient Mathematical Devices of the Inca in Peru

A team of archaeologists have discovered twenty-five well preserved quipus, an ancient form of record-keeping used by the Inca, in the archaeological complex of Incahuasi in Peru, according to a report in Peru This Week.  The finding is rare and significant because the quipus were found in ancient warehouses rather than in burials, as most discoveries in the past.

Quipus, sometimes called ‘talking knots’, were recording devices historically used in the region of Andean South America. A quipu usually consisted of coloured, spun, and plied thread or strings from llama or alpaca hair, or made of cotton cords. For the Inca, the system aided in collecting data and keeping records, ranging from monitoring tax obligations, properly collecting census records, calendrical information, and military organization. The cords contained numeric and other values encoded by knots in a base ten positional system. A quipu could have only a few or up to 2,000 cords. Together the type of wool, the colours, the knots and the joins held both statistical and narrative information that was once readable by several South American societies. In some villages, quipus were important items for the local community, and took on ritual rather than recording use.

The discovery took place at Incahuasi (Inca House), located in the valley of Cañete, close to the town of Lunahuana. Built in the 15th century, it is the most important and strategic city built by the Incas in the region. It is kind of a small Cusco, as it is the exact image of this Inca city, built by orders of Inca Pachacutec. It comprises four sections: the palace of the Inca, the quarters with its barns and warehouses, the convent city, and the fortress.

Many of these quipus were destroyed by the Spanish conquistadors in the 16th century, but approximately 200 of them dating no earlier than about 650 AD have been found.  The conquistadors realized that the quipucamayocs (‘quipus authority’) often remained loyal to their original rulers rather than to the king of Spain, and quipucamayocs could lie about the contents of a message. The conquistadors were also attempting to convert the indigenous people to Roman Catholicism. Anything representing the Inca religion was considered idolatry and an attempt to disregard Catholic conversion. Therefore, most quipus were destroyed by the conquistadors who considered the quipus to be idolatrous.