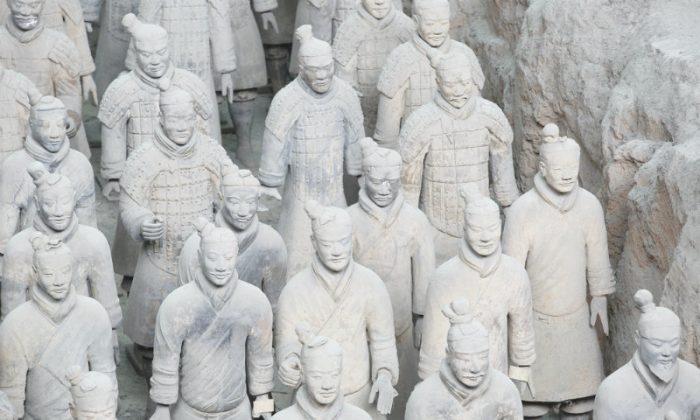 Chinese archaeologists have uncovered numerous graves in Shaanxi Province, which are believed to be the tombs of the craftsmen who created the world-acclaimed Terracotta Warriors discovered near the mausoleum of China’s first Emperor Qin Shi Huang (260-210 BC), according to a news report in China Daily.

The 2,200-year-old Terracotta Army lies in the greatest mausoleum in the world, and archaeologists believe that it was meant to protect Emperor Qin Shi Huang in his journey after death. Each soldier was created with unique characteristics and was placed according to rank.  They were also equipped with new weapons, which would allow the army to defend their king in the afterlife. Historical documents suggest that soon after Emperor Qin Shi Huang ascended to the throne in 246 BC, he began work on his tomb near Xi’an, China. The massive effort required 700,000 labourers, many of whom were convicts or people who were in debt to the empire. As part of the huge project, craftspeople sculpted about 8,000 colourful warriors — likely using real human beings as inspiration — and those warriors wore stone armour and “wielded” lances, swords and crossbows.

Archaeologists at the Shaanxi Provincial Institute of Archaeology discovered a total of 45 tombs about 5km from the mausoleum.  The crypts were found with skeletal remains of people believed to have been buried in a coffin with their leg twisted. According to archaeologist, twisting leg of the dead before burying was a burial custom of the Qin Dynasty.

“The Terracotta Warriors and horses, as well as the other rare relics unearthed from the funerary pits next to the emperor’s mausoleum, might have been made by the people interred in the 45 tombs,” excavation leader Sun Weigang told the China Daily. Archaeologists found a number of artifacts containing the Chinese characters for Li, which was a township established in 231 BC near the place where the emperor’s mausoleum would be built.  More than 30,000 families moved into Li in 212 BC for the construction project.