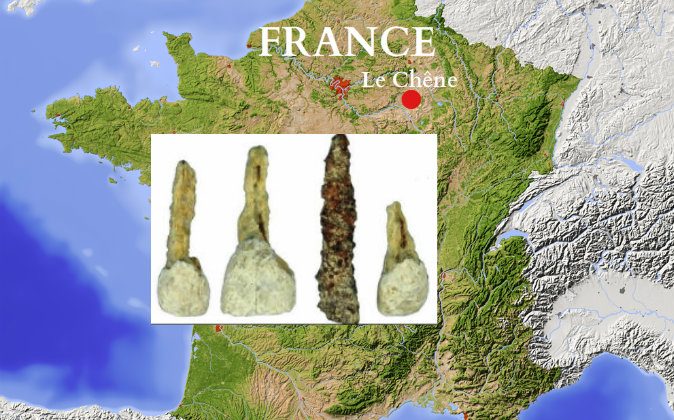 Photo of dental implants (Screenshot/GeoBeats News/YouTube), believed to be 2300-years-old, were discovered in a furnished burial chamber in Le Chêne, France. (Shutterstock*)
archaeology

A study published in the journal Antiquity has revealed the discovery of an Iron Age tooth implant among the remains of a Celtic woman in northern France. The implant is the oldest of its kind discovered in Western Europe, according to a report in The Guardian.

The finding was made in a 2,300-year-old richly furnished burial chamber in Le Chêne, France. The iron implant, which is the same size and shape as incisors from her upper jaw, was found alongside the rest of her teeth. It is believed that the iron pin was covered with a wooden- or ivory-carved tooth.

Excavation of teeth; the iron pin dental implant is indicated to the left of the teeth. (Screenshot/GeoBeats News/YouTube)

“The teeth were in an anatomical position, with the molars, pre-molars, canines and incisors. Then there was this piece of metal. My first reaction was: what is this?” said Guillaume Seguin, who excavated the young woman’s skeleton.

The teeth were taken away for a closer look. It was discovered that the woman had 31 teeth rather than 32, and the iron pin was in place where the missing tooth would have been. Although not known for certain, it is believed that the implant was added after death to make the woman look beautiful in her tomb, as hammering the pin into the jaw of a living person would have been extremely painful, and could have caused a fatal infection.

Dentistry, in some form or another, has been practiced for at least 9,000 years, although tooth extraction and remedies for tooth aches probably go back much further. The study of ancient remains from around the world has demonstrated the ingenuity that existed in the application of surgical and cosmetic dental practices going back many millennia. The Indus Valley Civilization has yielded evidence for the earliest form of dentistry, in the form of bow drills, which date back to 7000 BC.

In ancient Egypt, Pharaonic physicians were no strangers to reconstruction works: there have been three instances of a dental bridge: one or more lost teeth reattached by means of a gold or silver wire to the surrounding teeth. In some cases, a bridge was made using donor teeth. However, like the latest discovery, it’s a bit unclear whether these works were performed during the life of the patient or after death – to tidy them up, as it were, before their burial.

*Imageof a map of France via Shutterstock.