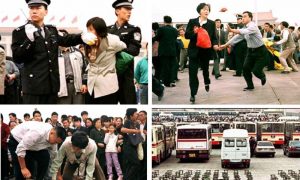 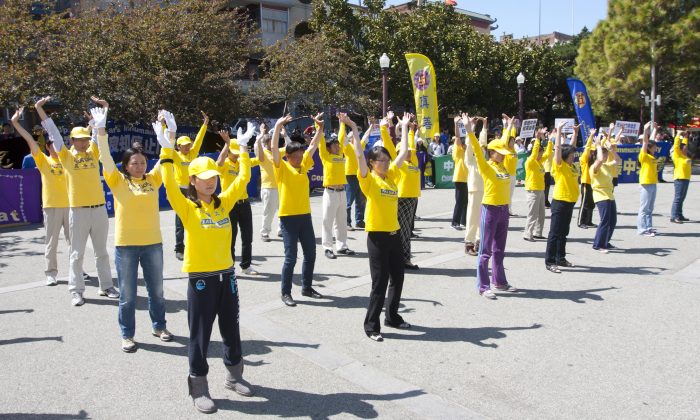 Falun Gong practitioners demonstrate the first exercise during a rally to commemorate “April 25” in San Francisco’s Chinatown on April 21, 2013. More than 10,000 practitioners gathered in central Beijing on April 25, 1999, to protest the discrimination of their practice in the largest demonstration since the Tiananmen Square protests. (Alex Ma/The Epoch Times)
Northern California

SAN FRANCISCO—Last Sunday, Jie Li reflected on an fateful day 14 years ago, an event in Beijing that changed her life forever—and that of millions of fellow Falun Gong practitioners.

The protest of April 25, 1999, probably the biggest demonstration in central Beijing since the Tiananmen Square protests, put Falun Gong in the global limelight for the first time and gave the Chinese regime a pretense to wage a harsh persecution against practitioners.

Hundreds of Bay Area Falun Gong practitioners came together in San Francisco’s Chinatown on April 21 to commemorate the incident, which evokes strong memories for many. For staying true to their beliefs, many have lost friends and family to the Chinese forced labor camp system, and many have lost their homeland.

In 1999, Li was a senior in college and was looking for a job in Beijing. Like many of her friends, she practiced the traditional spiritual discipline called Falun Gong, striving to better herself by following the principles of truthfulness, compassion, and tolerance.

Falun Gong, also called Falun Dafa, was hugely popular in China at that time, with an estimated 70 million adherents. In the mornings she went to the park to practice the meditative Falun Gong exercises, and on many evenings she met with a group to study the teachings.

In one of these study groups in late April 1999, she learned that 40 practitioners of Falun Gong had been beaten by police and arrested in Tianjin, a city 80 miles west of Beijing. A large number of practitioners had been quietly sitting outside the Tianjin Education College, protesting an article in the college’s magazine that slandered their practice.

Falun Gong practitioners saw this incident in Tianjin as an escalation of previous acts of intimidation at practice sites throughout the country.

The police in Tianjin told practitioners that their orders had come from the central office, so if they wanted to appeal, they should go to Beijing.

Li felt compelled to go to explain to the authorities what Falun Gong is really about. She believed this to be a misunderstanding and that the regime would listen.

“We wanted to tell the government that Falun Dafa is good. They cannot beat you and put you into jail without a proper reason,” said Li, who now lives in San Jose and works for a local radio station.

On April 25, like thousands of other practitioners from around the country, she headed to the national appeals office, the only channel through which Chinese citizens can voice grievances to the central government.

Besides the release of the jailed practitioners in Tianjin, practitioners asked to have a non-hostile environment in which to practice, and to allow the printing of Falun Gong books, which had been banned since the mid 1990s.

Most of the practitioners, including Li, did not know exactly where the appeals office was, only that it was adjacent to Zhongnanhai, the Party leadership compound in central Beijing.

Upon arrival, she followed the policemen’s orders that directed the thousands of practitioners who kept streaming in, to line up around Zhongnanhai.

These 10,000 practitioners waited for 16 hours on the streets surrounding Zhongnanhai before a spokesman was allowed to enter the appeals office. They left that night after it was announced that their demands would be met.

After the incident, the regime began reporting that Falun Gong practitioners had encircled the government compound, creating a “pre-fabricated picture,” wrote Ethan Gutmann, an award-winning author on China issues, in the Epoch Times.

While the practitioners stayed peaceful and orderly throughout, the Chinese regime later called this incident “laying siege to the Zhongnanhai central government compound,” a view that was mirrored widely in Western media.

“April 25 was simply the unfolding of an elaborate bait and switch with Falun Gong as the pats,” Gutmann wrote.

The regime used the incident as a pretext to justify its persecution, which had actually been planned for years, said Gutmann, who lived in Beijing at the time.

“We did not aim at Zhongnanhai. We went to the petition center,” Li said. “I was there. I know what happened.”

For Li and many other practitioners, April 25 was a turning point. Before that incident, she believed the regime was simply misinformed. “This is first time I found out that the government would lie to the people,” she said.

While practitioners only wanted to practice peacefully and live their lives normally, it was the communist regime that made the appeal seem like an act of defiance against them, he said.

“It’s absurd that a government would feel threatened by having millions of kind, honest, and peaceful citizens,” Leining said. “That tells you what kind of … system that must be.”

The Falun Dafa Information Center has documented more than 3,600 cases of practitioners who have died through torture and maltreatment in China’s labor camps since the persecution began in July 1999. Observers like Gutmann, however, expect the number to be much higher.