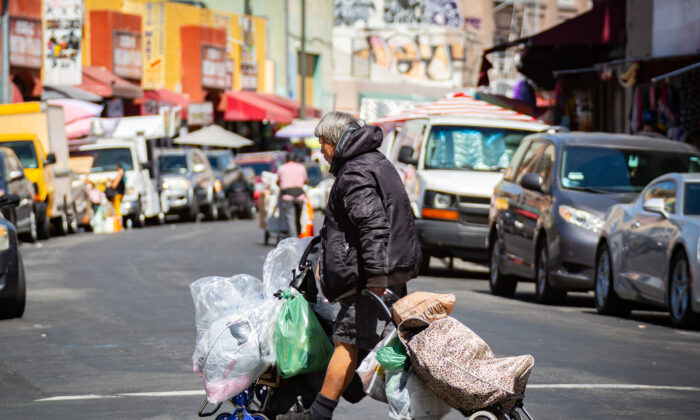 LOS ANGELES—Applications are open through Nov. 7 for the city’s guaranteed basic income pilot program, which will give $1,000 a month to 3,000 households for a year.

The nearly $40 million BIG:LEAP (Basic Income Guaranteed: Los Angeles Economic Assistance Pilot) program is the largest of its kind in the United States.

“Its name perfectly captures what we’re doing here in L.A. because we’re taking a big leap forward in our generational fight to end poverty,” Mayor Eric Garcetti said on Oct. 27.

Only households with at least one dependent child will be considered, and recipients must live in the city of Los Angeles, be over the age of 18, and have an income at or below the federal poverty line. They also must have experienced economic or medical hardship related to the COVID-19 pandemic.

More than a quarter of the recipients will come from Price’s District 9. Price said on Oct. 26 that his district office, at 4301 S. Central Ave., would serve as a command center during the application window to assist constituents. Additional sites—including the Vermont Square Branch Library, Ascot Branch Library, Junipero Serra Branch Library, the All Peoples Community Center, and Trade-Tech College—will provide computers, Wi-Fi, and language support to help District 9 residents apply.

Garcetti said officials looked at data from a smaller GPI program in Stockton while developing the pilot, and research showed that the 125 Stockton residents who received $500 per month were more than twice as likely to secure full-time jobs as people in a control group.

“They landed full-time employment because they could afford to take that job interview that before they couldn’t. Maybe instead of two jobs, they could have one, and they were able to get full-time employment more than twice the rate of nonrecipients,” Garcetti said, citing findings by Stacia West of the University of Tennessee’s College of Social Work and Amy Castro Baker of the School of Social Policy and Practice at the University of Pennsylvania.

Critics of the programs often cite opposition to handing out money without restrictions on how it can be spent.

“If it’s the government’s money, they should absolutely be able to control how it’s spent. You don’t want people going out and buying cigarettes and booze with this,” said Jon Coupal, president of the Howard Jarvis Taxpayers Association, a nonprofit that seeks to defend the rights of taxpayers. “It would be more consistent with existing programs, for example the SNAP program, the food stamp program; you get vouchers to buy food. Same with Section Eight housing, you get vouchers to purchase housing.”

On Oct. 26, the city council approved $27.4 million for the program citywide, which includes about $3.4 million for Price’s district. Price’s office will provide another $6 million from its Guaranteed Basic Income Funds.

The offices of Council Districts 6, 8, and 10 also provided funding from their offices’ GBI funds, totaling more than $5 million.

The council also approved nearly $4 million for research and design services related to the pilot program.

The city partnered with academics to study the program’s impact on factors such as recipients’ mental health, food security, housing security, employment, homelessness, parenting, family dynamics. Garcetti said he hopes the program, as the largest sample in the U.S., will provide data to the state and federal governments in hopes of larger such programs being implemented.