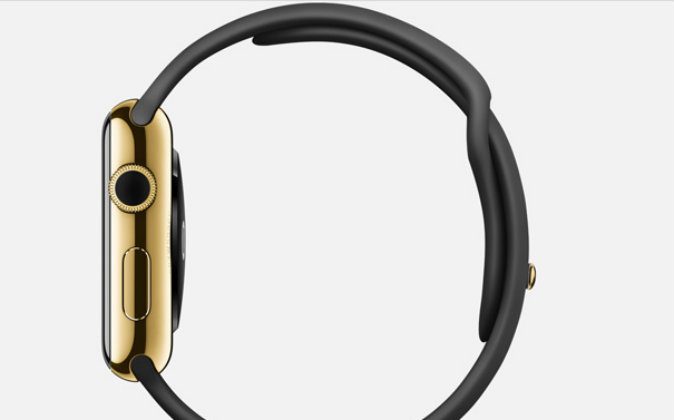 That golden Apple Watch Edition looks good, but expect your wallet to take a hit if you go for it.

Chad Rickicki, a watch expert in Pittsburgh, Pennsylvania, quoted some estimates of the Gold Apple Watch Edition to Tech Crunch.

Assuming that the golden colored Apple Watch Edition is made out of solid gold alloy using 18-karat gold, and given the smartwatch’s size and shape, it could cost about $600 to make just the case.

After factoring in the electronics, the Gold Apple Watch Edition price could double to about $1,200 when it retails in 2015.

Back in April, KGI Securities analyst and reliable Apple product tipster Ming-Chi Kuo speculated that the Apple Watch would cost “several thousand dollars,” so Rickicki’s estimate might not be far off the mark.

Apple will also be launching a lower end sport version of the watch starting at $349, and a standard Apple Watch which should cost more.

NEW YORK (AP) — Apple is a habitual party crasher, but can the company’s history of arriving late and making a big splash in various gadget categories continue with the Apple Watch?

The technology company was a late entrant into many of its most prominent product categories: the iPod wasn’t the first digital music player and the iPad wasn’t the first tablet. But in most cases, the innovation the company infused into its devices ignited previously dormant markets __and Apple products became “must haves.”

Smartwatches have been around for a few years, but makers such as Samsung and Sony have failed to make them a runaway hit.

Apple’s stated entry into the smartwatch arena this week with a gadget that won’t go on sale until early 2015 raises questions: Can the company work its magic as it has in the past and convince people that they really need a smartwatch —or will this time be different?

Experts say Apple is likely to stimulate interest in smartwatches, but they contend that the company must overcome a few hitches before its device can succeed.

Wearable devices is a small but growing area that technology companies are hoping to capitalize on as the smartphone and tablet usage grows. Citi Investment Research estimates the market for smartwatches will be $1.4 billion to $1.8 billion this year and could grow to $10 billion by 2018.

But no company has cracked the formula for a mass-market success. The entire “wearables” category includes sport fitness bands, watches and other apparel —everything from Fitbit’s $99 Flex fitness tracker and Nike’s $99 Fuelband fitness monitors to Samsung’s $199 Galaxy Gear smart watch. Experts say the Apple Watch’s real test will come when developers begin to develop apps for the gadget, which is Apple’s first brand-new product introduction in four years.

“What separates Apple from the others is partially the design itself —it’s a lot more elegant than other offerings— as well as the Apple ecosystem and (software) developer opportunity,” said Susquehanna Research analyst Chris Caso.

Forrester analyst James McQuivey said some Apple Watch features, like the controller knob on the side and the emphasis on different watch sizes and style options for watch bands and clasps, could help the watch stand out.

“Apple has unique strengths to make something elegant and attractive,” McQuivey said. He compared theApple Watch to Apple’s earlier innovations like the iPod and its trademark white earbuds.

“They made it something you wanted to be seen carrying,” he said. “You have (an iPod) just to make people see that you have it. Even people who didn’t buy it knew what it was.”

McQuivey predicts a successful launch but not quite as big a launch as Apple’s iPad. He believes the company will ship 10 million units by the end of 2016.

“You only need 10 million to hit that tipping point, then millions of more people will want one suddenly, he said.

By comparison, research firm IDC forecasts that about 4 million smartwatches will be sold this year, more than double the 1.7 million sold in 2013. The top brands are Samsung and Pebble.

Canaccord Genuity analyst Michael Walkley gives an even rosier outlook, forecasting 14 million will sell during fiscal 2015 and 25 million in fiscal 2016.

“We believe our estimates could prove conservative, as we were impressed with the design, user interface, and features included in Apple watches,” he said in a client note. “We believe the fitness and health features are the most compelling in terms of driving sales of the new product category for Apple and could also drive stronger demand than our initial estimates.”

Even so, there are a few sticking points that could keep the device from being a success. The first is its price tag, which starts at $349. Several analysts said that’s more than they were expecting.

“There may be consumer concern about the price,” said eMarketer senior analyst Cathy Boyle. “It’s going to catch a lot of people’s attention, but adoption is going to be gradual.”

The Apple Watch faces a few other problems: lt’s unclear how long the battery lasts and the watch won’t ship until early 2015, disappointing those who were hoping to get or give one as a holiday gift. It also has to be tethered to an iPhone via Bluetooth for some functions, including GPS.

“The lack of GPS or Wi-Fi natively on the device will require an iPhone to be nearby for most tasks, which both limits some near-term use cases,” said Raymond James analyst Tavis McCourt. “But it provides ample fodder for upgrade opportunities in the future.”

The long lead time before the product ships could mean the device will be more functional once it’s released, since app developers have more time to create apps specifically for the watch. And Apple is loading the device with fitness apps and an Apple Pay digital wallet service that might appeal to some consumers who are on the fence.

“The intention (of showing the watch months before it ships) is to show the developer community they have an elegant industrial design, but to make it really useable and exciting you have to have apps for it,” said Susquehanna Research analyst Caso. “Apple is playing the long game here for sure.”