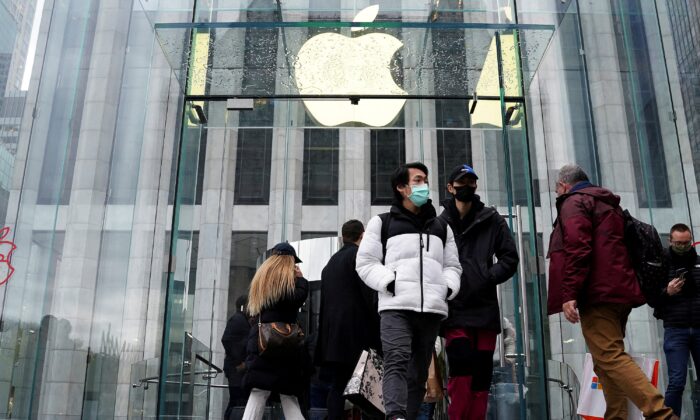 People leave the Apple Store on Fifth Avenue on Black Friday, in the Manhattan borough of New York on Nov. 26, 2021. (Carlo Allegri/Reuters)
Businesses in COVID-19

Apple announced on Dec. 23 that it has temporarily closed at least eight retail stores in the United States and Canada since Dec. 22, as cases of the Omicron variant surged among customers and employees, according to an article from Bloomberg.

At least eight further stores were recently shut and reopened before the latest round, in Texas, Maryland, Hawaii, Ohio, and Ottawa, while another store at Lincoln Road in Miami Beach remains shut.

Apple also temporarily closed a location in Charleston, South Carolina back in August.

The store closures typically last a few days each, with such closures becoming increasingly common in recent weeks.

The company policy is to close an Apple store when roughly 10 percent of staff members test positive for the virus.

“We regularly monitor conditions, and we will adjust our health measures to support the well-being of customers and employees,” said Apple in a press statement.

“We remain committed to a comprehensive approach for our teams that combines regular testing with daily health checks, employee and customer masking, deep cleaning and paid sick leave.”

In the Bloomberg report, Apple stated that “all of its workers are tested regularly and that it only reopens stores once each employee is tested again.”

Apple said in early December, that it would indefinitely delay its return to office plans for corporate employees.

Omicron and the other variants have been affecting businesses across the country since the new wave hit the United States at the beginning of the month.

Retail companies like Apple have been scrambling to take voluntary action.

Apple has started to limit occupancy inside its retail stores to promote social distancing.

It has also restored its mask mandate across all of its U.S. locations and has reinstalled the plexiglass dividers to protect employees.

To satisfy virus-concerned shoppers, the company is offering free same-day delivery service until Christmas Eve with an incentive to order online.

On Dec. 22, Apple rolled out the free two-hour holiday delivery for its products in “most metro areas,” which will wave the standard $9 shipping fee.

State and local authorities across the United States are reinstituting previous COVID-19 restrictions, such as mask mandates, or space restrictions, and more recently, vaccine and booster shot requirements.

The Biden administration announced on Dec. 21 that it would assist state governments in battling the variant by distributing 500 million COVID-19 home test kits for free and offering military medical personnel if required.