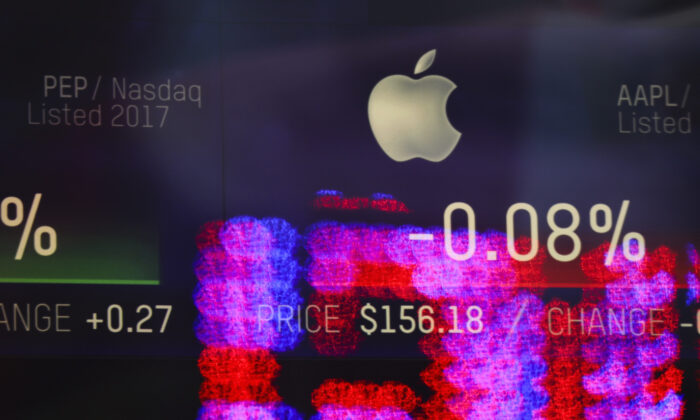 A file image of stock numbers for Apple displayed on a screen at the Nasdaq MarketSite in Times Square in New York City, on Jan. 29, 2019. (Drew Angerer/Getty Images)
Media & Big Tech

Apple has announced plans to raise salaries for U.S. workers by at least 10 percent in a tight labor market that’s pushing companies to boost wages to attract and retain workers who face growing cost-of-living pressures from high inflation.

The tech giant said in a statement that it is expanding its compensation budget, hiking the minimum starting wage to at least $22 per hour.

“This year as part of our annual performance review process, we’re increasing our overall compensation budget,” said a company spokesperson.

The wage bump amounts to around 10 percent more than a year ago and around 45 percent higher than in 2018.

The Labor Department said in its most recent monthly Job Openings and Labor Turnover Survey (JOLTS) that job openings, which are a measure of labor demand, rose to 11.5 million on the last day of March, the highest level in the history of the data series.

At the same time, a record number of American workers quit their jobs as of the last business day in March, as businesses struggled to hire enough workers to meet demand.

A number of major corporations, including Bank of America and Microsoft, have responded by boosting salaries. Microsoft said in a statement earlier in May that it was planning to “nearly double” its budget for wage hikes, while Bank of America recently announced it was raising its minimum wage to $22 an hour.

Small businesses have been struggling to find workers to fill open positions, with a recent jobs report from the National Federation of Independent Business (NFIB) showing that 47 percent of all small business owners reported job openings they couldn’t fill. And among those owners who were actively trying to fill open positions, 93 percent said there were few or no qualified applicants.

The pay hikes and business hiring woes come as inflation in the United States has been hovering around a 40-year high. Consumer prices have risen faster than wages, eroding purchasing power and amplifying cost-of-living pressures on workers, especially those in lower income brackets.

The average U.S. employee made $31.85 an hour in April, according to a May 6 report from the Bureau of Labor Statistics, which is a 5.5 percent increase from April of last year when the average was at $30.20 an hour.

At the same time, consumer price data released on May 11 shows that the pace of inflation within the same period came in at 8.3 percent, which means that inflation effectively gave the average worker a pay cut of 2.8 percent.

In an interview earlier in May, Allianz chief economic adviser Mohamed El-Erian said that the inflation problem in the United States will inevitably turn into a cost-of-living crisis as price pressures become broader and further erode the wage gains of many American households.

In an interview on CNBC’s “Squawk Box,” El-Erian was asked about real, inflation-adjusted wages declining in April and what the implications are for the economy of inflation outpacing wage gains and making products less affordable to American households.

“It’s just a matter of time until we talk about a cost-of-living crisis—and this is what it is,” he added.

Some economists have warned that persistently high inflation could lead to a de-anchoring of future inflation expectations, drive workers to demand higher pay, and fuel a 1970s-style upward wage-price spiral.