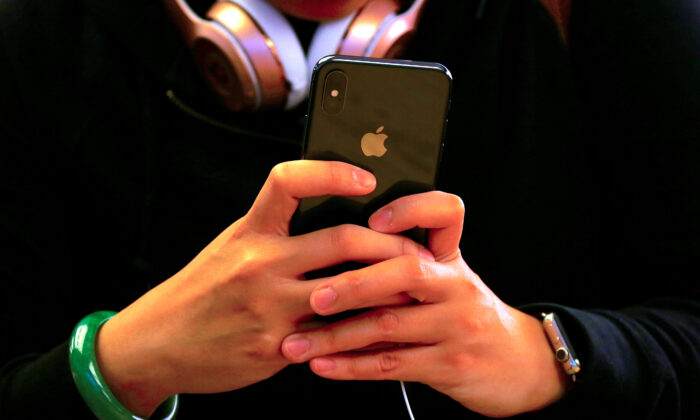 A customer holds the iPhone X during the global launch of the new Apple product in central Sydney, Australia, on Nov. 3, 2017. (David Gray/Reuters)
Tech News

Apple is testing a new feature that will allow iPhone owners to unlock their device using Face ID even while wearing a mask, according to tech YouTuber Brandon Butch.

The feature is part of Apple’s new set of beta trials for the next version of its operating system called iOS 15.4 and comes nearly two years after masks were first introduced in the United States in an effort to lessen the transmission of COVID-19.

Butch, who creates videos about Apple products as well as other tech reviews, tutorials, and software update videos, shared screenshots of the new feature on Twitter.

A picture of the screen reads, “Face ID is most accurate when it’s set up for full-face recognition only. To use Face ID while wearing a mask, iPhone can recognize the unique features around the eye to authenticate.”

The feature will also work for phone owners who are wearing glasses at the same time as wearing a mask. However, they must be clear lenses and not sunglasses, 9to5Mac reports.

“Using Face ID while wearing a mask works best when it’s set up to recognize each pair of glasses you wear regularly. Face ID with a mask doesn’t support sunglasses,” a screenshot of the new feature reads.

The feature was also not supported on the 2018 iPad Pro models when 9to5Mac tried.

Previously iPhone owners were able to unlock their devices while wearing a mask so long as they had an unlocked Apple watch close enough to the phone.

However, the latest beta iOS 15.4 marks the first time that iPhone users will be able to directly unlock the device while wearing a mask using facial recognition.

The Epoch Times has contacted an Apple spokesperson for comment.

Apple’s latest beta trials for the new feature comes after the Centers for Disease Control and Prevention (CDC) updated its mask guidance on Jan. 14, advising more Americans to wear masks such as the N95 or KN95 respirators as opposed to loosely woven cloth masks in an effort to protect against COVID-19

The federal health agency also removed concerns regarding shortages of those kinds of masks and they should only be reserved for health care settings.