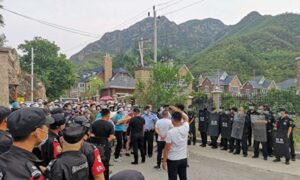 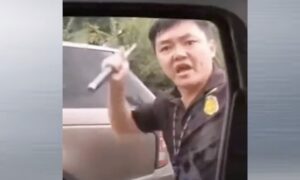 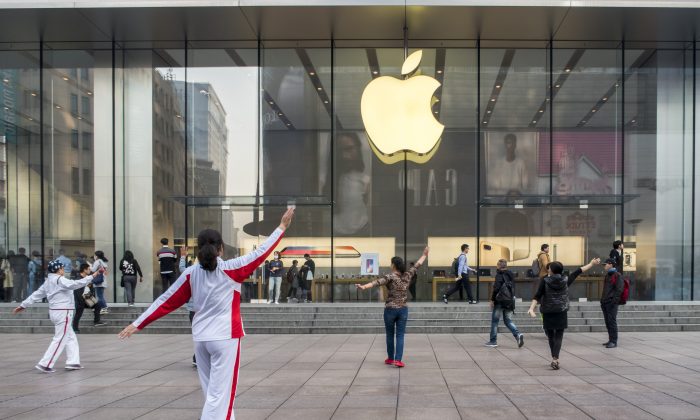 Elderly people perform square dance in front of an Apple store in Shanghai on Nov. 3, 2017. Apple is relinquishing control over its iCloud servers for Chinese users to a Chinese state-owned company in China, citing compliance with Chinese laws. (VCG via Getty Images)
China Human Rights

Users of Apple devices in China may have once had the expectation that they could store their data with the cloud storage offered by this Western company outside of the Chinese regime’s surveillance. In fact, their private data will soon be hosted by a company owned by the Chinese state, with intimate links to the People’s Liberation Army—uncomfortable facts the U.S. company has not told the millions of Chinese users of its devices.

On Jan. 10, Apple announced that the hand over to Guizhou Cloud Big Data (GCBD) of remote iCloud storage for Chinese users of its devices will occur on Feb. 28. Approximately 131 million iPhone users and millions of iPad and Mac users in China will be affected, as they either have to agree to new terms of service or have their iCloud accounts terminated.

Apple’s controversial decision to give away the access to its iCloud in China was announced in July 2017, as the tech giant claimed that it had no choice but to comply with the Chinese regime’s new cybersecurity law, which had gone into effect on June 1. The new law requires foreign companies to store all of the data originated from China on servers within China. GCBD is based in southwestern China’s Guizhou Province.

According to a number of Chinese business information websites, the 3-year-old company GCBD is registered as being fully owned by the Guizhou Economic and Information Technology Committee, which is a part of the Guizhou Provincial People’s Government. Nominally, the committee is subordinate to the Ministry of Industry and Information Technology of the State Council at the national level.

The committee, however, also goes by another official name—the “National Defense Industry Working Committee of Guizhou Provincial Party Committee” [of the Chinese Communist Party]. The practice of having two official names for one physical office is common across all levels of China’s civilian governments and Party apparatus, as the Chinese Communist Party asserts its power and control through such a mechanism. In this arrangement, the Party organization always calls the shots.

The exact functions of the National Defense Industry Working Committee are anyone’s guess; experts say that in one way or another it links back to China’s military. Officially, the committee and similar organs across various provinces of China are responsible for supervising the Chinese regime’s massive military-industrial complex used to equip and maintain the People’s Liberation Army (PLA).

The Chinese regime and the PLA are not just after the private data of Chinese Apple users, Lin said, but they could also be seeking technology behind Apple’s iCloud.

Ying-Yu Lin, a professor at the Institute of Strategy and International Affairs at Taiwan’s National Chung Cheng University, said that there is a definitive link between such a committee and the PLA. GCBD will more than likely give the PLA every access it desires within Apple’s iCloud servers in China, Ying-Yu said.

In a December 2016 interview with a state-run media outlet, Guizhou Economic and Information Technology Committee’s deputy director Wang Jian, who also serves as a ranking member of the Guizhou National Defense Industry Working Committee, openly admitted that one of the Committee’s “strategic” tasks is to integrate “big data” from civilian sources into the military, a process that he even referred to as “Operation Big Data.”

The words “civil-military integration” were mentioned a total of 83 times in Wang Jian’s interview, which he described as part of the broader Chinese regime policy to facilitate the flow of resources, data, and technologies from China’s civilian sphere into the military.

Ying-Yu Lin said that such statements from Chinese regime officials further confirm the connection between the PLA and GCBD, the company that is now getting control of all the private iCloud data stored by Chinese users of Apple devices.

The Chinese regime and the PLA are not just after the private data of Chinese Apple users, Lin said, but they could also be seeking technology behind Apple’s iCloud, which they could then use to empower PLA’s own battlefield management platforms, especially in areas related to cloud computing.

While Apple has not responded to The Epoch Times’ request for comment, its announcement to iCloud users in China and the new terms of service give no hint that GCBD is a state-owned company, let alone the fact that it could be freely accessed by the People’s Liberation Army.

Apple’s capitulation to the Chinese regime adds to the list of American companies that have been subjected to the forced transfer of technology and data, something that has become a hotly contested issue in U.S.–China trade relations, as the Trump administration has repeatedly pressed China to end such practices.