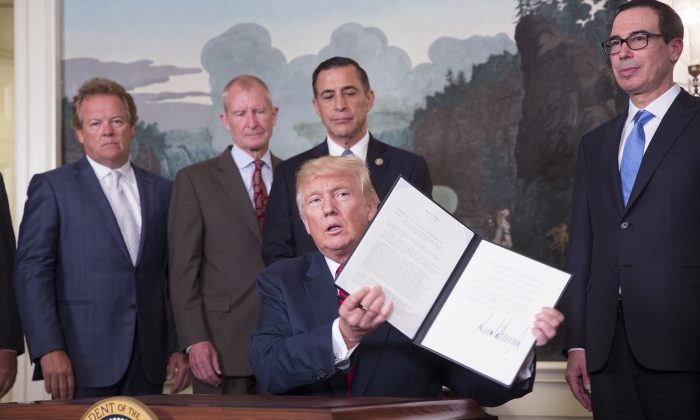 President Donald Trump is following through on his campaign promise to protect American innovation and technology.

On Aug. 14, Trump signed a memorandum to tackle China’s trade practices with regard to the theft and forced transfer of American intellectual property (IP). The memorandum directs U.S. Trade Representative Robert Lighthizer to determine whether a formal investigation into China’s trade policies is needed.

“The theft of intellectual property by foreign countries costs our nation millions of jobs and billions and billions of dollars each and every year,” Trump said before signing the memorandum.

“For too long, this wealth has been drained from our country while Washington has done nothing,” he said, criticizing former administrations’ trade policies.

State-sponsored intellectual property theft is a problem for the U.S. defense industry and our military capability. … We applaud President Trump for taking the necessary steps to protect our industry and our country.
— Thomas Kennedy, chairman and CEO, Raytheon Company

And China is the world’s top IP infringer, responsible for between 50 percent and 80 percent of all IP theft costs, according to the IP Commission’s estimates.

China uses many tactics to steal information, such as forcing foreign companies to partner with domestic firms and hand over their technology and know-how to gain access to the Chinese market. Companies are also asked to relocate their production, research and development, and data storage to the country.

China has also gained illegal access to the computer networks of U.S. businesses and has often stolen their commercial information, according to a fact sheet posted on the White House’s official website.

And 86 percent of all counterfeit goods worldwide come from China and Hong Kong, according to the U.S. Chamber of Commerce.

A previous Epoch Times investigative report revealed how the Chinese regime is stealing IP from American companies and universities, and selling the products made with the stolen innovations back to the United States at largely reduced prices.

“IP theft by thousands of Chinese actors continues to be rampant, and the United States constantly buys its own and other states’ inventions from Chinese infringers,” said the IP Commission report.

The U.S. government could have resorted to using World Trade Organization (WTO) rules to deal with the issue. Instead, it has chosen unilateral action by invoking Section 301 of the U.S. Trade Act of 1974 to authorize the U.S. trade representative to begin an investigation of IP theft by China.

“The White House is frustrated by the slow pace of the WTO,” Scott Kennedy, deputy director of the Center for Strategic and International Studies, told NTD, a sister media to The Epoch Times.

Therefore, the U.S. government is resorting to unilateral action to move the process along more quickly and get results in time that are beneficial for American industry, he said.

IP theft is a threat to the U.S. economy and its workforce.

Eighty-one industries are considered IP-intensive and they, directly and indirectly, accounted for 45.5 million jobs in 2014, representing nearly 30 percent of the U.S. workforce.

Ninety percent of the problems in the global trading system stem from China, according to the Information Technology and Innovation Foundation (ITIF), a U.S. think tank.

“The requirements to transfer technology and know-how through forced joint ventures are fundamentally at odds with the commitments China made when it joined the WTO,” said Stephen Ezell, vice president at the ITIF.

If the U.S. government penalizes China based on the results of an investigation, then the Chinese government may respond to it, according to Kennedy.

“So it could be the start of a back-and-forth that might result in a trade war,” he said.

U.S. companies welcomed the Trump administration’s effort to address a long-standing problem, according to the White House’s official website.

“State-sponsored intellectual property theft is a problem for the U.S. defense industry and our military capability,” said Thomas Kennedy, chairman and CEO of Raytheon Company.

“We applaud President Trump for taking the necessary steps to protect our industry and our country,” he said.

We will stand up to any country that unlawfully forces American companies to transfer their valuable technology as a condition of market access. We will combat the counterfeiting and piracy that destroys American jobs.
— President Donald Trump

Trump’s top trade negotiator, Lighthizer, will have a year to finish an investigation that may result in tariffs on Chinese goods, a negotiated settlement, or other outcomes.

“We will stand up to any country that unlawfully forces American companies to transfer their valuable technology as a condition of market access. We will combat the counterfeiting and piracy that destroys American jobs,” Trump said.

“This is just the beginning.”