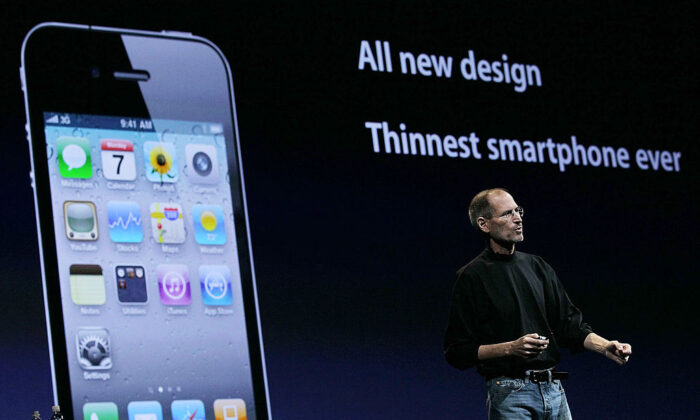 Fifteen years ago, the world was introduced to the iPhone for the very first time by Apple Inc. co-founder Steve Jobs.

Jobs made the announcement that ushered the iPhone into this world on Jan. 9, 2007, and put Apple on the path to becoming the nearly $3 trillion company that it is today.

In 2007, during that Macworld keynote, Jobs said at the outset, “every once in a while a revolutionary product comes along that changes everything.”

Building up the momentum before he actually dropped the iPhone, Jobs described the device as a “widescreen iPod with touch controls,” a “revolutionary mobile phone,” and a “breakthrough internet communicator.”

Showing the audience a photo of the Moto Q, Blackberry, Palm Treo, and Nokia E62 devices, Jobs said, “They all have these keyboards whether you need them or not to be there.”

Jobs highlighted the fact that the buttons and controls on such devices were static and could not change to optimize to different applications.

“What we’re gonna do is get rid of all these buttons and just make a giant screen,” said Jobs while showing the audience their first image of the iPhone.

Rivals Try to Laugh the iPhone Away

Apple’s rivals at the time tried to laugh the device off. Some even flung it off, but in the end, it was Apple that prevailed while they bit the dust.

Steve Ballmer, Microsoft CEO at the time, famously remarked while laughing, “Five hundred dollars! Fully subsidized with a plan! I said that is the most expensive phone in the world.”

Microsoft exited the smartphone business in 2016 after taking a $950 million charge, according to Vox. The company’s smartphone strategy through the years had revolved around Microsoft CE devices, and Windows Phone.
The Redmond, Washington-based tech giant had also taken over Nokia in 2013; by this time Apple was busy preparing to launch iPhone 5S and 5C series.

Also, in 2013, Nokia CEO Stephen Elop thought the iPhone was so “embarrassing,” he actually flung it off when a Finnish talk show interviewer fished one out of his pocket.

Meanwhile, Blackberry co-CEO Jim Balsillie was shown the webcast of the iPhone unveiling by Mike Lazaridis, the vice-chair of the company at the time, according to a Forbes report.

Blackberry founder Lazaridis pointed out to Balsillie that Apple had scored a better deal with mobile carriers as it was allowed to put a full web browser on its smartphone.

As of Jan. 4, Blackberry no longer supports its legacy smartphones, which means it is finally the end of the company in the smartphone business.

The original iPhone was a glass brick, sporting a 3.5 inch—160 pixels per inch—screen. It had a home button in the center.

The phone was 11.6 mm in thickness and had a 2-megapixel camera on the back—and it included a headphone jack.
Fast forward to the iPhone 13—the latest model—and you have a 6.1-inch device that features a 460 pixels per inch display. The device is 7.7 mm thick and sports a 12-megapixel camera. Over the years, the iPhone has lost the headphone jack.

Four years after Jobs passed away in 2011, iPhone sales peaked at 231 million units, according to Statista data. Even so, iPhone has been a sales superstar throughout the years and, in 2021, Apple’s iPhone revenues came in at $38.87 billion or 47 percent of total revenue. The installed base for iPhones as of January 2021 stood at over a billion.

Podcast host Lex Fridman noted the iPhone anniversary on Twitter Sunday to which Tesla Inc. CEO Elon Musk said that it was “mind-blowing that over 80 percent of humans have a smartphone.”