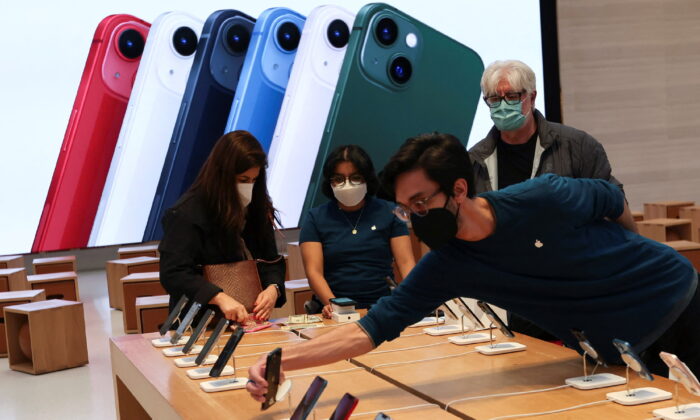 Apple store employees at the Cumberland Mall in Atlanta filed a petition with the National Labor Relations Board (NLRB) on April 20 to hold a union election amid a wave of unionization attempts at retail stores across the country.

If the vote is successful, the workers would be the first Apple retail store to unionize in the United States.

Communications Workers of America (CWA) announced the move in an April 20 news release, stating the union would be representing the Apple employees.

“We welcome the workers who are organizing at Apple and call on the company’s management to reject union busting tactics so that they can vote without interference or intimidation,” said Ed Barlow, President of CWA Local 3204 in Atlanta.

“These workers have been indispensable during the pandemic and the high level of service and support they provide is critical to Apple’s success,” Barlow said. “By having a union voice, they will be able to negotiate lasting improvements to their working conditions.”

The move comes amid a growing labor movement in the United States, with workers at major corporations such as Starbucks Corp. and Amazon.com Inc. forming unions at retail stores and warehouses.

Union activists at Apple have been organizing since last summer, after frustration with management’s decision to require employees to return to the office during the pandemic.

The movement has spread from the office to the company’s retail workers, who have said accused Apple’s management of failing to protect them from the CCP (Chinese Communist Party) virus during the pandemic.

The situation escalated in late 2021, after the Omicron variant spread throughout the country, temporarily shutting down at least 20 Apple stores after retail workers had gotten sick and putting those locations out of action.

After witnessing unionization efforts at companies like Starbucks and Amazon started to plan an organization attempt last fall, many Apple store employees were encouraged by their stance.

CWA has made a concerted push into the tech sector in recent years, representing sales staff, technicians, and media and operations personnel.

About 70 percent of the approximately 100 Apple store employees in Atlanta who are eligible to vote have signed union authorization cards, according to the CWA.

A spokesperson for the National Labor Relations Board confirmed that the agency’s Atlanta office received the union petition on April 20 and that if certain conditions are met, the NLRB will work with the union and the employer to arrange an election.

“We work hard at Apple because we really believe in the products and the company and we want to make sure that every Apple worker is able to afford quality housing and basic living expenses,” said Elli Daniels, a pro-union Apple worker, in the CWA statement.

CWA said that Apple, like other tech companies, has effectively created a multitier employee system that denies retail workers the pay, benefits, and respect that corporate employees earn.

“Apple is a profoundly positive place to work, but we know that the company can better live up to their ideals and so we’re excited to be joining together with our co-workers to bring Apple to the negotiating table and make this an even better place to work,” said Derrick Bowles, a Genius Bar technician at the Apple store, in the CWA press release.

In a statement to The New York Times, an Apple spokesman said the company offered strong employee benefits including health care coverage, tuition reimbursement, and paid family leave, with a minimum pay rate of $20 per hour for retail workers.

The spokesman declined to discuss the union effort with the newspaper.

Workers United, which is an affiliate of the Service Employees International Union, which has been leading the unionization efforts at Starbucks, also desires to organize the thousands of Apple retail workers throughout the United States.

Workers at the Apple store in Grand Central Station in New York City have recently stated that they are trying to organize to join with Workers United.

CWA also has been organizing to unionize workers at Google and has assisted workers in forming a minority union, which enables employees to coordinate actions without holding a union election and seeking certification from the NRLB.

The union succeeded at organizing contract retail workers at a Google Fiber store in Kansas City, and has also sought to represent quality assurance workers at video game company, Activision Blizzard in Wisconsin, which is currently pending a purchase bid from regulators by Microsoft.

However, companies are not required to bargain with minority unions, as they normally would with formal unions.

For the Apple store employees in Atlanta, officials at the NRLB will determine whether there is sufficient interest among workers to hold an election.

The NRLB will then allow the workers and Apple to have an opportunity to negotiate the rules of the vote to organize.

The two sides will then decide which employees are eligible to vote in the unionization decision and whether the vote should occur by mail or in person.