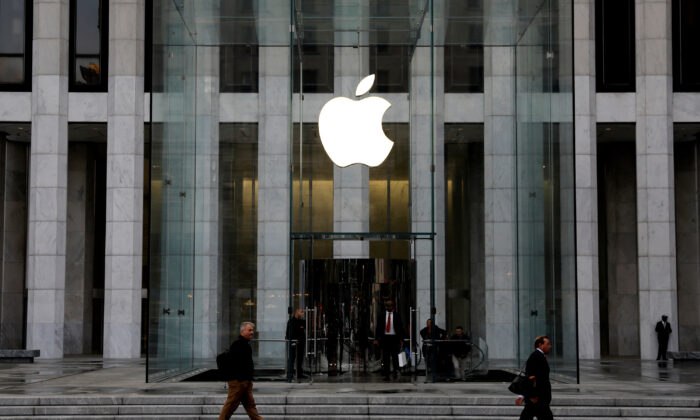 The Apple Inc. logo is seen hanging at the entrance to the Apple store on 5th Avenue in Manhattan, New York, U.S. on Oct. 16, 2019. (Mike Segar/Reuters)
Companies

SAN JOSE, Calif.—Apple Inc. on Dec. 9 told a federal court it has “deep concerns” that two Chinese-born former employees accused of stealing trade secrets from the company will try to flee before their trials if their locations are not monitored.

Xiaolang Zhang and Jizhong Chen should continue to be monitored because they present flight risks, prosecutors argued at a hearing in U.S. District Court for the Northern District of California.

Federal prosecutors allege Zhang worked on Apple’s secretive self-driving car program and took files related to the project, before disclosing that he was going to work for a Chinese competitor. Federal agents arrested Zhang last year at the San Jose, California, airport as he was about to board a flight for China.

Prosecutors claim Chen took more than 2,000 files from Apple that contain “manuals, schematics, diagrams, and photographs of computer screens showing pages in Apple’s secure databases” with intent to share them. Agents arrested him in January at a train station on his way to San Francisco International Airport for a trip to China.

The men were each charged with one count of criminal trade secrets theft and pleaded not guilty. They were released on bail shortly after their arrests and have been monitored since.

Attorney Daniel Olmos, who represents the men, said Dec. 9 that both had family reasons to visit China and had shown no signs of violating their pre-trial conditions so far.

Assistant U.S. Attorney Marissa Harris argued that if either man fled to China, it would be difficult, if not impossible, for federal officials to secure their extradition for a trial. Three Apple employees sat in the courtroom to support prosecutors, including Anthony DeMario, a strategic adviser to Apple’s global security group and veteran of the U.S. Central Intelligence Agency.

“Apple’s intellectual property is at the core of our innovation and growth,” the statement said. “The defendants’ continued participation in these proceedings is necessary to ensure a final determination of the facts, and we have deep concerns the defendants will not see this through if given the opportunity.

Zhang stood listening through an interpreter and was dressed in a white and blue dress shirt, black jeans, and Nike sneakers. Olmos told Davila that GPS monitoring was unnecessary to secure Zhang’s appearance at trial.

“This is not an espionage case,” Olmos said. The government “is not requesting detention, but they are requesting essentially indefinitely location monitoring.”

Harris said Zhang’s wife told federal agents that Zhang, who is a permanent U.S. resident, attempted to flee to Canada when agents searched his home.

During that search, agents found a laptop at the bottom of a laundry hamper that they allege contained trade secrets about Ethernet technology from Zhang’s prior employer, chip supplier Marvell Technology Group Ltd., according to court documents.

Chen, a U.S. citizen who emigrated from China in 1991, listened to the proceedings through an interpreter and wore a dark blue hoodie. He has been under radio frequency monitoring, which is less precise than GPS tracking.

Prosecutors allege that Chen is a flight risk in part because they found documents from several other former employers—including General Electric and Raytheon—at Chen’s second residence in Maryland, where his wife and son live. Prosecutors said in court papers they found a 2011 document from Raytheon that they later determined was classified as “confidential,” the lowest level of sensitivity in the U.S. government system.

“This document contains information relating to Raytheon’s work on the Patriot Missile program and was not (and is not) permitted to be maintained outside of Department of Defense secured locations,” prosecutors wrote.

Olmos, the defense attorney, said it wasn’t a file, but a single paper document “sitting in a box somewhere” in Chen’s home.

Trial dates haven’t been scheduled. A hearing is scheduled for February.