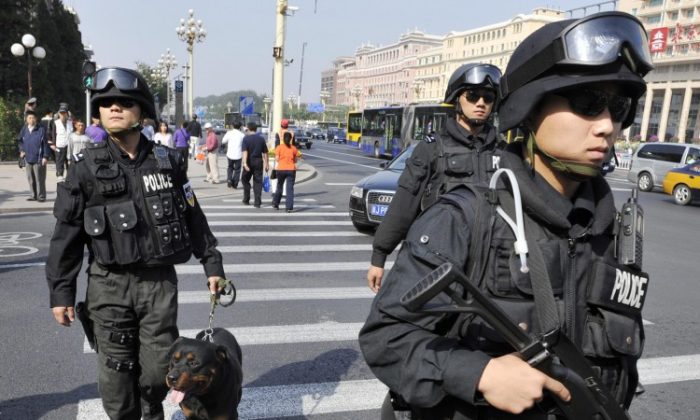 Imagine a committee of half a dozen men that controlled all of America’s state and federal police forces, the FBI, the DEA, the federal and state court systems and district attorneys’ offices, the Department of Justice, and the entire prison system.

Also imagine that it ran hundreds of concentration camps and secret makeshift jails, and could detain anyone, anywhere, for however long it liked, for whatever reason it wished. Imagine, too, that it could torture, interrogate, abuse, or brainwash any of the people it detained.

The committee could do all this because, officially, it had no formal legal existence and operated outside the law. And it stood poised to threaten anyone in power who opposed it.

Such a body exists in China. It is called the Political and Legislative Affairs Committee (PLAC) of the Chinese Communist Party (CCP). Its head is Zhou Yongkang, a 69-year-old political commissar. The committee has no website, no phone number, and no published address. It does not have a press office, and it doesn’t accept Freedom of Information Act requests.

But to Chinese people its existence is very real. “What does it control?” asks Zhong Weiguang, a scholar of totalitarianism now living in Germany. “It’s the core Party leading agency that controls every means of violence and suppression in China.”

The PLAC was inaugurated in 1980 in a move that was supposed to institutionalize what was then the Political and Legislative Leading Small Group, led by Peng Zhen. (Peng was described by sinologist Simon Leys as “one of the most notorious butchers of the regime.”)

The Leading Small Group grew from a Party tradition of making judicial decisions by committee, without the oversight or due process of a judicial system. The supposed institutionalization did not change the basic dynamic of the Party not being subject to the rule of law.

“The administration power of the PLAC is the widest, and its powers the greatest of any guidance committee,” writes Lü Gengsong, a writer and historian of the Chinese communist legal system, in an article in Beijing Spring. “It has become a government that’s not a government, a court that’s not a court—a Chinese-style Gestapo.”

After 1989 the PLAC, with its armed police, stepped into the role filled by the military when needing to suppress mass incidents in China. There are bad optics associated with mobilizing troops against one’s own people, Zhong Weiguang said.

“It became an organization more purely focused on internal violence,” he said, during the 1990s and onward.

But the PLAC really came into its own beginning in 1999, with the massive persecution of Falun Gong. Ethan Gutmann, a writer on the topic, characterizes it as the “largest sustained action by Chinese security forces since the Cultural Revolution.” The PLAC was the institutional backbone of the campaign, and its powers became extraordinary.

The persecution of Falun Gong was led by Jiang Zemin, beginning on July 20, 1999. It was not possible to carry out the campaign, which involved mass arbitrary arrests and detentions, forced labor camps, and the systematic use of torture to extract confessions, through normal judicial or law enforcement means.

The PLAC provided Jiang the tools he needed. He established the 610 Office, or officially “the CCP Central Committee Leading Group for Handling the Falun Gong Issue” and put his lieutenant, Luo Gan in charge.

The 610 Office was not an independent agency, however. At every operational level it was grafted onto the PLAC. In some counties where no 610 Office had been established, the PLAC would oversee the persecution directly.

The means the 610 Office and the PLAC used, and continue to use, were entirely outside the law. Makeshift detention centers are set up in schools, senior citizen homes, abandoned buildings, police guest houses, or hotels, and adherents brought there for torture and brainwashing in order to have them renounce their beliefs. When carried out in a more formal setting, some of these institutions are euphemistically called “legal education centers.”

The persecution also used illegal abductions from people’s homes and workplaces, detentions without warrants, confiscation of property, and confinement without notifying the family.

All this required a vast beefing up of the PLAC.

Law enforcement organs in China also use an increasingly sophisticated and high-tech system of surveillance and monitoring. Hundreds of thousands of cameras are being installed in cities across China with facial recognition technology; identification cards have chips embedded in them, which police can read simply by standing in the same train carriage; phone lines and Internet connections are regularly tapped; complex databases work to bring all the information together so dissidents and others can be quickly caught. The PLAC oversees all this.

Along with the persecution of Falun Gong keeping it busy, societal contradictions have become more severe in the last decade, and the Party has constantly resorted to the armed police—controlled by the PLAC—to suppress them.

By 2008 there were over 120,000 mass incidents per year, according to Murray Scot Tanner, an analyst with the CNA Corporation. This was nearly double the figure four years earlier, and it went up sharply after the economic uncertainty of 2009, Tanner indicated in congressional testimony.

“A main issue is that societal contradictions have been aggravated,” said Lü Gengsong in a telephone interview.

“During the Cultural Revolution, even though it was chaotic, no one opposed the Party. Now there are already voices of opposition in China, the Party feels a sense of crisis, and now their control over society is getting stricter,” Lü said. The PLAC has also been known to step in and prevent media coverage where necessary, Lü said.

As of 2012 the resources included in the “stability maintenance” budget, belonging mostly to the PLAC, were calculated at 700 billion yuan, or US$111 billion, according to official announcements—a 12.3 percent increase from 2011. This is more than the amount that officially goes to the Chinese military.

With the enormous increase in its size, budget, and willingness to use violence, the PLAC has become a threat to top Party leaders, according to experts.

The PLAC controls the Chinese People’s Armed Police Force, which is about 1.5 million strong. “It’s basically a standing army,” said Lü in a telephone interview. “With the armed police handling these domestic issues, military troops aren’t used, so the PLAC’s powers are bigger than the Central Military Commission’s,” he said.

He said that the man who wields the power to mobilize this army—in particular, across provincial lines, which no other armed force in China except the military can do—is on an equal footing power-wise with Hu Jintao.

“Before the PLAC never had such power. It’s because Jiang started the persecution of Falun Gong that its power got so big,” Lü said.

Jiang did not handpick his successor, Hu Jintao, and did not have the loyalty in the military enjoyed by Mao and Deng Xiaoping. “He wanted to control his own armed forces,” Lü said.

And more importantly, he was determined that the persecution of Falun Gong continue. So he installed his own man—Zhou Yongkang—who he knew would do it, according to Xia Yiyang, senior director of Research and Policy (China) at the Human Rights Law Foundation, a Washington-based nonprofit organization.

“One of the most important jobs for the PLAC is to continue the persecution of Falun Gong,” Xia said. “That’s why Jiang installed Zhou Yongkang.”

All this makes the PLAC a sticky problem for the leadership.

It all means that the stakes in the current infighting are high. “Hu Jintao and Wen Jiabao will need to start with the PLAC in their internal struggle. Whoever controls the PLAC controls violence in China,” said Zhong.

These struggles are playing out beyond the sight of the public. “Ordinary people in China probably don’t understand this thing too much,” Lü said. “But the people who have had their houses demolished, then been suppressed, they hate it to the bones.”