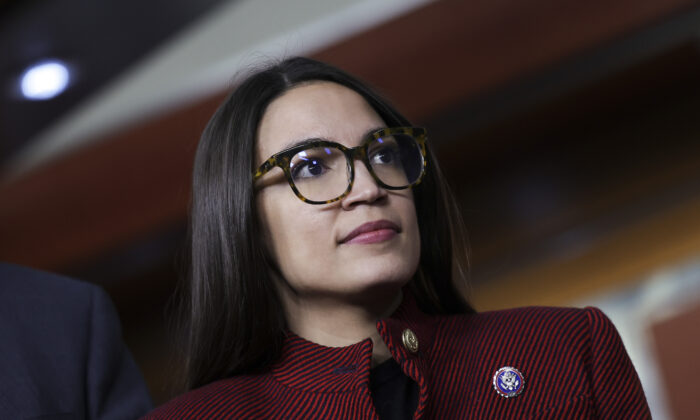 Rep. Alexandria Ocasio-Cortez (N.Y.) said she wants to give up her Tesla, one month after getting into an online spat with Elon Musk on Twitter.

The progressive Democrat revealed her plan after being asked about the billionaire’s recent comments that he was going to vote Republican in the upcoming elections. Ocasio-Cortez purchased her Tesla Model 3 in 2020 when the pandemic began to commute between Washington and her Queens and Bronx districts, but said she’d now go for a union-made electric vehicle.

“At the time, it was the only EV that could get me from New York to Washington on like one, or one-and-a-half charges,” Ocasio-Cortez recently told Bloomberg. “I would love to switch,” she added.

She said the move would be to support a manufacturer that allowed workers to unionize.

The Tesla CEO this year has drawn the ire of progressives after announcing his bid to take over Twitter with a view to restoring free speech on a platform that he described as having “a very far-left bias.” Musk has also vowed to stop what he calls “woke mind virus.”

“He’s a billionaire. I could care less what he thinks,” Ocasio-Cortez told the outlet. The Epoch Times has reached out to her office for comment.

Her remarks came after a Twitter dispute with Musk a month ago, when she took a swipe at the CEO over his plans to buy the social media platform, calling him “some billionaire with an ego problem,” without specifically naming Musk.

“Tired of having to collectively stress about what explosion of hate crimes is happening bc [sic] some billionaire with an ego problem unilaterally controls a massive communication platform and skews it because Tucker Carlson or Peter Thiel took him to dinner and made him feel special,” Ocasio-Cortez wrote in late April.

The New York representative initially reacted to the CEO in a now-deleted message claiming she was referring to Facebook founder Mark Zuckerberg, but later deleted it and reposted a screenshot of the exchange, adding: “Like I said, ego problems.”

Musk’s comments appeared to be in reference to a string of Twitter posts Ocasio-Cortez shared back in December in which she claimed that her Republican detractors were “mad” because they wanted to date her.

She made the comments in response to former Trump advisor Steve Cortes, who shared a photo of Ocasio-Cortez and her partner dining outside, noting that she had gone on vacation to Florida, a place without mask and vaccine mandates, policies that the democratic lawmaker stands against.

1. If Leftists like AOC actually thought mandates and masking worked, they wouldn’t be frolicking in free FL.

2. Her guy is showing his gross pale male feet in public (not at a pool/beach) with hideous sandals.

“If Republicans are mad they can’t date me they can just say that instead of projecting their sexual frustrations onto my boyfriend’s feet,” Ocasio-Cortez wrote in a post.

A May 4 report by research firm Morning Consult showed that 44 percent of EV-interested consumers identify as Democrats, while 23 percent say they are Republicans.

Yet such a divide is much narrower regarding Tesla. As of April, there was only a 2 percentage point gap between Democrats and Republicans for buyers considering a Tesla.