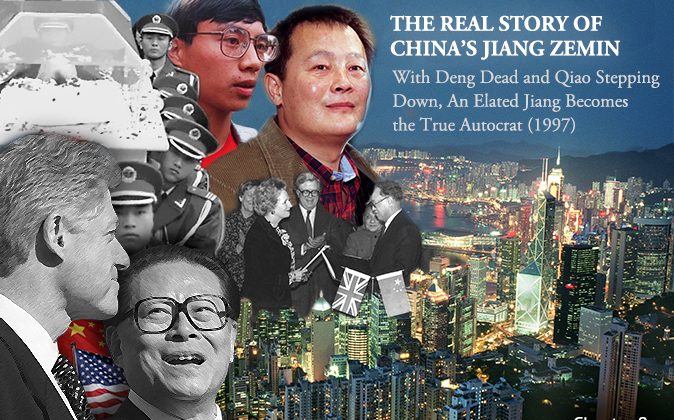 Anything for Power: The Real Story of China’s Jiang Zemin – Chapter 9

With Deng Dead and Qiao Stepping Down, an Elated Jiang Becomes the True Autocrat (1997)
By Epoch Times Staff

Chapter 9: With Deng Dead and Qiao Stepping Down, an Elated Jiang Becomes the True Autocrat (1997)

1997 was a year of great political importance for the top leadership of the Chinese Communist Party (CCP).

Back in December 1993, Deng Xiaoping made an appearance at the Yangpu Bridge of Shanghai, and then, shortly after, he went on television on the eve of the Chinese Lunar New Year. These were Deng’s last public appearances before his passing. A frail Deng not only caused a sharp drop in Hong Kong’s stock market, but also put those close to him in the CCP on edge.

Jiang Zemin, not having the privilege of seeing Deng at will, had to report to Deng through Deng’s office. Jiang felt somewhat relieved upon seeing Deng’s public appearances, believing that his turn might soon come. Jiang and Zeng Qinghong often schemed together as to how they could strengthen their positions. Two things they identified were a need to win over more officials through bribery and to place their own men in key posts. In years following Deng’s appearances, Jiang resorted to various corrupt measures to form his own factions and barter for loyalty with high-ranking officials. Jiang in the process discovered another useful trick of corruption: to get rid of those who don’t swear allegiance by means of an “anti-corruption” campaign. This would prove to be a means Jiang turned to frequently in ensuing years, targeting political opponents.

As long as Deng was alive, however, Jiang would never have real peace of mind. In December 1996, Deng, having been plagued by Parkinson’s disease for years, was hospitalized for his worsening medical condition. Two months passed and Deng was still alive, much to Jiang’s disappointment. Jiang was worried that Deng might recover from his chronic illness and could hardly wait for Deng to die; the wait was excruciating.

Deng was pronounced dead at eight minutes past nine o’clock on the evening of Feb. 19, 1997.

Jiang’s followers wasted no time in issuing a Pronouncement to the entire Party, the entire army, the whole country, and to the peoples of all nationalities—using the name of the CCP’s Central Committee, the Standing Committee of the People’s Congress of China, the State Council, the Political Consultative Committee of China, and the Central Military Commission—that “the Party’s Central Committee with Comrade Jiang Zemin at its core” would definitely carry on the policy of reform and opening up started by Deng Xiaoping.

During the ceremony to pay last respects to Deng’s body, Jiang feigned a sad voice for his eulogy, wishing to conceal his true feelings. He even managed to shed a few tears for the public. But everyone aware of the truth understood what was really on Jiang’s mind. To this day the photo that captures Jiang wiping his tears at the event is the object of ridicule.

At this point in time Yang Shangkun, who had stepped down from power under pressure from Jiang Zemin and Zeng Qinghong, was still alive, though 91. His brother, Yang Baibing, was not fully cut off from the military, despite having been stripped of military power. These men were but one of several reasons Jiang would lie awake at night, sleepless. But hurdles had to be removed one at a time, Jiang knew, and so he prioritized a target for removal: Qiao Shi.

Born in December 1924 in Shanghai, Qiao joined the CCP at the age of 16 and was once an organizer of student movements in Shanghai. From 1945 to 1949 he was the secretary of the CCP’s underground branch at Shanghai Tongji University and chief coordinator of the student committee of Shanghai’s underground CCP, Deputy Secretary of the district committee of Xinshi (Shanghai’s underground CCP), and Secretary of the student committee of District One of northern Shanghai. In those years Jiang was still undecided and hesitant about which road to take. After the CCP came to power, Qiao began from the bottom by becoming a Minister in the CCP’s Liaison Ministry to foreign countries and an alternate Secretary of the CCP’s Secretariat in 1982. Afterwards he held the posts of Director of CCP’s Central Office, Minister of CCP’s Organizational Ministry, Vice Premier of the State Council, Secretary of CCP’s Disciplinary Committee, and President of CCP’s Cadre Institute. From 1993 to 1998 he was chairman of the Standing Committee of the 8th National People’s Congress and a member of CCP’s Political Bureau. With experiences in student movements, industrial systems, liaisons with foreign countries, and responsibilities for intelligence and discipline, Qiao in time became a top decision maker rivaled not even by Li Peng (who was really the son of a martyr) or Party veterans such as Yang Shangkun and Bo Yibo, much less Jiang Zemin—a long time subordinate.

Jiang was not even close to Qiao, be it for reasons of seniority or ability. Not long after coming to Beijing Jiang, having a knack for monitoring others, learned that Qiao was the choice pick of both Deng Xiaoping and Chen Yun—the communist veterans representing both factions within the Party. People within the central government often said that Qiao had earned his positions. Jiang took such remarks to mean he was seen as incompetent, and thus it was that the seeds of Jiang’s resentment toward Qiao were planted. In fact in 1985 Qiao—who was seen as steady, sensitive, and decisive—was endorsed, along with Hu Qili, by communist veterans as one of the top leaders of the next generation. Qiao was among the candidates for Party Secretary even, following the Tiananmen Massacre of 1989, as Deng wished to give him consideration following Deng’s disillusionment with past Secretary Zhao Ziyang.

Jiang knew that he was in an inferior position compared to Qiao. Qiao was backed by the political and legal affairs institutions as well as the Standing Committee of the People’s Congress, which were led respectively by Peng Zhen and Wan Li. What dwarfed Jiang even more was Qiao’s reputation and image. When Qiao was first elected into the CCP’s inner circle he became a favorite of both reformists and conservatives, and was privately named the heir to the communist throne during the CCP’s 13th Congress. During the CCP’s 14th Congress Qiao was elected a member of the CCP’s Politburo with 316 favorable votes—only one vote short of a unanimous count. The one naysayer was none other than a resentful Jiang Zemin.

The people of Beijing expressed their wish that Jiang would step down and Qiao be promoted, saying “the river (Jiang) ebbs while the stone (Shi) emerges”—a saying that was most frustrating for Jiang. Jiang twitched with fear every day before the Yang brothers (Shangkun and Baibing) were forced out of power. For it was little secret—even Jiang himself knew—that Jiang’s ascendance to the highest post in the CCP was more the result of a compromise among CCP elders than patronage from Deng Xiaoping. Deng, though generally in agreement with Jiang’s candidacy, was not without misgivings and had gone back and forth in his mind regarding Jiang several times. Li Xiannian, Jiang’s real patron, endorsed Jiang not so much for his achievements as for having served Li well.

Jiang gazed at the group photo on his table, which was taken on June 21, 1989, after the six new members of the Politburo—Jiang Zemin, Li Peng, Qiao Shi, Song Ping, Li Ruihuan, and Yao Yilin—had just been elected during the 4th Plenary Session of the 13th CCP Congress. Standing in the middle was Yang Shangkun, vice chairman of CCP’s Military Commission. Deng’s intention couldn’t have been any clearer: Yang Shangkun was the real doer of Deng’s wishes while Jiang, like a side dish, mattered little.

Both of the Yang brothers had by that time been forced out of the power game and Deng had since passed away, all of which had the effect of emboldening Jiang. Jiang believed that with Deng gone he was now highest in rank and thus others should rally around him, that he should be the center. But Qiao Shi, who seemed to disregard Jiang, would still speak out, as usual, whenever he saw things that needed to be redressed. This was a vexing matter for Jiang, giving him something of a constant churning feel in his stomach.

Jiang rose to power in Shanghai and, as the Party Secretary of the city, created a “Shanghai faction” which long enjoyed notoriety. After Jiang became the top leader in the Party, government, and military, he began filling vacancies wherever they occurred with his Shanghai faction. Deng raised objections to this on several occasions. Qiao in kind pointed out to the Politburo that officials should be selected from throughout the country. Though Qiao didn’t address anyone by name, those present at the meeting were said to have all looked in Jiang’s direction.

One month after Deng passed away, the German financial newspaper Handelsblatt interviewed Qiao. Zeng Qinghong rushed to present the translation of the interview to Jiang and said, rather mysteriously, “Besides the usual topics related to the legal system and the People’s Congress, Comrade Qiao Shi stressed one other thing to the German reporter.” He deliberately paused a moment, continuing only after he could see Jiang’s anxiety mounting. “He said that his main objective was to counter the Leftist policies.”

When Qiao was interviewed on March 9, 1995, by China’s state-run CCTV, he said that a market economy was dependent upon the legal system, and that the process for economic legislation—being a priority over other forms of legislation—should be completed within one year. Tian Jiyun, Vice Chairman of the People’s Congress, echoed the sentiment by stating People’s Representatives should have the right to choose candidates and that new government policies should be openly explained to the people. Qiao pleaded during the 3rd Plenary of the 8th Session of the People’s Congress that all government workers were servants of the people, rather than masters over them. He stated that it was important to build a clean government starting from improving the (state) system, with particular emphasis on the legal system. Each and every word Qiao said bred in Jiang still deeper resentment.

The major hurdles for Jiang were removed when Deng passed away and the Yang brothers fell from power. Now the thorn in Jiang’s side was Qiao Shi—the man who stood for building a true legal system. Jiang’s next strategic move thus became to force Qiao into retirement at the Party’s 15th Congress.

Jiang again struck a deal with Bo Yibo, another Party veteran. Bo promised to pressure Qiao to retire while Jiang, for his part, apologized to Bo for not having done enough to “take care of” Bo’s son, Bo Xilai.

On April 26, 1997, the person Jiang believed to be Qiao’s major political backer—Peng Zhen—died. Peng was a tough Party elder who even Mao knew not how to handle at times, such as in 1966 at the start of the Cultural Revolution. Jiang felt tremendously relieved over a formidable gerontocrat like Peng being gone.