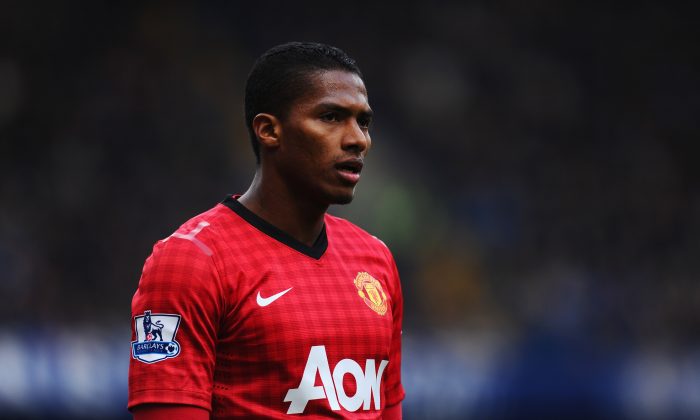 Antonio Valencia of Manchester United looks on during the FA Cup with Budweiser Sixth Round Replay match between Chelsea and Manchester United at Stamford Bridge on April 1, 2013 in London, England. (Photo by Mike Hewitt/Getty Images)
Soccer

Antonio Valencia won’t be leaving Old Trafford, after all.

The 28-year-old Ecuador forward had been linked with a move away to other clubs in recent weeks as part of a big Louis van Gaal clear-out.

Rumors proved to be rumors, however, as Valencia signed a 3-year contract that would see him at Old Trafford till 2018.

Valencia signed for Man United in 2009, and has made 191 appearances and scored 21 goals.

Assistant manager Ryan Giggs told ManUtd.com: “I’m really pleased Antonio has signed a new contract. His contribution to the team since he joined the club in 2009 has been fantastic.”

“Antonio is a very powerful player with great speed and versatility. He is very professional in his approach to training and I am delighted he has committed his future to the club.”

Valencia said: “My time at Manchester United has been like a dream come true. To be the first Ecuadorian player to win the English Premier League was a very proud moment for me and for my country.”

“I am so happy to have signed a new deal and am looking forward to working with Louis van Gaal.”

“There is great team spirit within the club and we are all determined to get back to winning ways,” Valencia concluded.

Ecuador Plays for Benitez and Place in Next Round

There’s also a spot in the final 16 of the World Cup on the line in Wednesday’s match against France.

Benitez died almost a year ago of heart failure, a day after playing for his Qatari club. He was the team’s star striker, and his No. 11 has been retired by the national federation.

“Although we haven’t used him in a strategic way, nor in a way to motivate the team, his image and memory are alive inside of us,” Rueda said Tuesday. “I think the team knows what it’s playing for.”

Ecuador is using No. 11 in this World Cup, with the shirt worn by Felipe Caicedo, only because FIFA requires all numbers between 1 and 23 be used.

Ecuador needs a victory to guarantee a place in the second round. It was knocked out by England in the round of 16 in 2006. It failed to get out of the group stage in 2002, its first World Cup appearance.

France is virtually into the knock-out phase, though it still faces a long-shot mathematical possibility of not making it.

Rueda lauded France as a complete team filled with stars at every position, a team playing as well as any in the tournament.

Ecuador will rely on Pachuca striker Enner Valencia, who has scored three goals in two World Cup matches and solidified his spot up front after Benitez’s death.

It may also get insider information about Rio’s Maracana stadium from defender Frickson Erazo, who plays for local club Flamengo.

“We have the motivation, and there is joy in a match like this knowing it all depends on us if we stay in the tournament,” Rueda said.

Talking with reporters, Rueda — a Colombian — repeated several times the need “to concentrate, be organized and play aggressively.”

“I think it’s a big moment for everyone on the team,” Rueda said. “They (players) know it’s an event that you can get into only every four years. You wait a long time to get in, or maybe you never get in. You have to value and enjoy these moments.”