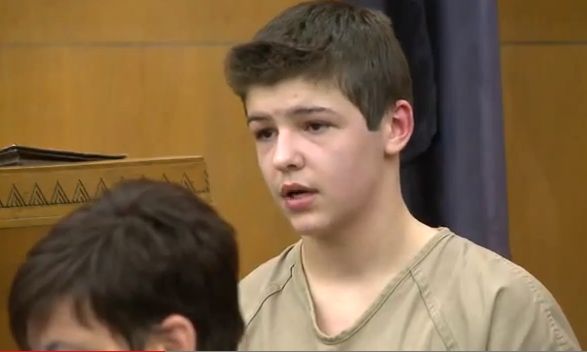 Antonio Barbeau testifies that he and his friend, Nathan Paape, killed Barbeau's great grandmother according to a pre-conceived plan, in a TMJ4 News broadcast. (Screenshot/YouTube)
US

Antonio Barbeau was sentenced Monday to life in prison for killing his 78-year-old great grandmother with a hatchet in Sheboygan, Wis. His family has defended him, hoping the 14-year-old would get a second chance at life. He will not be eligible for parole until he is 50.

He cried when sentenced on Monday. He and his friend, Nathan Paape, allegedly killed Barbara Olson and stole some of her belongings. Paape has pleaded not guilty, but the court must yet decide in his case. Barbeau said when he testified against Paape, shown in a video posted by TMJ 4 News on YouTube, the plan the boys had was to scare Olson to get money and attack “to kill” if necessary.

Prosecutor Joe Dececco said in video posted on the Sheboygan Press website: “Just after they did it, they went out to buy pizza.”

He said a permanent brain injury of Barbeau’s does not excuse the act.

‘I feel bad for the family. I know they love him. But this type of crime cannot go unanswered and be explained away by brain trauma,’ Dececco said, according to the Daily Mail.

Barbeau’s grandmother, the daughter of the victim, Judy Offut, read a statement at the sentencing, according to the Sheboygan Press: “My mom was not a vindictive person. She would want [Antonio] to have a chance to be a better person, to have hope, to have something to work towards.”