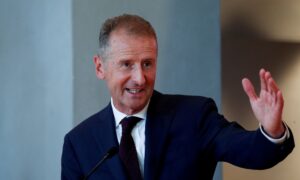 Volkswagen CEO: We Will Keep Up With Tesla but Not Without Cuts
0
Share Now
TelegramFacebookTweetEmailTellMeWeReddit
Copy Link 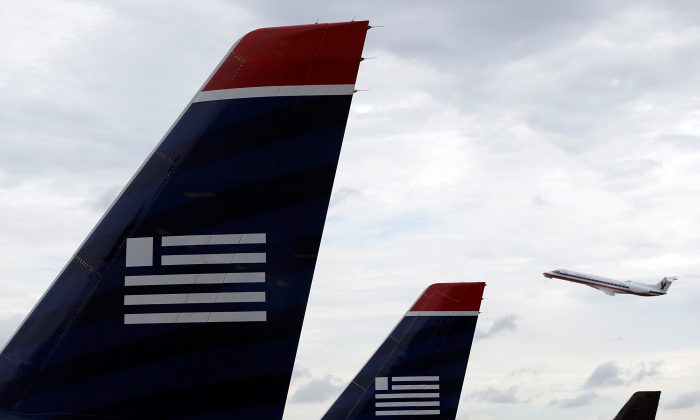 An American Airlines jet takes off behind US Airways jets at Ronald Reagan Washington National Airport in Arlington, Va., Aug. 13, 2013. The Department of Justice filed an antitrust lawsuit Tuesday to block the planned merger of US Airways and American Airlines. (Win McNamee/Getty Images)
Business & Economy

On Tuesday, Aug. 13, the U.S. Department of Justice put a big dent in the proposed merger between AMR Corp. (the parent of bankrupt American Airlines) and US Airways Group Inc. by filing an antitrust lawsuit to block the deal, along with attorneys general from six states.

“The department sued to block this merger because it would eliminate competition between US Airways and American and put consumers at risk of higher prices and reduced service,” said Bill Baer, assistant attorney general in charge of the Department of Justice’s Antitrust Division, in a press release.

“If this merger goes forward, even a small increase in the price of airline tickets, checked bags or flight change fees would result in hundreds of millions of dollars of harm to American consumers,” Baer added.

The combination of these two would have created the world’s biggest airline, surpassing the size and scale of United Continental Holdings.

The antitrust suit was a bit of a shock, given the fact that American had been mired in bankruptcy, and that the two airlines had already secured the European Commission’s approval on Aug. 5 by agreeing to surrender two airport slots—one at London–Heathrow International and another at Philadelphia International Airport.

In addition, the lawsuit stands in contrast to DOJ’s approval of prior mergers such as those between United Airlines and Continental, Delta Airlines and Northwest, and Airtran Airways and Southwest Airlines. Due to high fuel costs, excess capacity, and increasing labor costs, airlines have been on a path of consolidation for years.

Given the past trend of consolidation, the DOJ may have decided that it had reached its tolerance threshold for consolidation within the industry. Airline revenues and profits have gone up, mainly due to lower excess capacity, higher fares, and higher revenues from add-ons such as luggage fees and food purchases.

During its extensive review period since the February merger announcement, the global economy has improved to the point where the DOJ may have felt comfortable that both American and US Airways would survive and prosper as independent airlines.

One option the airlines still have would be to facilitate a carve-out of their operations to satisfy regulators, either by divesting subsidiaries or surrendering airport slots.

Case in point: the American–US Airways combined entity would control the vast majority (68 percent) of landing slots at D.C. Reagan National Airport, the metro airport serving Washington, D.C., which is closest to downtown. The airlines could decide to sell some slots there to try to appease the DOJ.

Unfortunately for the companies, when the DOJ drops a lawsuit on a pending merger, it usually means that the doors for negotiation are mostly shut. If it had decided that some divestitures would have been amenable, it wouldn’t have filed such a lawsuit to challenge the merger in court.

In the last high-profile merger where the DOJ challenged a combination, which was the AT&T and T-Mobile merger, AT&T eventually gave up the bid.

No matter which industry, when consolidation is going on, companies never want to be last to merge.

It looks like a case of going back to the drawing board for American Airlines and US Airways.