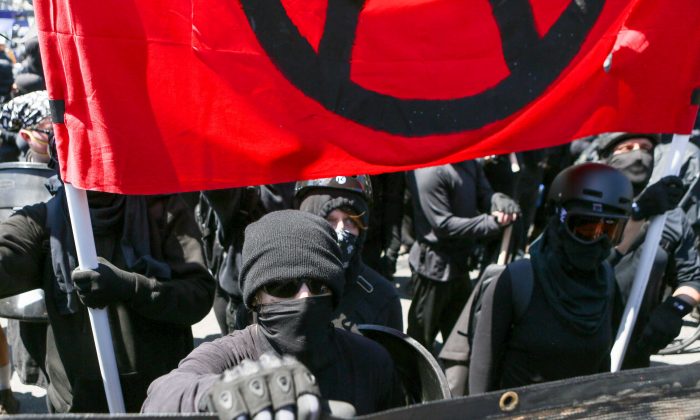 Members of the domestic terrorist organization known as Antifa physically assaulted a man who describes himself as “slightly progressive” for carrying an American flag at a protest in Portland, Oregon, that quickly turned violent.

Paul Welch, 38, joined a “counterprotest” on Aug. 4 in response to a right-wing rally at the Tom McCall Waterfront Park. As he held the flag, a group of black-clad Antifa members approached and told him to dispose of the flag, which they called a “fascist” symbol. But Welch didn’t give in to their demands.

The encounter, which was captured on video, continued with the Antifa members trying to snatch the flag from Welch, who wasn’t letting go. It ended with him being clubbed in the back of the head. The video footage shows the Antifa member who dealt the blow walking away nonchalantly as Welch lay on the ground with his hands covering his bloodied head, while visibly in pain.

No one immediately came to assist Welch before the footage stops.

“My bones turned to Jell-O and I just went down,” Welch told The Oregonian. He believes that he was struck with a metal object on the end of the club. “I remember thinking there was a very good chance that I could be beaten to death.”

It took four staples to close the three-inch gash in his head, and Welch had to spend two days recovering from a concussion before returning to work, according to the newspaper. Hundreds of other Portlanders were also present at the protest.

“I didn’t come as a part of any group,” Welch said, who describes himself as a “slightly progressive leftist.”

He said he felt conflicted in the days after the incident. He has since filed a police report, and Portland police are investigating.

“It strikes me as the worst sort of political theater. It’s kind of like you’re playing into your opponents’ hands when you do that sort of thing. That’s not what I was there for,” Welch told the newspaper.

Earlier this month, on the one-year anniversary of the Charlottesville riots, a number of Antifa members were seen on camera threatening President Donald Trump with violence and even murder. A Secret Service spokesperson previously told The Epoch Times that they were “aware of the videos.”

Trump wrote in a Twitter post marking the anniversary: “We must come together as a nation. I condemn all types of racism and acts of violence. Peace to ALL Americans!”

Antifa is known for increasingly resorting to violence while donning masks or bandanas that serve to obscure their faces. Violent members may soon be held federally liable if Congress approves a bill that provides enhanced penalties against rioters who conceal their identity.

The proposed bill dubbed the Unmasking Antifa Act of 2018 states that anyone “while in disguise” who “injures, oppresses, threatens, or intimidates any person in any State,” would be fined or sent to prison for a maximum of 15 years—or both. It was introduced in August by Rep. Daniel Donovan Jr. (R-N.Y.).

Some have criticized anti-masking bills as being an infringement of constitutional rights. But Donovan spoke out against such critics and told them to look closer at the wording.

“To those predicting a doomsday totalitarian state from my Unmasking Antifa Act: please read the bill,” he wrote on Twitter. “It simply adds a penalty for wearing a mask while infringing on the Constitutional rights of others to assemble and speak freely.”