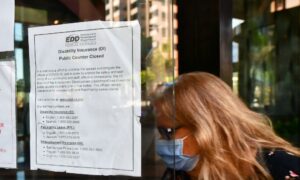 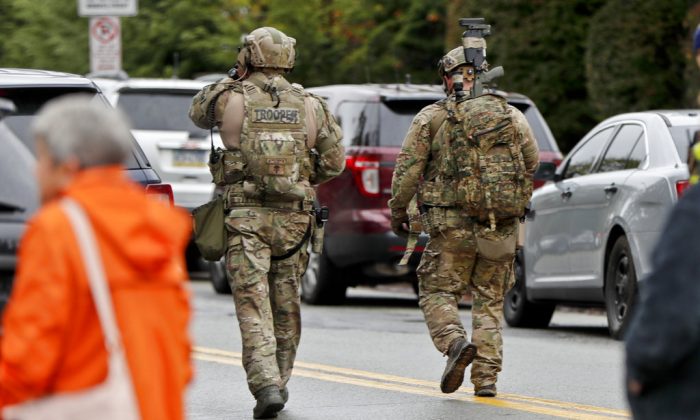 Armed law enforcement officers walk through the street in the Squirrel Hill neighborhood of Pittsburgh where a shooter opened fire during services at the Tree of Life Synagogue on Oct. 27, 2018. (AP/Keith Srakocic)
US News

Anti-Semitic Gunman Kills 11 in Pittsburgh Synagogue, Justice to Be Swift and Severe

PITTSBURGH—A gunman yelling, “All Jews must die,” stormed a Pittsburgh synagogue during Sabbath services on Oct. 27, killing 11 worshippers and wounding six other people including four police officers, before he was arrested.

U.S. attorney for western Pennsylvania Scott Brady announced at a news conference late Oct. 27 that 29 charges have been filed against the suspected shooter, 46-year-old Robert Bowers from Pittsburgh.

“Please know that justice in this case will be swift and it will be severe,” Brady said at a news conference, characterizing the slaughter as a “terrible and unspeakable act of hate.”

“The actions of Robert Bowers represent the worst of humanity. We are dedicating the entire resources of my office to this federal hate crime investigation and prosecution,” Brady said earlier in the day.

PITTSBURGH: Police have identified Robert Bowers, 46, as the gunman accused of opening fire in a synagogue in the Squirrel Hill neighborhood in Pittsburgh Saturday.

10 people are dead and more injured as a result of the attack.

The U.S. Department of Justice Attorney General Jeff Sessions said: “Hatred and violence on the basis of religion can have no place in our society. Every American has the right to attend their house of worship in safety.

“Today 11 innocent people were suddenly and viciously murdered during religious services and several law enforcement officers were shot. These alleged crimes are reprehensible and utterly repugnant to the values of this nation.

“Accordingly, the Department of Justice will file hate crimes and other criminal charges against the defendant, including charges that could lead to the death penalty.”

He added that the events of the week made it even more important for Americans to show gratitude for the hard work of law officers around the country. “I want to thank the FBI, ATF, Pittsburgh police, and especially the heroic officers who were so quick to respond to the shooting, including the multiple officers who were shot,” he said.

“These officers ran to danger to save others, which reflects the highest traditions of policing in this country. There can be no doubt that they saved lives today.

FBI special agent Bob Jones said the Federal Bureau of Investigation, which is leading the probe into the attack, believed Bowers was acting alone, adding: “We have no knowledge that he was known to law enforcement before today.”

Jones said that worshippers “were brutally murdered by a gunman targeting them simply because of their faith,” though he cautioned the shooter’s full motive was not yet known.

Bowers, who had no apparent criminal record, expressed virulently anti-Semitic views on a social media site called Gab, which is popular amongst those who have been banned or censored from other sites like Twitter. The cover photo for his account featured a neo-Nazi symbol, and his recent posts included a photo of a fiery oven like those used in Nazi concentration camps used to cremate Jews during World War II.

Other posts referenced anti-Semitic theories circulating on the internet, rampant in the world of Islamists, that suggest the Holocaust—in which an estimated 6 million Jews perished—was a hoax. He wrote of a Jewish “infestation,” using a slur for Jews.

KDKA television cited police sources as saying Bowers walked into the building and yelled “All Jews must die.”

Bowers had made many anti-Semitic posts online, including one early on Saturday.

Jones said Bowers was armed with an assault rifle and three handguns, and that he was believed to have entered the synagogue, murdered the worshippers, then was leaving when he encountered a uniformed police officer. The pair exchanged gunfire, Jones said, and Bowers reentered the building before a SWAT team arrived. After a shootout, he surrendered.

Bowers was taken to a hospital where he was listed in fair condition with multiple gunshot wounds. Victims taken to area hospitals included a 61-year-old woman, a 70-year-old man, and a 55-year-old officer. No children were killed, authorities said.

Three police officers were shot and one was injured by shrapnel, authorities said. Two of the six people injured were in critical condition.

A social media post by Bowers on Saturday morning said a Jewish refugee organization, the Hebrew Immigrant Aid Society (HIAS), “likes to bring invaders in that kill our people. I can’t sit by and watch my people get slaughtered. Screw your optics, I’m going in.”

The comment was posted on Gab, a Philadelphia, Pennsylvania-based social networking service created as an alternative to Twitter.

The Pittsburgh Tree of Life Synagogue shooter Robert Bowers was a Trump hating Nazi that frequently posted his hatred for Jews and Trump.

Here are some of his last posts from his social media before it was scrubbed from the internet. pic.twitter.com/JNV6BtrxL3

Bowers also slammed on Gab the online community of Qanon, which attracts many Trump supporters.

In a statement, Gab.com confirmed the profile belonged to Bowers and also said it had suspended the account and contacted the FBI about it.

The Tree of Life synagogue in the city’s Squirrel Hill neighborhood, a heavily Jewish area, was holding a Shabbat religious service at the time of the shooting.

Police are normally only present at the synagogue for security on high holidays, Michael Eisenberg, former president of the synagogue, told KDKA.

“On a day like today, the door is open, it’s a religious service, you can walk in and out,” he said.

Around the time, three congregations amounting to about 100 people would have been using the building, Eisenberg said.

Shortly after reports of the shooting emerged, Trump said in a tweet he was watching what he described as a “devastating” situation.

Trump told reporters later that the killings might have been prevented if there had been an armed guard in the building.

“If they had some kind of a protection inside the temple maybe it could have been a much more different situation, they didn’t,” he said when asked if there was any link to U.S. gun laws.

He also called the shooting a wicked act of pure evil, and called on Americans to rise above hate. He said he would visit Pittsburgh, but did not say when.

Jonathan Greenblatt, chief executive officer of the Anti-Defamation League, said it was likely the deadliest attack on the Jewish community in the history of the United States.