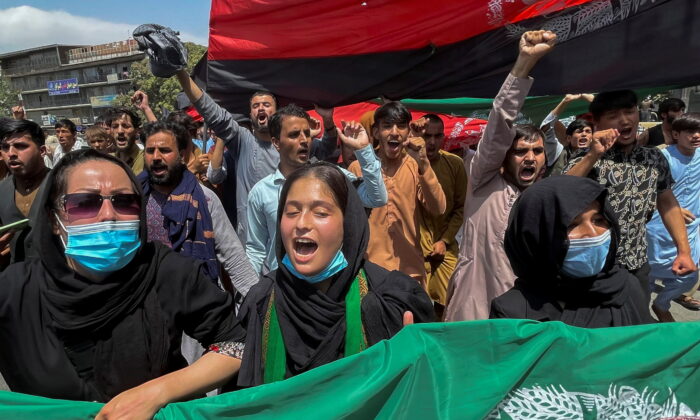 People carry the national flag at a protest held during the Afghan Independence Day in Kabul, Afghanistan, on Aug. 19, 2021. (Stringer/Reuters)
Afghanistan

Forces holding out against the Taliban in northern Afghanistan say they have taken three districts close to the Panjshir valley where remnants of government forces and other militia groups have gathered.

Defense Minister General Bismillah Mohammadi, who has vowed to resist the Taliban, said in a Twitter post that the districts of Deh Saleh, Bano, and Pul-Hesar in the neighboring province of Baghlan to the north of Panjshir had been taken.

It was not immediately clear what forces were involved but the incident adds to scattered indications of opposition to the Taliban that swept to power in a lightning campaign that saw it take all of Afghanistan’s main cities in a week.

Local television station Tolo News quoted a local police commander who said Bano district in Baghlan was under the control of local militia forces and said there had been heavy casualties.

The Taliban has not commented on the incident.

Former Vice President Amrullah Saleh and Ahmad Massoud, son of former anti-Soviet Mujahideen commander Ahmad Shah Massoud, have vowed to resist the Taliban from Panjshir, which repelled both Soviet forces and the Taliban in the 1980s and 1990s.

People close to Massoud say that more than 6,000 fighters, made up of remnants of army and Special Forces units as well as local militia groups, have gathered in the valley. They say they have some helicopters and military vehicles, and have repaired some of the armored vehicles left behind by the Soviets.

There appeared to be no connection between the groups in Panjshir and apparently uncoordinated demonstrations in some eastern cities and the capital Kabul in which protesters raised the red, green, and black colors of the Afghan flag.

But they underscore the problems that may face the Taliban as it begins to consolidate its rapid victory.

The Taliban has not so far tried to enter Panjshir, which is still dotted with the wreckage of Soviet armored vehicles destroyed in the fighting more than 30 years ago.

But Western diplomats and others have expressed skepticism about the ability of the groups gathered there to mount an effective resistance given the lack of outside support and the need to repair and maintain weapons.

The Soviet Union occupied Afghanistan from 1979 to 1989, leaving after 15,000 of its troops were killed and tens of thousands were wounded.