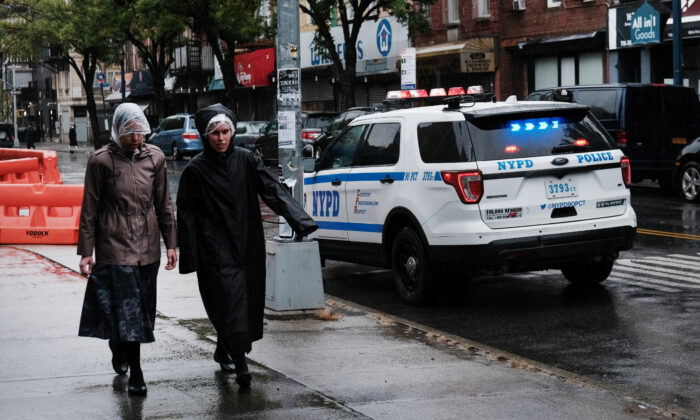 Members of the Jewish Orthodox community walk by a police car patrolling in a Brooklyn neighborhood on the Yom Kippur holiday in New York City on Oct. 9, 2019. (Spencer Platt/Getty Images)
US News

Anti-Semitic Attacks in New York Continue Into the New Year

NEW YORK—Authorities said two women allegedly yelled anti-Semitic slurs to a Hasidic man in Brooklyn on New Year’s Day, with one of them being arrested for assault—the latest in a wave of violent anti-Semitic incidents.

In the past few days alone, there were a number of separate incidents. Jewish leaders were at a loss for words about the increasing string of attacks against their communities over the past few months.

“We have yet to find the cure for this pernicious disease that continues to spread into the hearts and hands of perpetrators” Rabbi Joseph Potasnik, executive vice president at the New York Board of Rabbis, told The Epoch Times on Jan. 2.

Jewish leaders told The Epoch Times recently that the rash of violent anti-Semitic attacks carried out across the New York metropolitan area is unprecedented. Potasnik added that he was “heartened by the response of the non-Jewish communities who publicly stand with us.”

In the latest incident, a 22-year-old man told officers arriving at the scene that he was approached by a 24-year-old woman who “grabbed his phone, threw it at him, and punched him” while a 34-year-old woman “yelled anti-Semitic slurs,” an NYPD spokesperson told The Epoch Times via email.

Authorities said they responded to a 911 call of an assault. The attack took place on Jan. 1 at the corner of Broadway and Gerry Street in the 90th Precinct in Brooklyn. The arrested woman was identified as 24-year-old Jasmine Lucas, who was charged with felony assault and criminal mischief, according to the spokesperson.

Emergency services transported the victim to NYU Langone Hospital–Cobble Hill, where he is in a stable condition. The investigation into the incident remains ongoing by NYPD’s Hate Crime Task Force, the spokesperson said.

Just a day earlier, on New Year’s Eve, a Jewish teen was threatened at knife-point during a robbery inside a bus in Brooklyn. Two assailants allegedly snatched the teen’s earbuds and yarmulke as they were making anti-Semitic remarks, according to The New York Post. A yarmulke is a cap usually worn by Jewish males in Orthodox communities.

According to New York Gov. Andrew Cuomo, there have been at least 13 anti-Semitic incidents in New York since Dec. 8, 2019.

Meanwhile, a new bail law that has been criticized by some Jewish leaders officially went into effect on Jan. 1. New York passed bail reform legislation in April that was estimated to cause at least a “40 percent reduction overall in the state’s pretrial jail population,” according to the Vera Institute of Justice.

Due to the new laws, some of the perpetrators in the recent anti-Semitic attacks have been quickly released without bail. Potasnik has called for a reexamination of the laws to ensure there are no loopholes. He said he doesn’t believe the purpose of the legislation would be to help criminals.

The latest attacks follow an earlier incident in which a man was charged on Dec. 30 with federal hate crimes for stabbing five people who were celebrating Hanukkah at a rabbi’s home north of New York City, in the Orthodox Jewish community of Monsey in Rockland County, New York. Authorities said they found handwritten journals containing anti-Semitic references in the home of the suspect, identified as 37-year-old Grafton Thomas.

Following the latest incident, New York Mayor Bill de Blasio wrote on Twitter, “People MUST be able to walk their own neighborhoods free from fear.” He added that the NYPD has “enhanced patrol presence in Jewish communities.”

In a separate statement, the NYPD said it would continue to deploy police officers to houses of worship within New York communities as 2020 begins.

Some lawmakers, meanwhile, are urging New York’s governor to declare a state of emergency over the spate of anti-Semitic crimes and to deploy the National Guard to patrol Orthodox Jewish neighborhoods.

Four Orthodox Jewish lawmakers signed on Dec. 29, 2019, a joint letter to Cuomo, stating that the anti-Semitic hate crimes have risen to “frighteningly high numbers” in the past few months and that Orthodox Jews have been targeted “with a rash of violence unseen in modern history.”