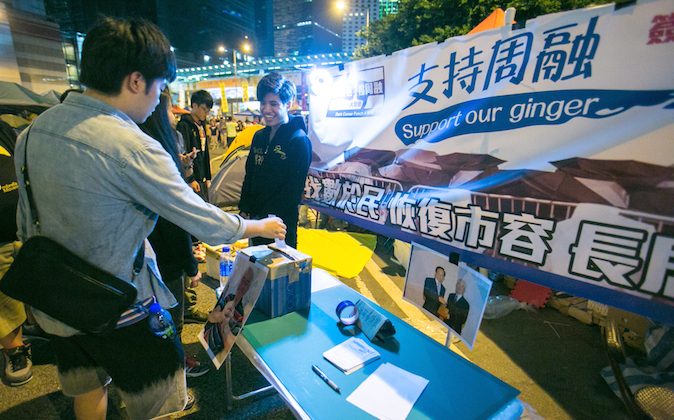 People drop in their support in a mock booth in the Central District designed to look like the Anti-occupy booth that has been around Hong Kong area on Nov. 3, 2014. (Benjamin Chasteen/Epoch Times)
China

At an anti-Occupy rally on Monday, Nov. 3, Chow, the spokesman of the anti-Occupy Central camp, likened the pro-democracy protesters’ occupation of Mong Kok, Admiralty, and Causeway Bay to the Japanese occupation of Hong Kong during World War II.

“In the past, the worst occupation of Hong Kong lasted only three years and eight months,” Chow said.

“Hong Kong has been occupied twice in history: The first by Japan; [Occupy Central] is the second time.”

Chow’s observation found its way on the Web, and he was roundly criticized by netizens.

On Hong Kong In-media’s Facebook page, user Lin Hanzhi wrote: “Misleading analogy; the Japanese were invaders, while today’s pro-democracy protesters are natives of Hong Kong and masters of their own fate.”

Other netizens suggested that Chow was trying to get into Beijing’s good books by playing the “Japan in World War II” card.

The Chinese communist regime often brings up Japan’s invasion of China during the second world war when appropriate to rouse Chinese citizens’ nationalistic feelings and divert attention away from mishandled domestic affairs and problems.

This isn’t the first time that Chow, who is also the convener of the pro-Beijing Alliance for Peace and Democracy civil society group, has been called out for his awkward analogies.

Last week, the 64-year-old former journalist and media personality compared Occupy movement co-founder Benny Tai to the captain of the South Korean ship “Sewol,” which capsized in April this year.

Chow said that Tai was “escaping” from a “sinking ship” without rescuing his student activist “passengers” after Tai and fellow Occupy leader Chan Kin-man had announced that they had to resume their teaching duties at their respective colleges.

South Korea media Yonhap News Agency reported that Chow’s reference to the ferry disaster, which claimed the lives of almost 300 passengers, most of whom were school children, had upset South Koreans living in Hong Kong.

Chow may have made insensitive remarks, but his anti-Occupy Central campaign appears to be very well supported, at least from a cursory glance.

On Monday, Chow announced that the anti-Occupy camp had amassed 1,835,793 signature in person and online from the “silent majority” for a Support Our Police petition that endorses “supporting our police, reclaiming our roads, restoring order, and maintaining the rule of law.”

Lam and Chief Executive Leung Chun-ying, both hugely unpopular with the pro-democracy crowd because of their pro-Beijing stance, signed the petition.

While Leung and Lam’s signatures are undoubtedly legit, the same cannot be said for all the other John Hancocks and their persons.

Netizens have posted pictures of verified Support Our Police forms with questionable identities and contact details.

Chow claims that the pictures of forms on the Web were faked by parties interested in discrediting the petition and defaming the anti-Occupy movement.

The anti-Occupy group has refused to publicly disclose the full list of signatures, however, and no independent scrutineers have been invited to guarantee the campaign’s integrity.

To prove that Chow could have gotten away with anything in his Support Our Police campaign and have a little fun, some Occupy Central supporters started Support Our Ginger on Nov. 1.

The “campaigners” set up a booth at Johnston Road and hung a banner not too dissimilar in design to those found at Support Our Police booths, but with wordings that supports Chow leaving Hong Kong to take up permanent residency in the United Kingdom.

According to the Hong Kong publication Apple Daily, a number of older citizens mistook the prank campaign for Robert Chow’s anti-Occupy campaign, and signed the fake petition.

The “campaigners,” thought to be members of the online discussion forum hkgolden.com, even created a spoof Web form modelled after the anti-Occupy one.

Written in Chinese, the Web form claims that Support Our Ginger has amassed about 18.4 quintillion signatures from more than 555,000 people at the time of writing.

Users can repeatedly click the “submit” button to send multiple signatures. Hitting the “submit” button too frequently sometimes brings up an “ERROR 689” message, the number is a reference to the total number of votes Leung garnered from the 1,200 member election committee in the 2012 elections.

The mock campaign was inspired by the fact that Chow holds a British National (Overseas) passport, and by a remark he made at an earlier anti-Occupy rally.

During the rally, Leung incorrectly announced Chow’s Chinese name as “Zhang Rong” instead of “Zhou Rong.”

When a reporter asked if he was bothered, Chow replied: “It doesn’t matter what you call me.”

As “Jiang Rong” is phonetically similar to “ginger” in Mandarin, the name stuck.

Chow might say the darndest things and run a campaign with dubious credibility, but pro-democracy protesters would do well to pay attention to his announcement after submitting the anti-Occupy petition.

According to Chow, Chief Secretary Carrie Lam said that the Hong Kong government will determine when to move in on the protesters and end the present impasse.

The mainly student-led demonstrators are holding out for genuine universal suffrage for the 2017 Hong Kong chief executive elections, and are asking for present Chief Executive CY Leung to step down.

After a period of indecision following unproductive dialogue with government representatives, the students have recently hinted that they could go over the heads of their pro-Beijing government and directly petition Chinese Premier Li Keqiang.

If the students do go ahead with their plans, the Hong Kong government could use the 1.8 million signatures from the anti-Occupy camp to justify clearing out the students sooner rather than later, and save Beijing and themselves the embarrassment.