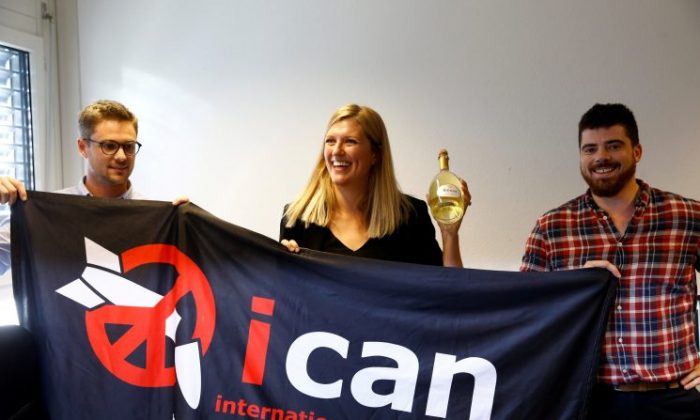 Beatrice Fihn, Executive Director of the International Campaign to Abolish Nuclear Weapons (ICAN) receives a bottle of champagne from her husband Will Fihm Ramsay (R) next to Daniel Hogsta, coordinator, while they celebrate after ICAN won the Nobel Peace Prize 2017, in Geneva, Switzerland on Oct. 6, 2017. (REUTERS/Denis Balibouse)
International

OSLO/GENEVA—The Norwegian Nobel Committee, warning of a rising risk of nuclear war and the spread of weapons to North Korea, awarded the 2017 Nobel Peace Prize on Friday to a little-known campaign group seeking a global ban on nuclear arms.

The award for the International Campaign to Abolish Nuclear Weapons (ICAN) was unexpected, particularly in a year when the architects of the 2015 nuclear deal between international powers and Iran had been seen as favorites for achieving the sort of diplomatic breakthrough that has won the prize in the past.

Still, supporters saw it as a potential breakthrough for a global movement that has fought to ban nuclear arms from the day the first atomic bomb was dropped on the Japanese city of Hiroshima in August 1945.

Asked if she had a message for North Korea’s Kim Jong-Un, who has tested nuclear arms in defiance of global pressure, and President Donald Trump, who has threatened to “totally destroy” North Korea to protect the United States and its allies, she said both leaders need to know that the weapons are illegal.

ICAN describes itself as a coalition of grassroots non-government groups in more than 100 nations. It began in Australia and was officially launched in Vienna in 2007.

“We live in a world where the risk of nuclear weapons being used is greater than it has been for a long time,” said Berit Reiss-Andersen, the leader of the Norwegian Nobel Committee.

“Some states are modernizing their nuclear arsenals, and there is a real danger that more countries will try to procure nuclear weapons, as exemplified by North Korea.”

The award was hailed by anti-nuclear campaigners around the world. Mikiso Iwasa, an 88-year-old Hiroshima survivor, told Reuters the prize would help push the movement forward.

“It is wonderful we have this Nobel Peace-Prize winning movement. All of us need to join forces, think hard and walk forward together to turn this momentum into something even bigger,” he said.

Click here to see a graphics of  Nobel Laureates‘

The prize seeks to bolster the case of disarmament amid nuclear tensions between Washington and Pyongyang, as well as uncertainty over the fate of the 2015 deal between Iran and major powers to limit Tehran’s nuclear program, although the committee made no mention of Iran in its award citation.

The committee raised eyebrows with its decision to award the prize to an international campaign group with a relatively low profile, rather than recognizing the Iran deal, a complex agreement hammered out over years of high-stakes diplomacy.

“Norwegian Nobel Committee has its own ways, but the nuclear agreement with Iran achieved something real and would have deserved a prize,” tweeted Carl Bildt, a former Swedish prime minister who has held top posts as an international diplomat.

Norwegian Nobel Committee has its own ways, but the nuclear agreement with Iran achieved something real and would have deserved a prize.

The Iran accord, which Trump has repeatedly called “the worst deal ever negotiated”, is seen as under particular threat this week. A senior administration official said on Thursday Trump is expected to decertify Iran’s compliance, a step toward potentially unwinding the pact.

The committee may have been reluctant to reward the Iranian government for its role in the nuclear deal because the only Iranian winner so far, 2003 laureate Shrin Ebadi, a lawyer and human rights campaigner, is forced to live in exile.

“I think the committee has thought about the human rights situation in Iran. It would have been difficult to explain the prize even though it has a favorable view of the Iran deal,” Asle Sveen, a historian of the Nobel Peace Prize, told Reuters.

The Norwegian Nobel committee denied that giving the prize to an anti-nuclear group was intended either as a rebuke to Trump, or as a snub to the architects of the Iran nuclear deal.

“The Iran treaty is a positive development, a disarmament development that is positive, but the reason we mentioned North Korea (in our statement) is a reference to the threat that people actually feel,” Reiss-Andersen told Reuters.

“Iran has not voiced recent threats to use nuclear weapons, on the contrary,” she said in an interview.

ICAN has campaigned for a U.N. Treaty on the Prohibition of Nuclear Weapons, which was adopted by 122 nations in July this year.

That agreement is not signed by — and would not apply to — any of the states that already have nuclear arms, which include the five U.N. Security Council permanent members, the United States, Russia, China, Britain and France, as well as India, Pakistan and North Korea. Israel is also widely assumed to have nuclear weapons, although it neither confirms nor denies it.

Major allies of the declared nuclear powers also oppose the new treaty. Nevertheless, campaigners see it as a framework that would make it easier for countries that have nuclear arms to work toward eliminating them.

The United Nations said the award would help bolster efforts to get enough of the countries that signed the new treat to ratify it so that it can come into force. Fifty ratifications are needed.

“I hope this prize will be conducive for the entry into force of this treaty,” U.N. Chief Spokeswoman in Geneva Alessandra Vellucci told a news briefing.