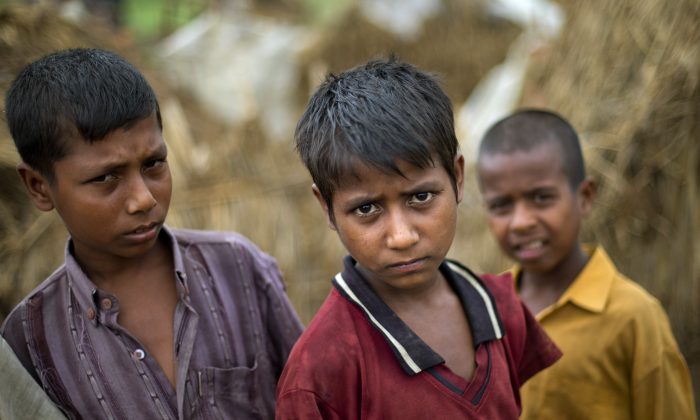 Religious violence between Buddhists and the Muslim ethnic group, the Rohingya, returned again in April to Burma (officially known as Myanmar) in its western state of Rakhine (also called Arakan). The discrimination and violence against the minority Rohingya Muslims is taking on an increasingly uglier tone.

Kira Kay, correspondent for PBS Newshour, reported on June 18 that in April, “Over the three days of violence, at least 50 people, mostly Muslims, were burned alive or hacked to death; 18,000 were displaced; 12 of the town’s 13 mosques were destroyed or badly damaged.”

Once people realized the police would not intervene, they were emboldened to murder Muslims, according to Burmese parliament member Win Htein, who witnessed it and said that the mob was cheering when someone was dragged away and killed.

The spark that ignited the initial violence last year was the news that an ethnic Rakhine Buddhist woman was allegedly raped and killed by three Rohingya men in late May 2012. On June 3, 2012 a group of Rakhine vigilantes attacked and killed 10 Rohingyas on a bus they believed were responsible for the woman’s death, according to Radio Free Asia (RFA).

The recent violence has a new ominous component. Buddhist monks openly speak of the “threat” that Muslims pose and how the Buddhist community needs to put down the Muslim minority.

A virulent anti-Muslim rhetoric is taking hold of the country.

Some prominent Buddhist monks are calling for harsh measures towards Muslims. Burma’s president Thein Sein is supportive of their attitude at least toward the Rohingya Muslims.

Thein Sein stated on a government website that the 800,000 Rohingyas population are not welcome in Burma on June 14, 2012, only a few days after the ethnic clash, according to RFA.

In July Thein Sein suggested that they be put in refugee camps under the control of the United Nations High Commissioner for Refugees (UNHCR) or sent out of the country—a proposal instantly rejected by the UN, according to RFA and Human Rights Watch (HRW).

His name is Wirathu. In the June 18 PBS Newshour broadcast he said, “We must prevent our country from becoming an Islamic state.” He is one of the leaders of the 969 movement, a popular movement whose stickers “969” are visible at many Buddhist businesses. The numbers refer to the Buddha and being a monk, but are really a code for the boycott of Muslims, both economic and social.

In the Newshour segment, Wirathu said, “Muslims never sell their land or property to Buddhists and instead buy off Buddhists’ houses. In this way, they are expanding their control, and are dominating the economy of our major cities.”

He also said “Anywhere Muslims are a majority, there is violence, like what happened in Rakhine state. That is why our idea is to control the Muslim population.”

The government regards the Rohingya as illegal Bengali immigrants from Bangladesh who exploit the porous nearly 200 miles long border to steal scarce land, according to HRW.

During the months following the June 2012 Buddhist-Muslim violence, HRW alleged that Buddhist monks, political-party operatives and government officials conspired to rid Burma of all trace of the Rohingya.

Phil Robertson, deputy Asia director at HRW, accused the Burmese government of engaging “in a campaign of ethnic cleansing against the Rohingya that continues today through the denial of aid and restrictions on movement.”

Dr. Maung Zarni, a Burmese democracy activist, and research fellow at the London School of Economics, makes the case in an interview on March 28 in the Tricycle publication that the state is engaged in genocide but no one wants to call it that.

“After the military proxy party lost by a landslide in the most recent elections, they decided that the time was right to drive out the Rohingya in order to both curry Buddhist majority favor and demonstrate their relevance in reformed Burma. But you know, it’s not possible for any state in this day and age to destroy an entire population of 800,000 to one million. Not after Nazi Germany. Instead, the military has created a situation where there would be communal riots. In doing so, the military state has attempted to do what amounts to outsourcing genocide.”

These sentiments didn’t begin overnight. There were signs that the country was moving in this direction. First there was a law in Rakhine State to restrict Rohingya families to two children. The policy only applies to Rohingya Muslims.

Last month, hundreds of ethnic Arakanese Buddhist protesters in the city of Sittwe, demanded that authorities enforce the discriminatory policy, according to Aruna Kashyap, reporting for HRW.

The policy was first introduced in 2005 in a couple of townships. After the sectarian violence last year, calls for its enforcement were made according to Kashyap.

President Thein Sein, who could order the state to revoke its policy, has been notably silent on the matter, while his Minister of Immigration and Population endorsed the policy.

The pretext given for the policy is that Rohingya women having more children will lead to a life of poverty and poor nutrition for the children, barely concealing their fear that the Rohingyas will alter the demographics of the state. Kashyap says the policy has caused enormous suffering and some deaths of Rohingya women as they cope with the oppressive law which is punishable by fines and imprisonment.

Recently, a proposed law by the nationalist Buddhist monks would apply to the entire country. The new law would bar Muslim men and those from other faiths from marrying Buddhist women.

Wirathu is trying to collect signatures to pressure the parliament to adopt the law, according to RFA. “Muslim men marry Buddhist girls, but Muslim girls are taught not to marry anyone of a different religion,” Wirathu said on PBS Newshour.

Muslims make up four percent of Burma that consists of nearly 90 percent Buddhist. The country has an estimated population of 55 million.

Nobel Peace-Prize winner Aung San Suu Kyi, who has been criticized for her silence on the anti-Muslim violence last year, has spoken out against the proposed law calling it discriminatory against women and a violation of human rights, Burma’s laws, and Buddhism itself.

These discriminatory policies need to be seen in a wider context of state complicity in the ethnic fighting between Arakan Buddhists and the Rohingya Muslims that occurred in June 2012.

“State security forces failed to protect either community, resulting in some 100,000 displaced, and then increasingly targeted Rohingya in killings, beatings, and mass arrests while obstructing humanitarian access to Rohingya areas and to camps of displaced Rohingya around the Arakan State capital, Sittwe,” according to the HRW 2013 World Report.

Amnesty International reported, “Police and army have arbitrarily detained hundreds of men and boys, mostly from Muslim-dominated areas, and subjected many of them to torture and other ill-treatment.” The 2013 Amnesty International report said security forces and other state agents committed “unlawful killings, excessive use of force, arbitrary arrests, torture and other ill-treatment.”

In October, more of the same violence occurred in the townships that did not experience it in June last year, resulting in an unknown number of deaths, razed Muslim villages, and an additional 35,000 displaced persons, according to the HRW report.

In April this year, more flare-ups occurred. According to PBS newshour in one township a Muslim woman bumped into a Buddhist monk in the crowded marketplace, and an argument endued. “Within hours, angry Buddhists were attacking their Muslim neighbors and a mob marched on the small enclave.”

The Muslim village chief and residents hid in bushes, watching their houses burn and their treasured mosque badly damaged. The village chief said in dismay, “We had lived together peacefully. Muslims always participated in the activities of the Buddhist community.”

“People who are committing violence or instigating violence are not being held responsible. This needs to be addressed by the government. Otherwise, the larger reform process could be at risk,” Robertson said on PBS Newshour.