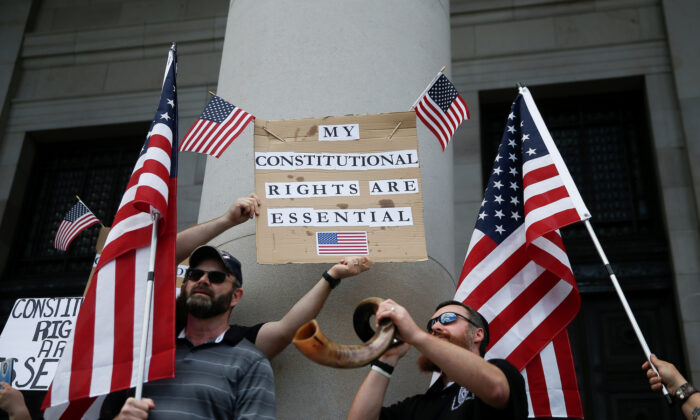 Demonstrators protest an extended stay-at-home order at the Capitol building in Olympia, Wash., on April 19, 2020. (Reuters/Lindsey Wasson)
By Tom Ozimek

Spurred by growing lockdown fatigue, more Americans took to the streets over the weekend as leaders try to ride the line between protecting people from the CCP virus and allowing them the means to still have a roof over their heads and enough to eat.

Rallies in Arizona, Colorado, Montana, and Washington state took place on April 19, demanding that governors lift strict controls on public activity, according to multiple reports. It followed similar protests earlier in half a dozen states, with people demanding a lifting of restrictions that have plunged the once-booming economy into a historic tailspin.

“Even if the virus were 10 times as dangerous as it is, I still wouldn’t stay inside my home. I’d rather take the risk and be a free person,” said protester Ian Freeman, one of a few hundred to rally on April 18 in New Hampshire, which has recorded around 1,400 cases of COVID-19 and 40 deaths.

Worries about the length of lockdowns have a strong basis: the International Monetary Fund expects the global economy to contract 3 percent this year. Tens of millions of workers have lost their jobs already, and millions more fear they’ll be next.

According to The Columbus Dispatch, hundreds of people rallied outside the Ohio Statehouse in Columbus on April 18 to protest a lockdown order that closes nonessential businesses until May 1.

“They were protesting against me yesterday, and that’s just fine,” DeWine said on NBC’s “Meet the Press.” “We’re going to do what we think is right, what I think is right. And that is try to open this economy, but do it very, very carefully so we don’t get a lot of people killed.”

People dressed in hospital scrubs and wearing masks stood on crosswalks in a counterprotest in Denver, Colorado, on April 19, blocking cars with anti-lockdown rallygoers, photos and video posted on Twitter show.

Many protesters calling for an early end to the lockdown in Denver, set to expire on April 30, waved American flags and held signs that read “End the Virus, Not the Economy” and “We need stability to stay healthy,” The Denver Post reported.

“Death is a part of life,” said protester Mary Conley of Jefferson County, The Post reported. “And it’s time to start living again.”

An estimated 2,500 people rallied at the Washington state capitol in Olympia to protest Democratic Governor Jay Inslee’s stay-at-home order, defying a ban on gatherings of 50 or more people.

“Shutting down businesses by picking winners and losers in which there are essential and nonessential are violations of the state and federal constitution,” rally organizer Tyler Miller, 39, an engineer from Bremerton, Washington, told Reuters.

On April 16, the White House issued guidelines for reopening the economy in stages.

Heading into the weekend, the president encouraged people to protest stay-at-home orders in a handful of battleground states led by Democratic governors.

On April 18, Trump defended the demonstrations, saying, “These people love our country. They want to go back to work.”

Protests happened in Republican-led states, too, including at the Texas Capitol and in front of the Indiana governor’s home. Texas Gov. Greg Abbott already said that restrictions will begin easing next week. Indiana Gov. Eric Holcomb, who signed an agreement with six other Midwestern states to coordinate reopening, said he would extend his stay-at-home order until May 1.

Shutdowns have disrupted economic, social, cultural, and religious life and plunged the world into a deep economic slump unseen since the Great Depression.

Several states, including Ohio, Texas, and Florida, have said they aim to reopen parts of their economies, perhaps by May 1 or even sooner.

With the arc of infection being different in every nation and across U.S. states, proposals have differed for coping with the CCP virus, commonly known as novel coronavirus, which has been attributed to nearly 50,000 deaths in the United States, according to Johns Hopkins tally.

“There’s death, and there’s problems in staying at home, too. It’s not just, ‘Isn’t it wonderful to stay at home,'” Trump said.

“They’re suffering. This country wasn’t built on that principle; it was built on an exact opposite principle.”