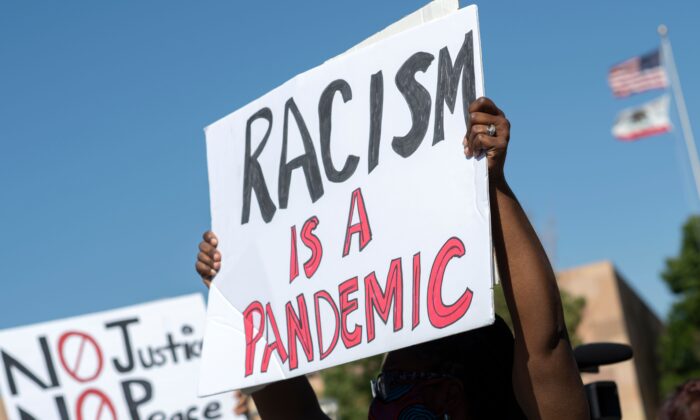 A woman holds up a placard during a protest in Victorville, Calif., on June 16, 2020. (Valerie Macon/AFP via Getty Images)
Southern California

Anti-Defamation League Changes Its Definition of Racism After Backlash

The Anti-Defamation League (ADL) has again changed its definition of racism amidst public backlash, after the organization’s CEO, Jonathan Greenblatt, criticized then accepted the apology of television personality Whoopi Goldberg for making racially insensitive and inaccurate remarks on “The View.”

On Feb. 2, the organization Californians for Equal Rights Foundation (CFER) and 20 other civil rights groups sent a letter to the ADL raising alarm over its definition of racism.

In July 2020, the ADL redefined racism as the “marginalization and/or oppression of people of color based on a socially constructed racial hierarchy that privileges white people.”

In a press release, CFER called that definition of racism “absurd and narrow-minded” with roots in critical race theory.

“The far left is waging a culture war by redefining and engineering fundamental concepts that we use daily, including racism, along political and ideological lines,” said Frank Xu, president of CFER. “As a society, we must be on high alert and push back.”

The ADL’s redefinition of racism came into the media spotlight when Goldberg said on the television show “The View” on Jan. 31 that the Holocaust was “not about race.” Greenblatt quickly condemned her remarks on Twitter and appeared in a segment on the show the next day.

ABC has suspended Goldberg from the show for two weeks.

In the Feb. 2 letter, CFER and the co-signing partner groups claim ADL’s attempt to redefine what constitutes racism is a “deeply offensive, illiberal, and un-American ploy to ascribe guilt and innocence to individuals on the basis of their race.”

The groups represented in the letter suggested ADL adopt a definition similar to its former definition of racism: “the belief that a particular race is superior or inferior to another, that a person’s social and moral traits are predetermined by his or her inborn biological characteristics.”

The same day the letter was issued, ADL revised the definition of racism on its website to a new “interim” definition.

“Racism (interim definition): Racism occurs when individuals or institutions show more favorable evaluation or treatment of an individual or group based on race or ethnicity. (Prof. Robert Livingston, The Conversation).”

ADL did not respond to specific inquiries about the change, but instead deferred to an article written by the organization’s CEO, Jonathan Greenblatt: “Getting it Right in Defining Racism.”

The article cites the interim definition as what Professor Robert Livingston of the Center for Public Leadership at Harvard University calls his “simple definition.”

ADL, Greenblatt wrote, is trying to adapt to the times, “but we certainly don’t always get it right.”

“As a case study, take ADL’s definition of racism. A few years ago, ADL updated our definition to reflect that racism in the United States manifests in broader and systemic ways and to explicitly acknowledge the targeting of people of color—among many others—by the white supremacist extremism we have tracked for decades. While this is true, this new frame narrowed the meaning in other ways. And, by being so narrow, the resulting definition was incomplete, rendering it ineffective and therefore unacceptable. It’s true, it’s just not the whole truth.”

Greenblatt explained that the redefinition alienated many people, including many in the Jewish community.

“In all honesty, as I re-read it this past week, it struck me that it didn’t even speak to my own family’s experience with the racism they experienced as Jews from the Middle East,” Greenblatt wrote.

Greenblatt claims in the article that ADL doesn’t get involved in partisanship or politics but remains focused on what is right and wrong. The group plans to conduct a review on how it develops all its definitions and open the discussion to the public.

“This moment offers an opportunity to experiment and learn. And so, we are going to open ourselves to comments on our new definition of racism from the public,” he wrote. “We are going to invite feedback at adl.org/comments, a new page we have developed specifically to take ideas in a productive fashion and move beyond the mindless trolling on social media.”

Wenyuan Wu, CFER’s executive director, told The Epoch Times on Feb. 3, that ADL has veered to the “far left” in its political ideology since the summer of 2020.

Redefining racism was a “political move,” that nobody has challenged until recently, she said.

“It’s an encouraging development that the ADL, as a reputable and respected civil rights organization, has changed its course on redefining racism by seeking public input. We wholeheartedly welcome open-minded and sincere dialogues with its leadership on how we can collectively advance core civil rights issues such as equality,” she said.

“At least they have not completely lost their mind on this,” Wu added.