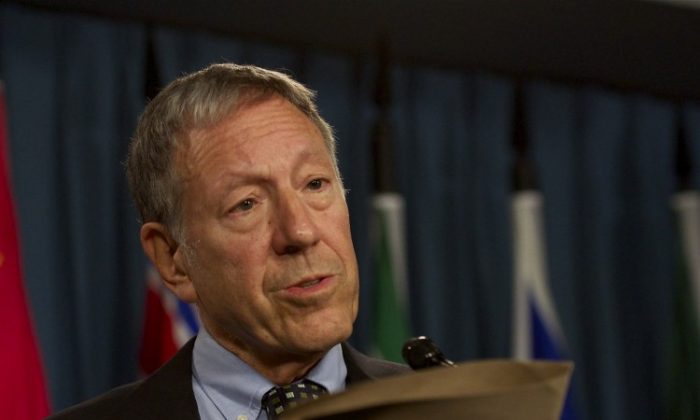 PARLIAMENT HILL, Ottawa—Acts of defiance that made them heroes in the fight against apartheid now make some of South Africa’s most celebrated figures unwelcome in Canada.

It’s a problem Liberal justice and human rights critic Irwin Cotler railed against on Monday after a recent trip to South Africa where he heard firsthand about the “insult and hurt” that comes from an effective visitor visa ban on members of the apartheid-era African National Congress (ANC).

The ban seems to be related to criminal convictions handed down by the apartheid South African government for membership in the ANC, which was outlawed for decades in South Africa.

Cotler tabled a motion in the House of Commons yesterday declaring ANC members should not be inadmissible to Canada solely on the basis of their membership.

Citizenship and Immigration Canada (CIC) did not respond to a request for details of the issue but in an earlier email a spokesperson for the department said CIC agrees with Cotler that it is a problem.

“He will be happy to know that we are already reviewing this issue and will take steps to address it. In fact, last October the CBSA (Canada Border Services Agency) issued new guidelines to take into consideration organizations that have undergone a ‘fundamental’ change,” Candice Malcolm, press secretary for Immigration Minister Jason Kenney, wrote in an email.

The long-standing policy has sparked embarrassing news coverage since 1996 when two heroes of the anti-apartheid movement were denied visas despite being MPs in the ANC government at the time.

Ahmed Kathrada and Barbara Hogan both spent long years in prison because of their anti-apartheid convictions.

Cotler noted that at the time, immigration officials argued it was improper for the department to look beyond the fact of their convictions and weigh in on whether they were truly criminals.

More recently, in 2005, Lionel Davis made headlines after repeated attempts to come to Canada for a speaking tour sponsored by Toronto businesses and the Windsor-area Catholic school board fell through because of his inability to get a visa.

Davis is another hero of the anti-apartheid movement and spent seven years jailed on Robben Island, which housed Nelson Mandela and Kathrada for 18 years.

Cotler said during his trip to South Africa last week that he had heard that the visa ban is still causing “hurt and pain.”

South Africa’s deputy foreign minister Ebrahim Ismail Ebrahim told Cotler he would not even apply for a visa to Canada because of the “humiliating and insulting” process of having to prove he was not a criminal, Cotler said.

While there is no blanket ban on visas for members of the ANC, the party Nelson Mandela later led to post-apartheid victory in South Africa’s first open election, membership would seem to invalidate would-be tourist visa applications based on current questions.

The form asks: “Are you, or have you ever been a member or associated with any political party, or other group or organization which has engaged in or advocated violence as a means to achieving a political or religious objective, or which has been associated with criminal activity at any time?”

The form includes questions about the organization and activities involved, but visa rejections would indicate visa officer discretion is not enough to get around criminal charges stemming from ANC activities.

“This issue was actually a big issue when Nelson Mandela tried to travel to Canada for the first time,” said Anesh Maistry, the acting High Commissioner for South Africa in Ottawa.

“It is not something that just relates to rank and file members; it relates to a lot of leaders that were senior leadership in the African National Congress.”

Maistry could not speak to the exact nature of the policy but notes that the criminal records that seem to trigger the visa ban emanate out of apartheid legislation enacted to outlaw legitimate groups working against apartheid.

He said that legislation is part of a system that has been declared a crime against humanity and it should not discredit members of the ANC or other groups that were banned.

“During apartheid people were jailed and people have criminal sentences because of being members of these organizations,” he said.

“Just being a member of the African National Congress, which is the ruling party of democratic South Africa, during apartheid was illegal.”

While the ANC and its armed wing the Umkhonto weSizwe (MK) were part of a legitimate liberation movement, the South African Truth and Reconciliation Commission’s final report found that both it and South Africa’s apartheid system were responsible for gross human rights violations.

Maistry said all avenues used to fight against the apartheid regime must be seen within the broader context of the struggle.

“It was a legitimate struggle against an illegitimate regime,” he said.

Maistry said the South African government understood Cotler’s motion, but would pursue the visa issue bilaterally with the Canadian government.

The government has not confirmed how it will respond to Cotler’s motion.