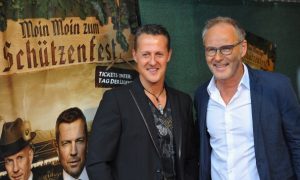 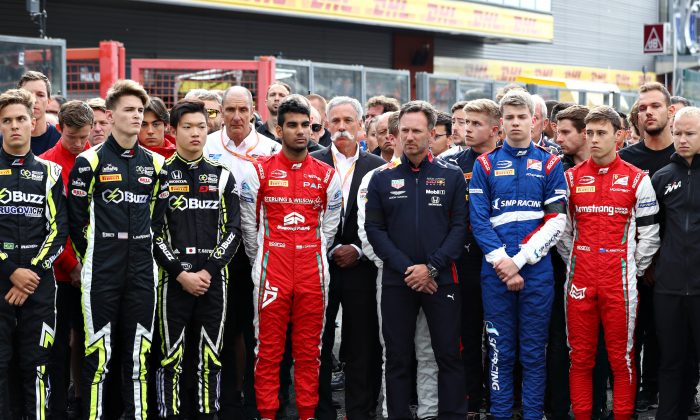 Members of the Formula 1, Formula 2, and Formula 3 communities observe a minute of silence in tribute to Anthoine Hubert at Circuit de Spa-Francorchamps in Spa, Belgium, on Sept. 1, 2019. (Mark Thompson/Getty Images)
Motorsports

The Formula 1 racing organization has announced a minute’s silence ahead of Sunday’s Grand Prix in Belgium in memory of Anthoine Hubert, the Formula 2 driver who was killed in an accident.

Hubert lost his life in Saturday’s Formula 2 race at Spa, after being involved in a crash on the second lap of the race.

“The 22-year-old Frenchman, who was part of Renault’s driver academy, was involved in a multi-car incident at Turn 4,” said the Formula 1 official page. “He was taken to the medical center, but sadly succumbed to his injuries.”

American Juan Manuel Correa suffered fractures to both of his legs and a minor spinal injury, Sky News reported. Members of his team were cited in the report as saying Correa had undergone surgery and remains in stable condition.

A one-minute silence was held on the grid before Sunday morning’s F3 race, with the Formula 3 Twitter account posting a photo of drivers and crew members standing in honor of the deceased driver.

The victor of race two of the Formula 3 competition “dedicates his victory to Anthoine Hubert,” the account noted in a follow-up post.

He dedicates his victory to Anthoine Hubert#BelgianGP 🇧🇪 #F3 pic.twitter.com/NpSHX1EFQp

A second period of silence will be observed ahead of the start of the F1 Grand Prix, which begins at 2:10 p.m. local time, Sky News reported.

According to an announcement by Formula 2, Sunday morning’s F2 sprint race was canceled out of respect for the deceased driver, which the organization called “a fantastic driver who had a bright future ahead of him.”

Anthoine was a fantastic driver who had a bright future ahead of him.

He was kind to everyone, always smiling, and his positive attitude was infectious.

Out of respect, Sunday’s F2 Sprint Race has been cancelled. pic.twitter.com/mvQzUxuGWi

Numerous tributes to Hubert have poured in from across the motor sport world.

F1 published a tribute on Twitter, saying: “Just like it was for Anthoine, racing is our passion and our dream. It defines us.”

“So today we race for Anthoine,” adding, “and today, and always, we honor him.”

We do so with the heaviest of hearts, and we carry the memory of Anthoine throughout.

Just like it was for Anthoine, racing is our passion and our dream. It defines us.

So today we race for Anthoine.

And today, and always, we honour him. pic.twitter.com/46MO41C6aT

Formula 2 said: “Rest in peace Anthoine. You will forever be in our hearts.”

You will forever be in our hearts pic.twitter.com/rtOBGZDJlQ

A joint statement from Formula 1, Formula 2, and Formula 3, honored Hubert.

“Formula 1, Formula 2, and Formula 3 are deeply saddened by the passing of Anthoine Hubert following a horrific crash at today’s Feature Race at Spa-Francorchamps, involving three other drivers.

“We would like to extend our deepest condolences to Anthoine’s family, loved ones, and friends. We would also like to send our heartfelt sympathies to the entire Arden team.

“Anthoine has been part of our paddock since 2017. He was a fantastic driver who had a bright future ahead of him. He became GP3 Series Champion last year, and this season, he won twice in Formula 2, taking victories in Monaco, and at his home race in Le Castellet.

“He was kind to everyone, always smiling, and his positive attitude was infectious.

“He will be dearly missed.”

“If a single one of you watching and enjoying this sport think for a second what we do is safe you’re hugely mistaken,” said F1 world champion Lewis Hamilton on Instagram, Sky News reported.

“All these drivers put their life on the line when they hit the track and people need to appreciate that in a serious way because it is not appreciated enough. Not from the fans nor some of the people actually working in the sport.

“Anthoine is a hero as far as I’m concerned, for taking the risk he did to chase his dreams. I’m so sad that this has happened. Let’s lift him up and remember him. Rest in peace brother.”

Formula 1 driver Max Verstappen took to Twitter to share his condolences, writing: “Absolutely shocked by the tragic accident of Anthoine Hubert. Terrible. My thoughts are with him and his family, friends, team and loved ones.”

Absolutely shocked by the tragic accident of Anthoine Hubert. Terrible. My thoughts are with him and his family, friends, team and loved ones. #F2 pic.twitter.com/NzLTSfqmqT

According to a statement released by the Federation Internationale de l’Automobile (FIA), “a serious incident involving cars #12, #19, and #20 occurred at 17:07 on 08/31/19 as a part of the FIA Formula 2 Sprint Race at Spa-Francorchamps, round 17 of the season.”

“The FIA regrets to inform that the driver of car #19, Anthoine Hubert (FRA), succumbed to his injuries, and passed away at 18:35,” it stated. “The driver of car #20 Giuliano Alesi (FRA) was checked and declared fit at the medical center.”

In 2013, he joined the French F4 Championship and finished the season with 11 wins. After that, he competed in various races and championships.

In 2019, he joined BWT Arden, a multiple formula racing team.