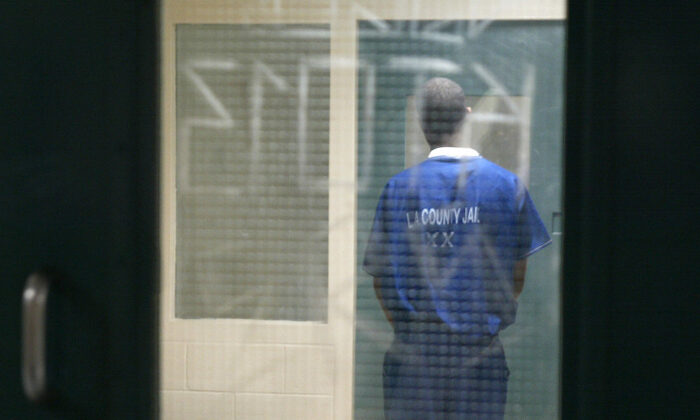 A prisoner waits in a holding cell in the Twin Towers Correction Facility during a media tour of the facility and of the adjacent Los Angeles Men's Central Jail in downtown Los Angeles on May 19, 2004. (ROBYN BECK/AFP via Getty Images)
Southern California

When a few Antelope Valley residents learned that a sexually violent predator was set to be released into their community, they called their friend Vladimir Gomez.

Gomez, a 25-year resident of the area, previously worked to mobilize the community to petition against the placement of “Pillowcase Rapist” Christopher Hubbart into their neighborhood in 2014.

“They called me and said, ‘we have a new fight,’” Gomez told The Epoch Times.

“We’re so tired of being a ‘dumping ground’ to release ex-convicts,” Gomez said.

Like with the community’s previous fight, however, the courts would ultimately rule in favor of placing the sexually violent ex-convict in Antelope Valley.

Grassmier was convicted on three counts of rape by force and two other counts of sexual assault in the 1970s and 1980s; his last offense was committed in 1988, according to the Los Angeles District Attorney’s office. Grassmier will wear an ankle monitor and will be under 24/7 surveillance upon initial release.

Bianco previously rejected a bid for Grassmier to be released in La Crescenta-Montrose, after residents held several protests in June. The judge cited the area’s spotty cell service, which may pose difficulties in tracking Grassmier’s ankle monitor bracelet.

Some Antelope Valley residents gathered in protest at the Hollywood Courthouse on Sept. 1, where the judge agreed to place Grassmier in Littlerock at the request of the California Department of State Hospitals.

Misty Vivirito, a sexual assault survivor and resident of Antelope Valley, wrote a letter to the DA’s office that was read in court by a prosecutor. Vivirito said she was worried for the safety of her four daughters as well as other children in the neighborhood.

Gomez, who is also president of the Wilsona Elementary School District board, expressed concern for the children in the area.

“Grassmier will live just a quarter-mile from [Littlerock] High School, and close by [Daisy Gibson Elementary School],” Gomez said. “There are children that will walk by his house on their way to school.”

For years, the Antelope Valley area, which includes Palmdale, Lancaster, and Littlerock, has been a go-to release spot for ex-convicts with a history of sexual violence. The “Pillowcase Rapist’s” release in 2014 lasted for 18 months until he violated parole guidelines. According to the Megan’s Law website, there are currently 206 sex offenders in Palmdale, and 415 in Lancaster.

This makes it hard for the rural community to grow, according to Gomez.

“We’re a growing community,” Gomez said. “In the past 25 years I’ve been here, I’ve seen a lot of people come up from LA and the San Fernando Valley, because housing is cheaper up here. But that’s not going to happen anymore with all these sexually violent predators coming to our communities.”

“Placing Mr. Grassmier at the house … further traumatizes this already marginalized community,” Barger wrote in a letter urging Bianco to reconsider Grassmier’s placement. “This placement, which is located within two miles of four schools, will make families feel unsafe and unsettled in their own homes and neighborhoods. I agree with the concerned residents who want assurance that Mr. Grassmier will abide by the conditions of his release and appreciate the judge’s ruling that calls for 24/7 security at Mr. Grassmier’s residence.”

Gomez said that even though he was disappointed by the judge’s ruling, he urged people to continue to fight.

“To [get] to the judges, we have to get involved with elected officials in our communities, to voice our opinions, and to vote in local elections,” Gomez said. “The safety of the community should be a number one priority.”

The Epoch Times reached out to Judge James Bianco and he declined to comment.