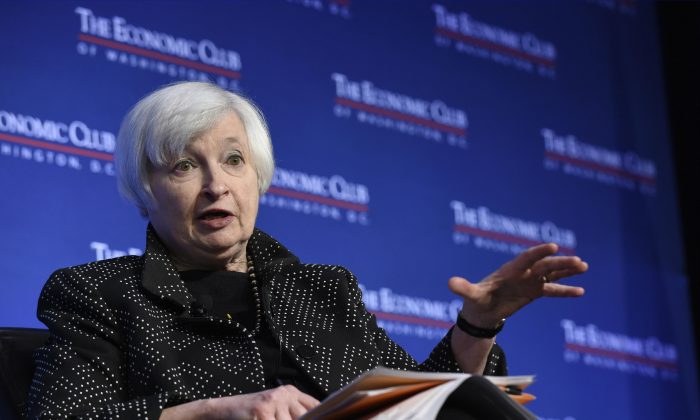 Federal Reserve Chair Janet Yellen speaks at the Economics Club of Washington in Washington, Wednesday, Dec. 2, 2015. Yellen indicated that the U.S. economy is on track for an interest rate hike this month, but the Fed will need to review incoming data before making a final decision. (AP Photo/Susan Walsh)
Business & Economy

Another Month of Solid US Hiring Clears Way for Fed Hike

WASHINGTON—If the Federal Reserve needed any final evidence that the economy is ready for higher interest rates, it got it on Friday.

A solid November job gain of 211,000 showed that despite weak overseas growth and struggling U.S. factories, the U.S. economy appears healthy enough to withstand a Fed hike from record-low rates later this month.

The unemployment rate remained at a low 5 percent in November for a second straight month, the government said Friday. More Americans started looking for jobs, and nearly all found them.

Average hourly pay rose, though modestly, and the government revised up its estimate of job growth for September and October. Employers have now added a robust average 213,000 jobs a month over the past six months.

The healthy jobs figures indicate that consumer spending is helping the economy surmount some lingering challenges. They include a strong dollar, which has made exports pricier overseas and squeezed U.S. manufacturers, and sinking oil prices, which have led drilling companies to slash orders for steel pipes and other equipment.

Even so, Americans are spending more on restaurant meals and on big-ticket items like cars and homes.

The U.S. economy “is strong enough to withstand an initial hike in interest rates from what were seen as emergency record-low levels,” said Chris Williamson, chief economist at Markit. “A December rate hike now looks to be in the bag.”

This week, Fed Chair Janet Yellen said the economy appeared to be improving enough to justify a rate hike as long as no major shocks undermined growth before the Fed meets Dec. 15-16. The Fed has kept its key short-term rate at a record low near zero for seven years.

A Fed rate hike typically lifts interest rates for mortgages, auto loans and other borrowing, though those increases might not occur immediately.

For the Fed, conditions seem nearly ideal for a period of small and only gradual rate increases in coming months: Job growth has been solid, and wages have begun to rise but not so much as to cause concern about future high inflation.

Since the recession ended, average hourly pay has grown at only about two-thirds of the pace typical of a healthy economy.

In November, average hourly wages rose 2.3 percent from 12 months earlier to $25.25. That is below October’s annual increase, which had been the strongest in six years. It’s still far below the roughly 3.5 percent pace typical of a strong economy.

Still, many economists say they’re optimistic that Americans’ pay will keep rising. Companies are advertising near-record levels of available jobs. And layoffs are at very low levels. Both figures point to strong demand for workers.

“Companies are holding onto people pretty tightly, and at some point that’s going to manifest itself in higher wages,” said Michael Dolega, senior economist at TD Bank. “Their workers are going to get poached. They are going to have sweeten the deal at some point.”

Sarah Raminhos landed a new accounting job last month at a firm in Chevy Chase, Maryland, with a salary about 5 percent higher than her old one. She saw more opportunities than she did during a previous job search two years earlier and even felt confident enough to turn down offers.

Dolega said wage gains are being held back by steep job cuts in mining, a category that consists mostly of oil and gas drilling and has shed 14 percent of its jobs in the past year. Government data show that drilling firms were handing out big raises as recently as last year to attract workers, but average pay in the industry is now declining.

The sizable gain in construction jobs last month, even as the Fed is preparing to raise rates, suggests that few expect higher borrowing costs to derail home building or sales.

And sales of existing homes have increased nearly 4 percent from a year ago, while new home purchases have jumped almost 16 percent.

A healthier housing sector has benefited Genpact, a New York City-based company that provides mortgage processing services to companies. CEO Tiger Tyagarajan says Genpact has added about 400 people to its 4,000 person U.S. workforce this year, many of them in highly skilled areas such as software programming and management consulting.

“The U.S. economy seems to be steady, and that’s good because that means we have to hire more,” Tyagarajan said.

Still, Genpact hasn’t felt compelled to boost pay. Instead it’s stepped up training and recruiting and is seeking to make it easier for employees with families to work part time.