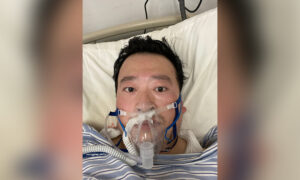 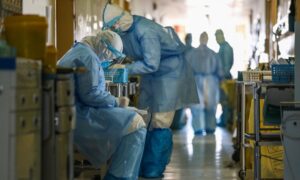 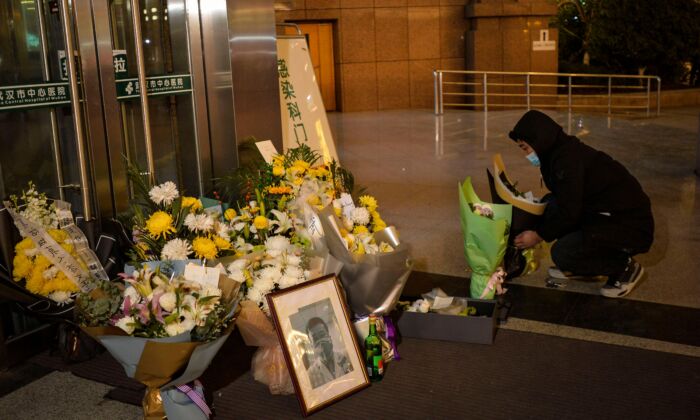 A man is placing flowers beside a photo of the late ophthalmologist Li Wenliang outside the Wuhan Central Hospital in Wuhan, China on Feb. 7, 2020. (STR/AFP via Getty Images)
CCP Virus

Another Chinese Doctor, Supervisor of Wuhan Whistleblower, Dies From Coronavirus

Another doctor in Wuhan, the epicenter of the new coronavirus outbreak in China, has died from the deadly virus.

Mei Zhongming was the supervisor of Li Wenliang, known as the “whistleblower doctor” who was among a group of medical professionals who published information about the outbreak ahead of official announcements and was punished for it. Li’s death elicited an outpouring of grief and anger at Chinese officials for suppressing freedom of speech.

Mei, the deputy director of the ophthalmology department at the Wuhan Central Hospital, died on March 3 at the Jinyintan Hospital, also in Wuhan, at the age of 57. As with Li, Mei was infected with the virus while treating patients, the hospital said. He is the latest doctor to have died of COVID-19 in the virus-stricken city.

Mei was born and raised in Wuhan. After graduating from the Zhongshan School of Medicine at Sun Yat-sen University in Guangdong Province in 1986, Mei joined the ophthalmology department at the Wuhan Central Hospital, according to the hospital’s statement.

Li first posted on social media about a “SARS-like” outbreak in December 2019 but was later reprimanded by local police for “rumor-mongering.” Li later contracted the virus from a patient he was treating, and died from the COVID-19 disease in February, according to state media. He was 34.

Jiang Xueqing, a surgeon specializing in thyroid and breast procedures at the Wuhan Central Hospital, died on March 1 from COVID-19. He also contracted it while treating patients at the hospital. He was 55.

Jiang, Mei, Li, and their colleagues were reassigned to work at the hospital’s respiratory department to assist with the large number of COVID-19 patients.

Hu Weifeng, a urology surgeon at the Wuhan Central Hospital, was also infected with the virus and was reportedly in critical condition. On Feb. 16, many netizens shared a social media post by Hu’s wife, who said he had received emergency treatment just before midnight on Feb. 15 and needed plasma donations from people with Type O blood.

The hospital hasn’t confirmed whether he was cured or died; there have been no updates about Hu’s condition since then. In addition, the social media post by Hu’s wife was deleted.

That same day, Huang Wenjun, deputy chief physician of the respiratory department at the Xiaogan Central Hospital in Hubei Province, died at age 42. Du Xiansheng, a doctor from Hainan province, died from COVID-19 at age 55.