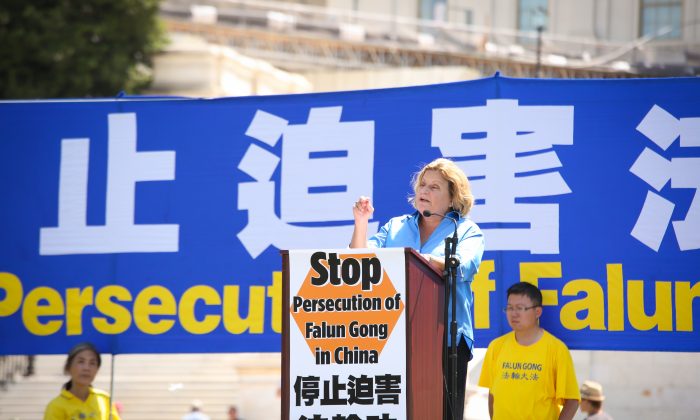 Rep. Ileana Ros-Lehtinen (R-FL) speaks at a rally at the Capitol in Washington on July 14, 2016. (Benjamin Chasteen/Epoch Times)
China

WASHINGTON—The annual rally of Falun Gong practitioners and supporters on the West Lawn on July 14 was upbeat and optimistic this year. Falun Gong has had some victories in the past year that the Congress members in their speeches and letters of support often alluded to. The leaders of human rights and faith organizations were also hopeful.

No one was more jubilant speaking at the rally than Congresswoman Ileana Ros-Lehtinen (R-Fla.), who had introduced House Resolution 343 that unanimously passed the House on June 13. She was the first speaker and set the tone for the rest of the rally.

“We have sent the message, loud and clear, to the Chinese Communist Party, that we demand an immediate end to the persecution of the Falun Gong, that we demand that all jailed Falun Gong practitioners and other prisoners of conscience be released, and that we call on China to immediately stop its inhumane and unethical practice of organ harvesting,” Ros-Lehtinen said.

Ros-Lehtinen said that she and her colleagues in the House know that Falun Gong practitioners are being tortured and killed with impunity, and that the regime spreads false information to smear Falun Gong.

As she pointed to the U.S. Capitol building standing behind her, she said:

“So last month, this hallowed body, this body that stands for freedom, for justice, and respect for human rights, the U.S. House of Representatives recognized that these atrocities are, indeed, taking place.”

So last month, this hallowed body … the U.S. House of Representatives recognized that these atrocities are, indeed, taking place.
— Congresswoman Ileana Ros-Lehtinen (R-Fla.)

Now in its 17th year, this annual gathering began when the Chinese Communist Party launched a campaign to “eradicate” Falun Gong, a peaceful meditation practice, on July 20, 1999. The rally at the U.S. Capitol has become one of the longest-running annual demonstrations at the nation’s capital. Following the rally, the protesters marched to the Lincoln Memorial, and held a candlelight vigil there in the evening.

Alan Adler, executive director of Friends of Falun Gong, hosted the rally as he has done for several years. He noted that H.Res.343 meant that “the truth about organ harvesting, based on facts that investigators have documented for the past 10 years,” has now been “officially acknowledged.” Adler added: “In the wake of this important legislation, many large news outlets have reported on organ harvesting for the first time.”

He said that because of the enhanced media coverage, many Americans are learning the truth about the China communist regime’s killing of potentially hundreds of thousands of Chinese citizens, pillaging their organs for profit. This media exposure will aid in bringing in an end of the atrocity, he said.

President of Freedom House Mark Lagon said he saw a bright side in recent developments regarding the persecution of Falun Gong. There is evidence that local-level security officials are choosing to protect practitioners, not arrest them, or, if practitioners are detained, they are quickly released.

Lagon noted a remarkable incident. “In June 2015, following large-scale phone-calling, letter writing, and petition-signing campaign, a judge in Shaanxi Province issued the first known not guilty verdict for a Falun Gong practitioner who was subsequently released and allowed to return to his home in Beijing.”

However, though the above cracks in the Chinese communist persecution of Falun Gong are a welcome sign, Lagon said they are only the silver lining of a very real persecution that persists.

In addition to the House resolution, Falun Gong activists had another victory of sorts, a sobering one however. A recent investigative, data-driven, 679-page report, titled, Bloody Harvest / The Slaughter: An Update, by David Kilgour, Ethan Gutmann, and David Matas, has provided still more evidence of organ harvesting in China.

It concludes that since 2000, the number of China’s organ transplants is between 60,000 and 100,000 per year, mostly from Falun Gong practitioners. The authors argue that the annual number of 10,000 transplants, which China has been reporting to the media, has in fact concealed mass atrocities.

Since 2000, between 960,000 and 1.5 million organ transplants have occurred in a country that until recently didn’t have a voluntary organ program, the report found. The authors conclude that majority of the organs came from Falun Gong practitioners, with some Uyghurs Muslims, Tibetans, and house Christians—all prisoners of conscience.

While declining to give an estimate of the number killed, the report authors indicate that in the majority of cases, one transplant equaled one death.

‘Forced onto an operating table’

David Cleveland, a senior lawyer for Catholic Charities of Washington, contrasted China’s transplant industry to transplantation in the United States.  For instance, in the U.S., about 3,000 people have been waiting for more than 5 years for a liver. In contrast, in China, “the problem is the lack of doctors, not the lack of organs!” A patient schedules an appointment for transplant surgery, and less than 24 hours before the surgery, a prisoner is killed and the organ taken, he said.

[In contrast with the U.S., in China] the problem is the lack of doctors, not the lack of organs!
— David Cleveland, senior lawyer, Catholic Charities of Washington

Dr. Wang Zhiyuan, president of the World Organization to Investigate the Persecution of Falun Gong (WOIPFG), spoke about the explosive growth of China’s organ transplantation industry since 1999, using data published by the government. From 1991-98, a total of 78 liver transplant surgeries were performed in Chinese hospitals. During the eight years from 1999—when the Falun Gong persecution took off with hundreds of thousands of practitioners detained—to 2006, there were 14,085 liver transplant surgeries.

Wang expressed great frustration and sorrow for the “carnage in China.” In translation from the Chinese, he said, “While I am reading this speech, probably many good and innocent Falun Gong practitioners are being forced onto an operating table for organ harvesting. Many more practitioners are still imprisoned in secret jails, facing the unspeakable terror of organ harvesting at any moment.”

While I am reading this speech, probably many good and innocent Falun Gong practitioners are being forced onto an operating table for organ harvesting.
— Wang Zhiyuan, president, WOIPFG

A Business Too Lucrative to Stop

Congressman Trent Franks (R-Ariz.) wrote in a letter of support addressed to the protesters, “Thousands have been subjected to a most barbaric practice, and have lost their lives so their vital organs could be extracted and sold for organ transplantation—a lucrative business in China.”

Ethan Gutmann says that the forced organ harvesting that he investigated is not history, but is ongoing and in high gear. It’s the hospitals’ “bread and butter,” Gutmann says.

Congressman Dana Rohrabacher (R-Calif.) said more than once that Falun Gong is on the “frontline against evil.” One of the worst evil forces in existence are Chinese Communists who rule mainland China, he said. He thanked Falun Gong practitioners for informing the American people and the world about the manipulation of information that the regime does. He expressed great indignation for some Americans, who should cherish freedom and human rights, but “go there and are only making deals with a regime that represses its people, which murders people–the Falun Gong–and has made a profit in trading and the body parts of people they have murdered. This evil has to be stopped,” he said.

Suzanne Scholte, president of Defense Forum Foundation, echoed Rohrabacher’s view of Falun Gong practitioners as on the frontlines of the fight to end persecution and human rights violations in China. “This fight is not of their-own choosing but simply because of the [Chinese Communist Party]’s unprovoked attack against them,” she said.

This fight is not of their-own choosing but simply because of the [Chinese Communist Party]’s unprovoked attack against [Falun Gong].
— Suzanne Scholte, president, Defense Forum Foundation

Rep. Suzanne Bonamici (D-Ore.) wrote in a letter of support about forced harvesting of organs in China. “This deeply abhorrent practice has no place in a civil society.”

U.S. Senator Marco Rubio noted the China investigative work of the Congressional-Executive Commission on China (CECC), which he serves as the co-chair. “Ultimately, China can never be a responsible stakeholder as long as it persists in subjecting its own people to abuse, torture and repression and continues to deny them basic human rights,” he said.