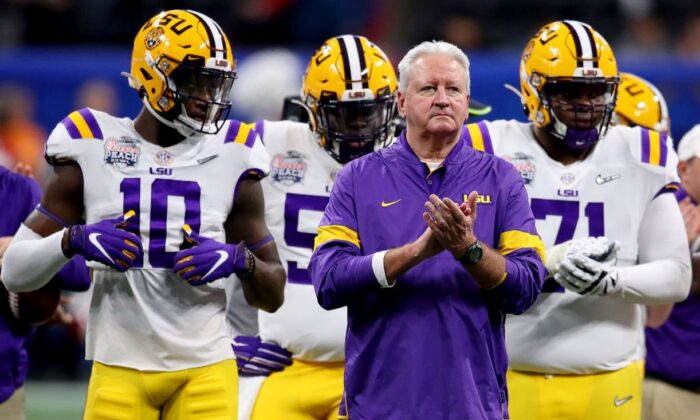 Offensive coordinator Steve Ensminger of the LSU Tigers looks on prior to the Chick-fil-A Peach Bowl between the LSU Tigers and the Oklahoma Sooners at Mercedes-Benz Stadium in Atlanta, Georgia, on Dec. 28, 2019. (Gregory Shamus/Getty Images)
Entertainment News

McCord, who is a sports reporter, died along with four others in a plane crash while they were traveling to the Peach Bowl for the College Football Playoff semifinal.

Matt Barrie, who has been on ESPN’s “SportsCenter” since March 2013, received a bevy of critical comments on social media after making this statement: “Certainly our thoughts and prayers with coach and his family, as he gets to do his job and try to put away the distraction of losing his daughter-in-law just hours before kickoff,” it was reported.

Viewers took umbrage with the “distraction” remark after website Awful Announcing posted a clip of it on Twitter.

“I know your job is to talk about the game but in moments like these is when your humanity should kick in,” wrote Annie Apple, the mother of New Orleans Saints cornerback Eli Apple. “Death of his daughter in law is not ‘a distraction..’. Just say ‘Ensminger will be coaching with a heavy heart today..’ Producers, help dude fix this.”

College football writer Alex Kirshner wrote on the social media website: “Let’s not refer to an LSU assistant coach losing one of his children in a plane crash as a ‘distraction’ from the football game at hand … The football game is the distraction, not the death of a child.”

Added another, hockey writer Adam Getz: “No idea who this dude on the ESPN pregame show is but I think he just said ‘Put away the distraction of losing his daughter-in-law …’ I mean … what the…”

WSDU issued a statement following the plane crash and confirmed McCord worked there.

“Words cannot express the tremendous amount of sorrow our entire staff holds for Carley and her family,” said WDSU News Director Akili Franklin. “She was an extraordinary woman and a talented reporter. We offer our deepest condolences to her family and friends.”

McCord was a New Orleans-based freelance reporter who worked for WDSU-TV. As reported by The Washington Post, Ensminger didn’t want players to know about his loss during the game.

The two-engine Piper Cheyenne was heading to the LSU game in Atlanta for a playoff game. McCord’s husband, Steven Ensminger Jr., confirmed her death to The Associated Press.

A GoFundMe page was set up for Danielle Truxillo Britt, who is suffering from severe burns after the crash. The page says her vehicle flipped and caught on fire during the plane crash.

The cause of the crash has not been identified, but the National Transportation Safety Board announced via Twitter that one of its top officials, Vice Chairman Bruce Landsberg, and eight others will investigate.