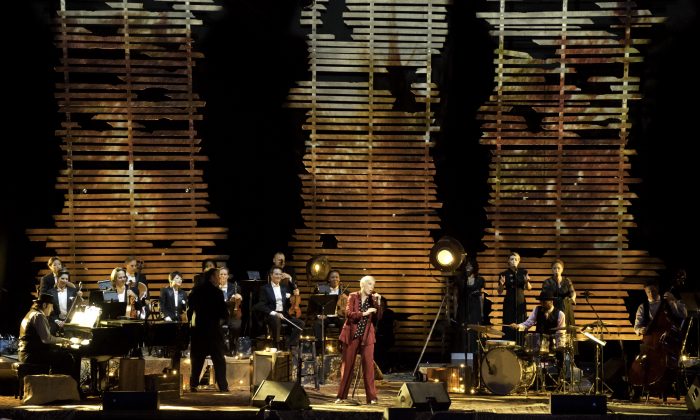 Recently, Annie Lennox, OBE took performers like Beyonce Knowles to task, making the obvious but inevitably controversial point: “twerking is not feminism . . . It’s not liberating. It’s not empowering. It’s a sexual thing that you’re doing on a stage.” It probably needed to be said. It is therefore not so shocking Ms. Lennox was a little conflicted when her cover of Screamin’ Jay Hawkins’ “I Put a Spell on You” was requested for the Fifty Shades of Grey soundtrack, but she had to admit it fit the film like a glove, so to speak.

Now millions of creepy fans are familiar with the unclassifiable R&B classic. On paper, it also stands out as the ringer in “Nostalgia,” Lennox’s new CD of American Songbook standards, but once again it just fits neatly into the program. Lennox performs nearly the entire album live at the Orpheum Theatre in a concert recorded for Great Performances, which premieres on PBS April 3.

Lennox must be hip, because she obviously has an affinity for Hoagey Carmichael. The set opening “Memphis in June” is okay, but it is followed by a stirring “Georgia on My Mind,” given a Ray Charles-ish arrangement with strings. Wisely, she does not keep new fans waiting for “I Put a Spell on You.” Lennox is particularly attuned to the song’s eerie subtext, which is why it works so well over the film’s opening credits. (You now have an excuse to watch the first three and a half minutes when the film comes on cable.)

For jazz fans, the arrangement of “I Cover the Waterfront” provides some of the tastiest moments, including an evocative solo trumpet introduction. It is a great tune from the strangely under-recognized Johnny Green, still probably best known for “Body and Soul.”

Lennox also pays tribute Billie Holiday, which is about as jazz as you can get. However, she also demonstrates the pitfalls of covering “Strange Fruit.” You have to give her credit for trying, but it is a profoundly unforgiving song that only really seems to work with the sparsest of arrangements.

Indeed, the string section is far too prominent here and having a back-up vocalist echoing Lennox is bizarrely counter-productive. You really have to lay it all out there in nakedly revealing way to do “Strange Fruit” justice, which is why only a select handful, such as Holiday and Nina Simone, have been able to successfully integrate it into their regular sets.

Happily, “God Bless the Child” is a different matter entirely. Lennox performs it in a gospel bag, giving the lyrics a surprisingly sassy interpretation. It is a bit of a departure from tradition, but it sounds great, in a swinging kind of way. “September in the Rain” also has a pleasant jazz-with-strings vibe, featuring some nice piano seasoning. Lennox also nails the aching romanticism of “The Nearness of You,” another Carmichael tune that never goes out of style.

Fittingly, Lennox saves the best (and her third wardrobe change) for the final “Nostalgia” song, the Ellington standard, “Mood Indigo,” which features a slightly reggae-ish vibe, a second lining brass combo, and some old school New Orleans plunger mute work. Lennox really embraces the bluesiness of the lyrics and brings it all home.

Of course, you do not survive in show business as long as Lennox has without giving fans what they want, so as an encore she accompanies herself on piano for solo renditions of “Here Comes the Rain” and “Why.” Both are shrewd selections well suited to the stripped down performance (she probably should have approached “Strange Fruit” in a similar manner, but it is hard to blame her for seeking a bit of cover for that song).

It is cool to see PBS nationally following the lead of NJTV and WNET Thirteen with their American Songbook programming. Lennox’s concert is one of the best yet. She has a good feeling for the tunes and she is still a very charismatic performer. Recommended for fans of Lennox and the American Songbook, Nostalgia Live airs on most PBS outlets as part of the current season of Great Performances.