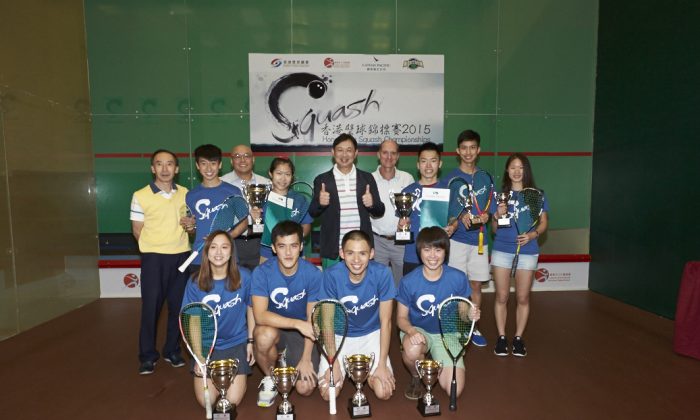 Women
Annie Au, the Hong Kong No.1 player with a current world ranking of 10 was expected to take the women’s championship although it was thought that No.2 seed Joey Chan with a world ranking of 27 would push her all the way. However, Chan tweeked a thigh muscle in her quarter final match against Lee Ka Yi and although winning that match in 3-games she tried not to aggravate the injury further in the semi-final against Liu Tsz Ling. Liu sensed that Chan was not moving as freely as usual and after winning an epic second game 17-15, Liu played a lot of boosts from the back of the court in the 3rd game which Chan was not able to reach. Liu won the 3rd game 11-5 to win the match taking her to the Final.

Men
No.1 seed Max Lee with a world ranking of 16 sailed through the tournament reaching the final after two initial walkover rounds and wins over Chui Shung Hei, Yuen Tsun Hei, Wong Chi Him – all in fairly easy order.

No.2 seed Leo Au (world ranked 37) reached the final by beating Wong King Yeung Anthony, Chan Wui Ki Lincoln, Lo Cheuk Hin Chris and Yip Tsz Fung. Au’s semi-final match against 3/4 seed Yip Tsz Fung looked like it might be an upset as Yip, looking strong and fit, took the first game convincingly at 6-11 with some hard long rallies. However, it was particularly impressive the way Au changed the game, which became a pattern for the rest of the match. From the start of the second game the match was much more technical with Au moving Yip around the court with a great variety of shots. The change of tactic worked allowing Au to take the next 3-games 11-3, 11-4, 11-5 to win the match.

The final was a hard fought five game match. Lee won games 1 and 3 both with 11-9 scores. Au took the 2nd game also 11-9 and after losing game-3, battled back in game-4 taking it 11-4 and pushed home the win with another 11-9 score. It was a hard battling encounter.

“Au is a warrior”, was a comment from a spectator. Continuing, he summarized his feelings for the game “Max had the shots, but Leo made the running. Max simply ran out of ideas, shots and energy. It looked like he [Lee] was cramping in the 5th game as Leo ran in for the kill. “Immense he exclaimed”.