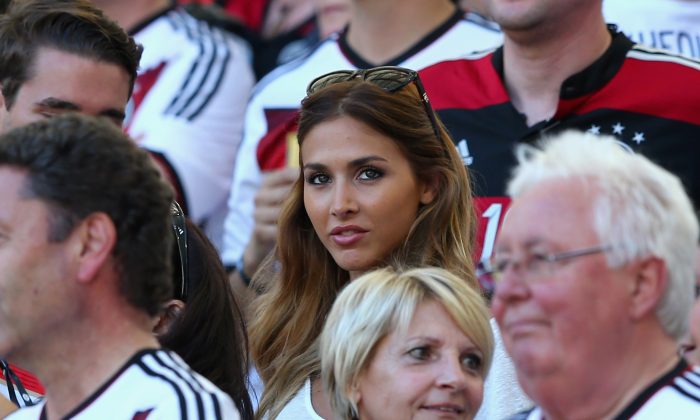 Ann-Kathrin Brommel, girlfriend of Mario Gotze of Germany, looks on prior to the 2014 FIFA World Cup Brazil Final match between Germany and Argentina at Maracana on July 13, 2014 in Rio de Janeiro, Brazil. (Photo by Martin Rose/Getty Images)
Sports

Brommel, 24, was born on December 6, 1989 in Emmerich, Germany, and is currently a model and blogger.

Götze and Brommel were first spotted together by paparazzi last year, according to the Irish Mirror.

Brommel is into music, and released her first single, “This is Me,” after she graduated in 2010, and her second song, “Body Language,” one year later.

Her favorite genre is pop, but she also likes “almost anything.”

“Music is really one of my favorite things in this world,” she said.

Brommel is also into modelling, and she recently featured in the Germany edition of Next Top Model in 2013, finishing in the top 50 out of 17,000 contestants that applied.

In a fan Q & A, Brommel said that the craziest thing she did was bungee jumping, and the fictional character she would choose to be if she could is Hermione Granger from J.K. Rowling’s Harry Potter series.

BERLIN (AP) — At a party 24 years in the making, hundreds of thousands of Germans showed their admiration and adoration for their World Cup winners in a victory parade to the Brandenburg Gate on Tuesday.

The players, in matching black T-shirts bearing “1,” lapped up the love by playing up to the estimated 400,000 people packing the “fan mile” in front of the Berlin landmark.

Fans began lining the street overnight to welcome home coach Joachim Loew’s team and the trophy. Germany’s fourth World Cup, the first since 1990, crowned years of work by Loew to modernize the team, and followed near misses at recent tournaments.

“Of course, it was a long way to the title, and an incredibly tough one in the end. But we’re incredibly happy to be here with the fans now.”

Mario Goetze, the scorer in the 1-0 win over Argentina in the final on Sunday, was greeted with deafening cheers by the sea of fans waving black, red and gold Germany flags.

Midfielder Toni Kroos led the crowd in a chant of “Miro Klose” — a tribute to veteran striker Miroslav Klose, whose two goals took his World Cup tally to 16 and made him the tournament’s all-time leading scorer.

When the players emerged on stage to take their accoldaes, the fans welcomed each of them with a chant of “football god” — giving Bastian Schweinsteiger, Thomas Mueller, Goetze and Klose the loudest cheers.

“We’re just mega-proud of this achievement, after standing here in 2006 and 2008 as third and then as second — and now we’ve finally done it after this long journey, with this sensational team,” defender Per Mertesacker said.

There were problems with the sound, meaning most of the players’ words were lost to the crowd. The supporters didn’t mind, though, and cheered even louder as defender Jerome Boateng, back in his hometown, shouted: “I can’t hear you!”

The team plane landed at Tegel Airport in midmorning after flying low over the “fan mile” — which by then had been packed for hours.

Captain Philipp Lahm led the team off the aircraft holding the trophy aloft, to a chorus of “Football’s Coming Home” from fans on the airport’s viewing terrace.

He was followed by Schweinsteiger, draped in a German flag and sporting a bandage over a cut under his right eye, the result of a tackle in the final.

From the airport, the team set off on a two-hour trip to downtown Berlin in a bus painted with the years of Germany’s World Cup victories: The previous occasions were in 1954, 1974 and 1990.

The team changed shirts and climbed aboard an open-top truck for the last part of the trip to the Brandenburg Gate, crawling through the crowds at snail’s pace.

“It’s indescribable,” fan Till Uhlig from Hannover said of the crowds.

People traveled to the celebration from all over the country: “They’ve all taken their holidays to come here. It’s absolutely crazy,” he said. “We were behind the stage where the bus pulled up. Just incredible.

Berlin resident Katrin Fels, who brought her daughter, said: “We knew it would happen. It was clear from the start of the year that we had the best team. It’s perfect, perfect for all generations.”