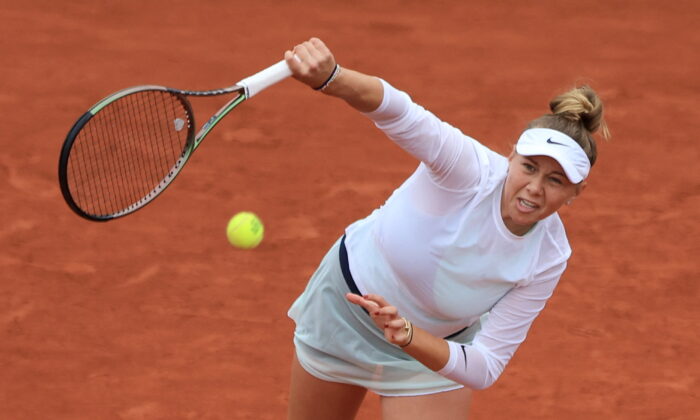 Amanda Anisimova of the United States in action during her third round match against Czech Republic's Karolina Muchova at the French Open in Paris on May 27, 2022 (Pascal Rossignol/Reuters)
Tennis

Anisimova Through to 4th Round as Muchova Retires With Ankle Injury

PARIS—American Amanda Anisimova advanced to the fourth round of the French Open on Friday, after her Czech opponent Karolina Muchova was forced to retire with an ankle injury sustained while leading by a set.

The 25-year-old Muchova, who reached the Australian Open semifinals in 2021, has been plagued by injuries over the last 12 months.

Having ousted Greek fourth seed Maria Sakkari in her previous match, Muchova took a medical timeout to get her left thigh taped after overturning a 5–1 deficit in the tiebreaker to win the first set.

But there was more pain in store for her when she rolled her right ankle and fell while trying to hit a return at 2–2 in the second.

A tearful Muchova hid her face in her towel on an overcast Court Suzanne Lenglen as the physiotherapist heavily taped the ankle and, though she tried to play on, she failed to win another game.

Anisimova was leading 6–7(7) 6–2 3–0 when Muchova finally advanced to the net to confirm that she could no longer continue.

“I got some painkillers, I was hoping maybe it’s gonna kick in and just tried to play fast balls (thinking) that it will maybe work out but it wasn’t working,” Muchova told a news conference before breaking off in tears.

Anisimova said ending the match that way was tough. “I feel very sorry for Karolina…,” she said. “I just hope that she gets the rest she needs and feels better.”

Three years ago the 20-year-old 27th seed became the youngest American to reach the Roland Garros semifinals since Jennifer Capriati in 1990 and made headlines this year by defeating four-time major winner Naomi Osaka in her first round.

She will face U.S. Open finalist Leylah Fernandez for a place in the quarterfinals, after the Canadian eliminated Swiss Olympic champion Belinda Bencic.