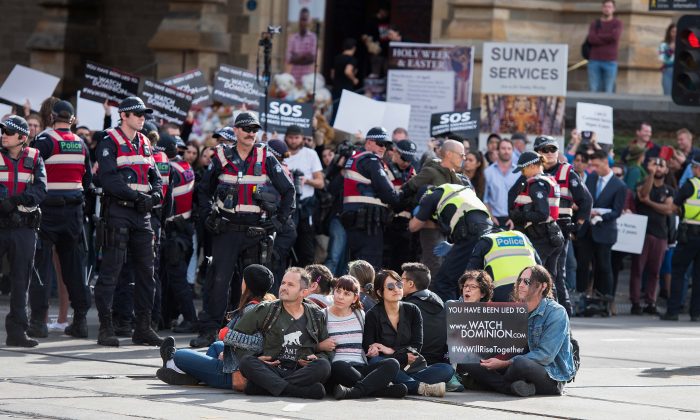 Police move in on animal rights protesters who had blocked the intersections of Flinders and Swanston Street, in Melbourne, Australia, April 8, 2019. (Ellen Smith /AAP Image/Reuters)
Australia

MELBOURNE—Australia police arrested 38 animal rights activists on April 8 after they blocked peak hour traffic in Melbourne in protests to mark the first anniversary of a film about factory farming.

The protests were part of a wave of action in three states, where activists targeted abattoirs in the middle of the night to call for an end to all animal farming.

The documentary, directed by Chris Delforce, used drones and “undercover footage” to film feedlots and saleyards to show how some animals are treated in the production of meat, dairy, eggs, and leather.

“The industry is telling people these animals are being killed ethically, that they are being killed humanely,” Delforce told Australian Associated Press. “It’s the furthest thing from humane.”

Animal rights activists have brought Melbourne's CBD to a standstill – shutting down a city intersection for hours during the morning peak. @_stephanderson #9News pic.twitter.com/nHJo6R0E7U

Protestors blocked a major Melbourne intersection for two hours, stopping trams bringing thousands of commuters into the city. Further down the road, activists blocked the entrance to Melbourne’s aquarium.

Police said they had not been told in advance about the protests.

“We respect the right for people to protest peacefully but we will not tolerate anti-social behavior that disrupts the broader community,” Victoria police superintendent David Clayton said in a statement.

Prime Minister Scott Morrison, in campaign mode ahead of an election in May where farmers’ votes will be key, called the vegan protestors’ plans to storm farms and abattoirs shameful, and that the government would tighten laws to curb such action.

The State Government has announced on-the-spot fines and stricter punishments for animal rights activists who trespass on farms. Report on 7NEWS at 6pm. #qldpol #7NEWS pic.twitter.com/kAYKlDUEqB

No charges have been laid against anyone, he said.

Attorney-General Christian Porter wrote to Privacy Commissioner Angelene Falk to consider investigating Under the Privacy Act the group allegedly behind the activism.

“There are strong grounds to conclude that Aussie Farms Inc is engaging in a systematic effort in collecting, using and disclosing personal information to the detriment of farmers and agricultural producers,” the letter dated on Monday states.

The group wants state and federal agricultural ministers to “acknowledge cruelty in the process of killing animals for food, clothing and entertainment” and to add warning labels on animal products.

Porter also wrote to the state and territory attorneys-general and police ministers to urge them to tighten up their criminal trespass laws.

Nationals senator John Williams told Sky News that fines were not good enough and there was “a limit to what the farmers will put up with.”

“Farmers are not violent people. But when these people go out there and cut the fence and let the livestock out on the road, well farmers might get angry,” he said on Monday.

“And if the chips are down a bit, with the drought etc, you never know what they might do. There might be a punch-up, there might be someone hurt or whatever.

“But these people are promoting the wrong by stirring up and breaking the law.”

Queensland’s Agriculture Minister Mark Furner has pushed for farmers to help police by gathering evidence against the vegan “zealots.”

“What they are doing is breaching the law. I’m extremely angry and have really had a gutful of these people.”

Furner promised on-the-spot fines for activists would be rolled out within weeks.

In Lille, northern France, French anti-meat activists who vandalized butchers shops and restaurants serving meat have been jailed by a court.

Over the past months, several groups of militant vegans and vegetarians have attacked and vandalized slaughterhouses, steak restaurants and shops selling meat, arguing that eating meat is cruel and unnecessary.

A 23-year-old man and a 26-year-old woman, who are a couple, were jailed for 10 and six months respectively for some 15 attacks between December 2018 and February, including breaking shop windows and attempts to set shops on fire with cans of gasoline.

Compared with Germany, the Netherlands and some northern European countries, vegetarianism is relatively rare in France, where beef stew, pork chops and coq au vin are popular dishes.

By Sonali Paul from Reuters, and Christine McGinn and Pierre Savary from AAP