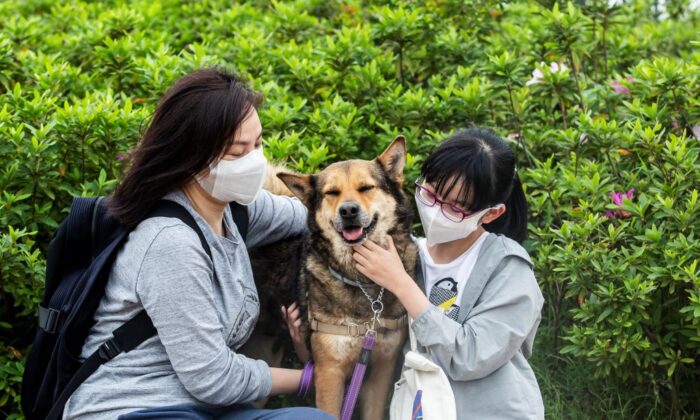 Amy Tran and her daughter Serene Ho cuddle their newly adopted dog Pepper in a dog park at Kai Tak Runway Park in Hong Kong on April 11, 2020. Work-from-home restrictions and the cancellation of school have provided Amy Tran and her daughter Serene Ho, who were looking at getting a dog, the opportunity to rescue Pepper, giving them time for Pepper to settle into the family and Serene to learn how to care for a dog. (ISAAC LAWRENCE/AFP via Getty Images)
Southern California

Animal Lovers Turn to Adopted Pets for Company During Pandemic

Toiletries aren’t the only hot commodity during the ongoing pandemic—one Orange County animal shelter says pets are being adopted at an unusually high rate as people seek furry companionship during the lockdown.

“Adoptable animals in general are in short supply right now because as soon as they become available, the animal shelters have a lot of interest from the public to adopt them,” Beres told The Epoch Times via email.

“People actually have their computers or phones set up to alert them when an animal becomes available for adoption at the local animal shelters.”

The heightened demand for pets contrasts with a decrease in animals abandoned at the shelter. Beres said it’s possible the pandemic has strengthened owners’ commitment to their four-legged companions.

“Since the COVID-19 pandemic began around mid-March 2020, we have experienced a decrease in pet intakes,” he said. “This could be due to more people staying at home than before the pandemic and having more time to spend with their pets, as well as more time to keep an eye on them.”

Dogs are the most commonly adopted animal, followed by cats, and then smaller animals such as rabbits.

The Laguna Beach Animal Shelter has served the residents of Laguna Beach and Laguna Woods since its inception in 1975. In addition to providing intakes and adoptions, the shelter provides for animal’s medical needs, neutering and spaying, and behavior reinforcement. It provides temporary care for sick, injured, strayed, and abandoned animals.

The facility houses dogs, cats, birds, and a small number of other animals. Abandoned animals usually have a claim rate of 80 percent, due to the small size of the community.

It is funded by the City of Laguna Beach and private donations.