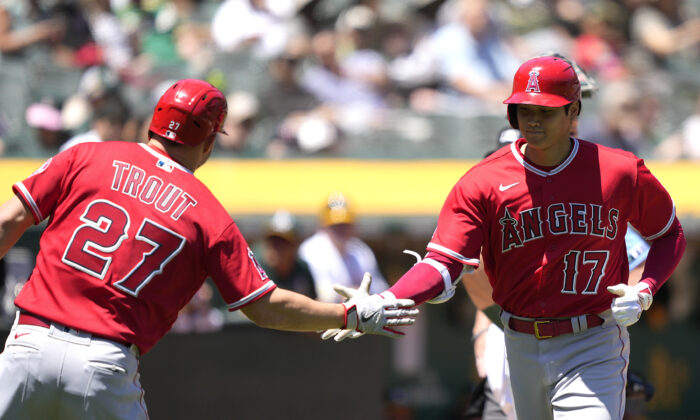 Shohei Ohtani #17 of the Los Angeles Angels is congratulated by third base coach Mike Trout #27 after Ohtani hit a two-run home run against the Oakland Athletics in the top of the firs inning at RingCentral Coliseum, in Oakland, Calif., on May 15, 2022. (Thearon W. Henderson/Getty Images)
Baseball

The Los Angeles Angels’ Patrick Sandoval gave up one run, and Shohei Ohtani homered in the first inning to propel the Angels to a 4–1 win on Sunday and a 3–1 series victory over the home team Oakland Athletics (15–22). It was the first series win for the Angels in Oakland since May 2019.

After a double-header that was split by the two teams on Saturday, Sandoval fought to contain the A’s offense through six and one-third innings.

“I’ll take that every time, especially with the stuff I had today,” said Sandoval. “I’m still trying to find my changeup and luckily I got away with 6 1/3. I don’t want to get into jams but when you’re in them, you’ve got to get out of it, and I think I did a pretty good job of that today.”

Sandoval is 2–1 for the season in six starts in 33 innings, with a 1.91 ERA, and 31 strikeouts—ranking sixth in the AL among pitchers with at least 30 innings.

“Not great command overall, but he’s capable of doing that,” said Angels manager Joe Maddon. “It’s hard to put him into play hard. It’s hard to square him up. So even when he’s off a little bit with this command, he throws a variety of pitches that make it difficult and even if he gets a baserunner or two, he can get out of it because of his swing-and-miss [pitches].”

The 25-year old Sandoval is a local who played baseball at Mission Viejo High School in Orange County. His record was 9–3 with a 0.97 ERA, and he played collegiately at the University of Southern California.

Sandoval was drafted in the 11th round of 2015 by the Houston Astros, and he was traded to the Angels in July 2018 for catcher Martin Maldonado.

He was then promoted to the major league in August 2019, pitching five innings in relief against the Cincinnati Red in his debut.

“I think Patrick Sandoval is one of the better lefties in the game right now,” said A’s manager Mark Kotsay. “He has command of five pitches. The slider just has some depth to it. Our right-handed hitters were swinging over the top of it. In my vision, he’s a top-notch left-handed pitcher in this league.”

Angels got on the board early as Mike Trout singled to right center field, followed a two run shot by Ohtani, eighth of the season, that went 425 feet deep, over the right center wall, and into the second deck.

The A’s got their lone score in the bottom of the third with Sandoval walking Jed Lowrie to begin the inning, followed by a Ramon Laureano single to right.

Chad Pinder then made a sacrifice bunt to Sandoval moving the baserunners to second and third base. Sean Murphy then grounded out to shortstop Andrew Velazquez, allowing Lowrie to score.

The Angels increased their lead in the eighth inning, 3–1, beginning with Taylor Ward’s single to right field. Ohtani then grounded out to second, moving Ward to third. Anthony Rendon then got the RBI with a single to center scoring Ward.

In the ninth inning, the Angels added another run starting with a single to right center field by Brandon Marsh—who would move to second after a ground out to shortstop from catcher Chad Wallach.

Marsh moved to third from Tyler Wade’s  ground out to shortstop—before Velazquez’s double to right field, scoring Marsh for the final score of 4–1.

Sandoval equalled his season-high 101 pitches, and was relieved by Jimmy Herget in the seventh inning to get his first career save in 2 2/3 scoreless innings.

“I was a closer in the Minors all the way to Triple-A and it was always a goal of mine to get one in the big leagues, and I got it the hard way,” Herget said. “But [Sandoval] was unbelievable. Just a gutty performance. We played 18 innings yesterday and didn’t have a lot of arms available, so it was unbelievable for him to go out there and grind the way he did.”

The Angels travel to face the Texas Rangers in a three-game series beginning Monday evening, May 15th, with RHP Noah Syndergaard (3-1, 2.45 ERA) on the mound.

The A’s start LHP Kyle Logue (1-1, 1.35) against the Twins in their home opener Monday of a three-game series.