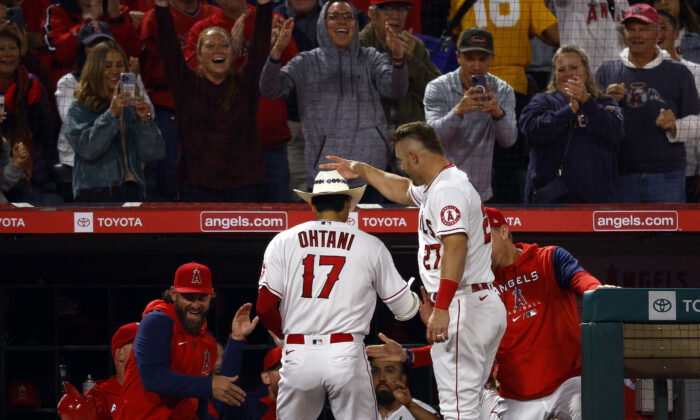 Shohei Ohtani #17 and Mike Trout #27 of the Los Angeles Angels celebrate a home run against the Tampa Bay Rays in the sixth inning at Angel Stadium of Anaheim, in Anaheim, on May 9, 2022. (Ronald Martinez/Getty Images)
Baseball

The reigning American League MVP Shohei Ohtani, of the Los Angeles Angels, hit his first career grand slam, of two homers, in a 11-3 win over the Tampa Bay Rays in Monday’s series opener at Angel Stadium. The Angels improved to 20–11, extending their lead in the AL West over the Houston Astros by one game.

Ohtani was 3-for-4 on the day tying a career high five RBIs, while raising his batting average to .252 for the season with six home runs and 21 RBIs.

“I’m definitely having the most fun right now,” said Ohtani through interpreter Ippei Mizuhara. “I’m not having the best offensive year right now but the team is winning, which is the most important thing. We’re going to try to continue the hot streak.”

Ohtani hit both of his home runs to the opposite field, after he had been practicing to improve from an early season slump.

“He’s always been an honest person, right?” said Angels manager Joe Maddon. “He has looked better. The ball has gone to left-center. He was just getting beneath everything, but now the angle is better off the bat. Wow, if we can keep him right there for several months.”

It was his eighth career multi-home run game, and his second of the season. In five seasons in Japan with the Nippon Ham Fighters, the 6’4″ power hitter never achieved the coveted grand slam.

“Shohei is going to get his swing going and the last couple games he’s shown that,” said teammate Mike Trout, who also homered in the sixth. “If he’s hitting the ball the other way like that, that’s Shohei. He doesn’t need to pull the ball all the time.”

Walsh hit a three-run homer in the fourth inning that gave the Angels the lead for good, while Trout (two-run homer) and Ohtani (solo homer) hit homers on back-to-back pitches in the sixth inning that provided Angels starter Noah Syndergaard and the bullpen all the runs they would need.

Syndergaard (3-1) gave up one run on seven hits and one walk in 5 1/3 innings to get the victory, but he had to work his way through several jams to get there, making 97 pitches. In all, the Rays were 1 for 16 with runners in scoring position.

The Angels got most of their production from the top of their lineup, as leadoff hitter Brandon Marsh, No. 2 hitter Trout and No. 3 hitter Ohtani combined for seven of the Angels’ 11 hits.

Randy Arozarena’s solo home run off Syndergaard gave the Rays a lead in the fourth inning, but it lasted only until the bottom of the fourth. Rays starter Jeffrey Springs (1-1) was perfect through three innings, then retired the first batter in the fourth before Trout ended the string with a single.

Ohtani followed with a single and one batter later, Walsh hit a three-run homer. In the sixth, Trout hit a two-run homer and on the very next pitch from Rays lefty Jalen Beeks, Ohtani hit his first homer of the night.

The Rays pushed across a couple runs in the top of the seventh, but the Angels responded with five in the bottom of the inning, the last four coming in on Ohtani’s slam.