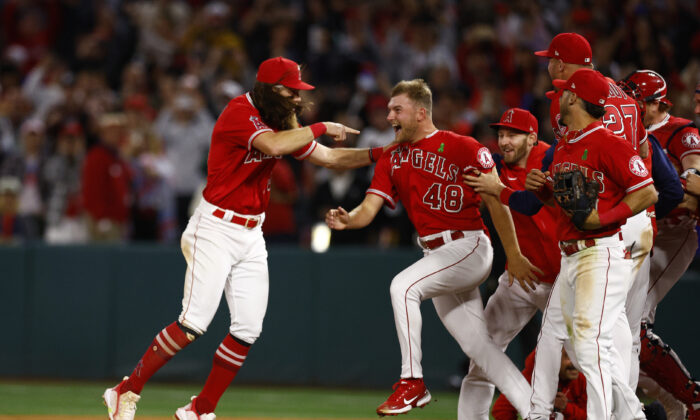 Reid Detmers #48 of the Los Angeles Angels celebrates a no-hitter against the Tampa Bay Rays at Angel Stadium of Anaheim, in Anaheim, Calif., on May 10, 2022. (Ronald Martinez/Getty Images)
Baseball

The Los Angeles Angels maintain their AL West Division lead (21–11) as rookie left-hander Reid Detmers became the 12th in Angels history, and 25th rookie ever, to throw a no-hitter overwhelming the Tampa Bay Rays (18–13) 12–0 in Anaheim, Calif., on Tuesday.

As the 10th overall pick from the University of Louisville, the 22-year-old Detmers began the year as MLB’s No. 1 left-handed pitching prospect.

“It’s something I’ve dreamed of ever since I was a little kid,” said Detmers. “I didn’t think it would ever happen. I don’t even know. I probably won’t even remember this tomorrow morning.”

Detmer improves to 2–1, but manager Joe Maddon was asked before the game if there was a chance Detmers could be sent back to the Minors for more training.

Detmers had not pitched more than six innings, including 14 Minor League starts, and neither had thrown more than 97 pitches in a single outing. He came into the game with a 6.33 ERA in 10 career starts.

He was sensational through five innings, but walked Taylor Walls to begin the sixth. However, Detmers was able to escape potential trouble two batters later, getting Kevin Kiermaier to ground out into a double play.

“I remember talking to Wise and he told me to pound the zone,” added Detmers. “With two strikes on the last hitter, I was shaking a little bit, but other than that I tried to keep myself composed. It just still hasn’t sunk in.”

Rays’ Yandy Diaz grounded to shortstop for the final out as Detmers threw a total of 108 pitches in his first masterpiece no-hitter.

The Rays’ only other baserunner was Brett Phillips in the seventh inning reaching first on an error by Angels first baseman Jared Walsh.

The Angels’ most recent no-hitter came from a combined effort by Taylor Cole and Felix Pena in 2019 versus  the Seattle Mariners, while the most recent solo no-hitter was authored by Jered Weaver in 2012 against the Minnesota Twins.

“It’s life-altering, in a sense, as a young man and a Major League player,” said Maddon of Detmer. “Hopefully, we’re going to get a lot of residue at the end of that, because he’s capable. That’s how he should pitch and that’s what he should look like more often.”

Detmers usually relies on his curveball and slider, but Angels catcher Chad Wallach, who caught his first no-hitter, saw that the changeup was so effective that Detmers threw it 24 times.

“We had a plan going into the game, but we pivoted a couple times,” said Wallach. The changeup was probably not the pitch we expected it to be. He spins the ball a lot. But we saw how good the change was in the first couple innings, and we just ran with it.”

The Angels offense was red hot with 18 hits. Mike Trout hit two homers over center field, on 3-for-4 at bat, for three RBIs.

Trout’s first homer came in the second inning, 425 feet, with two outs to add three runs in the inning for a 5–0 lead. The second came in the eighth inning, 421 feet, scoring Marsh to make it 10–0.

Wallach hit a three-run blast 411 feet to left field in the third inning, and Anthony Rendon added a 411 foot shot to right-center in the eighth inning scoring Shohei Ohtani.

Rays starter Corey Kluber gave up the loss dropping to 1-2, gave up eight runs on 11 hits in three innings, and struck out two with no walks.

The Angels have a 2–0 series lead going into their third and final game today at 7:07 pm PT at Angel Stadium, with television coverage on FS1.